The Return To Old Trafford

Share All sharing options for: The Return To Old Trafford 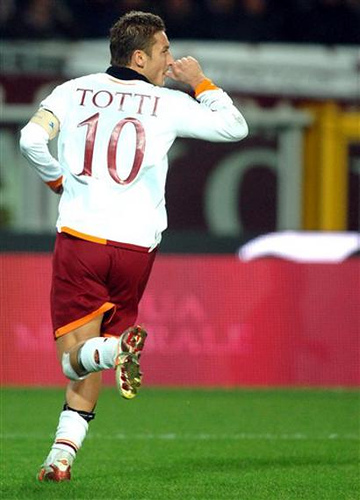 I haven't seen the Inter game. I lost a fight with some lumber. So when I finally turned the game on, I saw it was 3-1, Roma down to 10 and I turned it off. I'm also pretty sure I will not watch the Inter game at any point in the near future. Without having seen the game I will say this: I am much more concerned by Roma's inability to close out the cheaters and the Viola than I am Roma losing by 3 goals to Inter after going down a man on a stupid stupid move after playing 4 games in 10 days. They were gassed, anytime you go down a man you have that much more space to cover and that much more work to do, making you that much more exhausted, and you're doing it against a team with a billion dollar South American payroll. What do you expect? 3 points? Please. Anyway, it's Week 6. No time for panic or overzealous jubilation.

That said, I don't know how much of the blame for this goes to Luciano Spalletti. His refusal to rotate in youngsters and a few new faces really is worrisome. I'm not looking for him to go take a seminar taught by Rafa Benitez, but I expected every single player to take a seat for at least one of the Juve, Fiorentina and Inter games. That didn't happen for a few faces, some who also played against Reggina and Dynamo Kyiv. This early in the season it's difficult to see any reasoning for that, especially with the Old Trafford game impending. Whether or not this was poor misjudgment, I'm not really sure, but it appears that way.

I'm keeping this simple: it's a new year. Last year is gone. It was a very different team. Turn the page. Move on. I can guarantee ManYoo fans won't, though. Whatever.

ManYoo: Here's their roster. Other than that, I really couldn't give a damn.

I don't care if King Alberto is 12% fit, there is no way in hell David Pizarro can play this game. He'll get eaten alive.

Roma: Old Man River is out, so aren't Ferrari, Taddei and Cassetti. Nine times out of ten you'd rather have Panucci in a game of this magnitude right now, but Roma will have to contend with a ton of speed on the flanks, and that may require the services of Cicinho. What's more is the state of the back line...again. After seemingly getting everyone healthy, the back is looking very thin, especially at the deepest position on the squad (RB). An injury or a Giuly-like-move means what for the back four? Mancini returns to his old ways? Ugh. Taddei is another huge loss. Despite being far from hitting on all cylinders this season, he provides so many of those vaunted "little things" and defensive assistance from the wing, that his absence will be sorely missed against an attacking side like United.

ManYoo: Edwin Van Der Sar is out, which is always nice, while Nemanja Vidic and Wes Brown are doubtful. Missing Van Der Sar will be hugely in Roma's favor, although Kuszczak isn't all that terrible, and I have no idea what to say about Vidic and Brown. Having both in the stands would be nice (Vidic especially), but everyone "doubtful" these days seems to find their way into the lineup. Doubtful is the new "Almost Definitely." Silvestre and Neville too, but no one really cares.

Speed On The Flanks v Speed On The Flanks: Two different starting fullbacks from last year, two much faster players in Max Tonetto and Cicinho. A huge key in locking down The Fake Ronaldo, Giggs, etc etc. Of course that's only the beginning. But keeping up with those two will play a large part in minimizing their impact on the game.

DDR & King Alberto v The Center of Old Trafford: All we can do at this point is pray that AA steps onto the pitch in Manchester. Daniele De Rossi will be there and certainly make his presence known, but having the pair together is the key. Ask Old Whiskey Nose, he's put both on his shopping list at one point or another. These two have been tremendous in locking down midfields; and while sending the balls out wide is never a good thing against ManYoo, they can at least close down shooting lanes and therefore limit scoring opportunities. Even Little David's most ardent testicle-tuggers will echo this is a disaster matchup for him.

Doni v God Help Us All: Doni being a bit liberal with his positioning and adventurous with his decision making could lead to absolute disaster. If he plays it tight to the vest, smart and lets his skills - not his risk-taking - shine, then play should be decided on the field, not by blunders between the goal posts. That's all we can ask for.

Quick Passing v Close Down Defenders: The one thing which has defined Roma over the last few years - quick, fluid gameplay - will face off with the typical Prem defensive style of athletic physicality giving little space to players on the ball. Giving Roma space is dangerous, we know this. What may be more dangerous, though, is giving a highly motivated Roma openings for runs and pinpoint passes, ending up in chances on goal (on a backup keeper, no less). Playing close and tight to Roma is fine. But ManYoo messing up those chances will open up Roma's game and create beaucoup chances.

Ronaldo, Scholes, Rooney, Giggs and Tevez are all deadly. As deadly as it gets. I really respect the last three for their work rate and team play. Scholes, eh. Ronaldo is one of those people that you wish could just swap places with someone spending their life confined to a wheelchair because they deserve so much more and he doesn't. Unfortunately, he's talented and will be a/the focal point of their offense and will require help defenders at times, hoping to expose a Roma defense which has been able to hold, but not close down opponents recently, with the other three. This is why those two fullbacks will become so important in this game. Keeping pace is nice, containing him will be most important.

I won't pretend I know much about ManYoo this year, or last, either. Though from all accounts they haven't looked all that impressive. I've watched them play once this year, and that was the game when they played with 12 men against Chelsea's 10. Not exactly a proper representation. Nor can I speak for Roma's last game. Not that I want to, either. What I am worried about is that attacking lineup from ManYoo combined with Roma's fatigue, spreading through the starting XI like syphilis in a college dorm. I trust Spalletti, but I really question his moves and decisions over the last two weeks (especially the substitutions). It's one thing to respect your opponents. It's another to treat every team as if they're God's gift to football. Knowing when to rest your players and playing to specific strengths off the bench is one of the main jobs of a manager. The Grand Imperial Poobah hasn't been doing that, and as a result, the boys are as exhausted as I am right now (I'm rocking the head bob). Hopefully the adrenaline will take over and propel the fellas to a full 90 minutes of fury and revenge.

The one thing I'm not worried about is the unquestionable pride Roma has and their great desire for revenge. Not only for last year, but also for the abysmal performance spearheaded by Lulu Gulu's The Hand of Lucifer (Ludovic will now bear the nickname Roi Demeuré). Recall what happened after last year's Old Trafford trip? 4-0 victory over Sampdoria and 3-0 over Inter at the San Siro (I still don't know why they haven't taken that penalty out of the official stats - when it's that bad, something needs to be done). And a reaction like Francesco's would be more than welcome. They know how to bounce back, and despite their seeming propensity for in-game meltdowns, when they have a chance to sit back and cool down, they know how to react and react well. At the very least, they have a fighting chance.

The boys want to exact revenge, but they also need to play smart and limit the exposure to their back line, because we know how well ManYoo can quickly hit out on the counter. And while this does have significant mental and emotional meaning - this is in no, way shape or form a must win game. The must win games are at home and against the lesser teams, meaning Dynamo Kyiv and Sporting. Going to Old Trafford and returning home without a result will not kill their Champions League campaign. In fact, getting it out of the way - regardless of a result - will be nice. It makes the second half of the group stages and fall/winter that much easier. That said, I'm with Francesco. 7-0 would be simply peaches.

While I feel confident going into Old Trafford because of the team's will, I think the fatigue will limit them to scraping out a draw. But I won't be surprised with any result.

I won't pretend like Francesco is infallible. He's not. He's the best player in Serie A. He's the best Italian player in the world. He's on the short list for best player in the world. He is Roma. He is an icon. He has done more for this team than anyone could possibly imagine, especially Sky Sports "pundits". But he is not perfect. He can disappear. He can have off games. And he is not the rah-rah leader that some others are (but I in no way am willing to suggest he should not be wearing the armband - never ever).

* - I'm traveling out of the country and am supposed to be busy during the game. No idea if I can watch it, but I'll be back one of these days with the juice. I'm moving out of the US so posts will be sporadic for a few weeks.