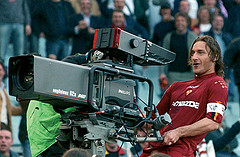 For anyone who saw the Cagliari game last weekend, expect this one to play out the same. The result doesn't matter except for pride. Roma and Messina are at the same place on opposite ends of the table, 2nd from top and bottom, respectively. A win ensures Messina will finish their season out of last place in Serie A, giving that dubious honor to Ascoli. Roma would like a win to brighten up a lackluster finish to the Serie A campaign. A loss would mean three losses in a row to Torino, Cagliari and Messina. Teams who all fought the relegation battle to the very end. That is not what you would call momentum.

As for the Totti watch, it's simple: Two goals to surpass Afonso Alves and have a chance at the European Golden Boot*. It's going to be all Francesco all the time. This game provides him with an ideal chance at those two goals due to Messina's defensive deficiencies away from Sicily. Since sending starting netminder Storari to Milan during the January window, Messina have a -16 goal differential in 16 games. In their away games this year? -25. It's fairly self-explanatory from there.

The kids are gonna factor; Faty, Rosi and Aquilani will probably play, hopefully Okaka Chuka will be given a chance on the pitch as well. If you happen by a Roma game at any point next year, stop and see if this kid (17) is playing. He was headed to Milan and had even taken his official team guide picture before Roma came in and poached him at the last minute. Tall, fast, strong, good in the air and a great sense of positioning around the net, he's a future 20 goal scorer. True wonderkid.

The focus will be to get Totti two-plus goals, avoid embarrassment versus a team destined for Serie B and avoid crippling injuries. Enjoy.

Quick note: The game of the weekend is Catania v Chievo(Live Sunday on Fox Soccer at 6am or replayed at 2pm). Both teams are relegation contenders and will be fighting for survival, and those games can be more exciting than games deciding championships. Another reason is Catania. I was leafing through a World Soccer mag from March and noticed the Serie A standings. As of Feb 4th, Catania was in 5th place on 30 pts with Lazio in 4th on goal differential. Yes, fifth. Now, 16th. And that's only due to Reggina's(-11) and Siena's(-1) point deductions. Otherwise they would be minding the last relegation spot. People continually talk about Palermo's fall, how about Catania?

* - It's getting really hard to bet against Ruud van Nistelrooy at this point. Ruud is running around like a man possessed and knocking in goals ad nauseum. A ridiculous 8 in his last six(one today), he's one behind Totti with two to play (v. Zaragoza & Mallorca). If Real wins both, they are assured of the title (who knew?), so there's little chance of a let up from the Dutch star. If he does continue like this, he has to be shortlisted for the Ballon d'Or. So who's eating more crow at this point, van Basten or McClaren? My vote is for Marco. Not only did he drop him, but then Ruud turned down his offer to return and made him wait. Ouch. Brilliant move to drop Ruud and start Dirk Kuijt. Absolutely brilliant.