Totti is King of Europe (For Now)

Share All sharing options for: Totti is King of Europe (For Now) 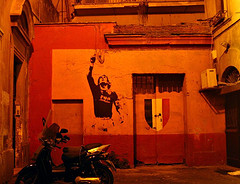 It's hard to get excited with The Incredible Hulk, excuse me - Ruud van Nistelrooy, still on his rampage with two games left. But as of this moment, Francesco Totti is the leading scorer in Europe, with 26 goals and 52 pts, one ahead of Afonso Alves. Francesco got off to a blazing start with a goal in the 9th, and he and the rest of Giallorossi parked themselves in front of the Messina goal for the remainder of the first half. It looked like he would fall short in the 63rd when he had a penalty saved by Alessandro Cesaretti. The assault continued and Francesco got his revenge 10 minutes later as he put one right down the middle to take the Euro lead. Also, officially now, Totti is Capocannoniere, but it's been unofficial for a few weeks now so the celebration will be much more subdued.

It may mean little to some people, it's not a team accomplishment, but Totti really does deserve this individual accomplishment. Throughout his career he has given his all to Roma, and stayed loyal even though Real Madrid had put in an absolutely massive offer for him. Last spring he broke his ankle in a horrific collision and rushed himself back, only to be criticized for his World Cup performances. Nothing atypical, the failures of the Azzurri have usually been placed on Totti's shoulder. Most people don't know that he will be having surgery early this summer to remove the hardware that is currently holding his ankle together, and doctors have said he will not be 100% until next September. If this isn't 100%, Serie A should take warning.

As for the rest of it, a few observations:

1. It has been rumored Roma are close to acquiring 34-year old forward Cristian Rigano, currently on loan from Fiorentina to Messina. Before the game I was completely against this, after the game I'm only moderately against it. Despite the two goals, I don't think Roma should be in the business of picking up players in their mid-to-late 30's. Unless they want to bring Batistuta out of retirement. That's fine.

2. Gianluca Curci needs to go out on loan. He really needs at least a full season of starting in Serie A before he is ready to take over in Rome.

3. Chievo is heading south to Serie B, should Roma start printing up Franco Semioli shirts? He's made no bones about where he wants to play. He's turned down numerous offers and said the only place for him is Roma. Eat it, Wenger. A nice clearance price due to relegation will suit Roma just fine.

4. Wilhelmsson: Thanks for your service since January. Now get the fuck out.

5. This is truly the year of Italia. The World Cup win, the Champions League win, the likely winner of the Ballon d'Or(Kaka) plays in Serie A and now the likely European Golden Boot winner is Italian. That's what you would call a sweep.

6. I'm guessing Crespo cut his hair in an attempt to disguise himself from Mourinho & Co. Maybe they won't recognize him and they won't call him back. It's the only explanation.

7. Came across this little quote from Zlatan in an interview yesterday:
"Who is the most beautiful girl in the world?"
"I haven't met her yet, but when I do, I will date her."

It's a wonder his head can fit in the San Siro. What a phenomenal ego.

8. Alessandro Cesaretti made his Serie A debut today at 39 years of age. A big round of applause to him. Bravo.

9. I'm going to change my answer to the question from yesterday, who has eaten more crow this week? My new answer goes to ESPN, who put Chuck Liddell on the cover of their magazine and billed him as the world's greatest fighter in their singlehanded attempt to make the UFC main$tream(for those not in the know, Liddell is a UFC/Mixed Martial Arts fighter). Only to wake up in the morning and see that he had been KO'd in under 2 minutes last night.

Newsflash: The best fighter in the world doesn't get KO'd in under two minutes.

10. Oh, and Totti has spent most of his career playing as a midfielder. I'm curious as to how many people have won the Golden Boot doing that.

11. Just watched the highlights. I hadn't noticed how blatant Rigano's foul was that awarded Roma the penalty that Totti missed. He just grabbed his shirt and dragged him to the ground, he had to know how that would end up. I wonder if that was his way of telling Roma that he wanted to play for them? Maybe he thought giving Totti his chance at the Golden Boot would endear him to the Roma hierarchy? I smell a conspiracy theory. Although in Italy, this would be nothing new.

Congrats to the boys for a great season and congrats to Totti for his immense success.