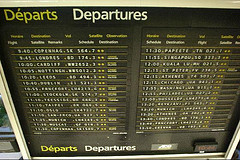 The Serie A season is now over and Roma can consider it a success. Next year they will take part in the Champions League group stage and defend their Coppa Italia championship, as well as undoubtedly compete for their fourth Scudetto. A few new faces are surely on the horizon, and it seems the Sensi family have earmarked an impressive 20-30 million euros for new signings. Not a regular occasion for Roma so one has to think that the rumors of Emirates Airlines coming in as sponsors might just be true.

Over the few days I'll break out a Giallorossi summer preview of probable departures and arrivals. The great majority of the players on these lists will not move anywhere. At the end is the probability of a move. No, I didn't create an advanced algorithm to determine the scientific and mathematical approximation of said player moving to or from Rome. It's just what I think the chances are from my research and whatever half-intelligent thoughts I pull from my ass. With that, let's start with some possible departures:

* - Hopefully Roma tiptoed lightly when they informed him that he would be leaving, he's pure evil.

Christian Wilhelmsson (RW) - Rumors are persisting that Roma may be able to take Christian for free or at a reduced price, simply because Nantes doesn’t want to, or cannot, pay him. Fair enough. For a relatively small, soon to be relegated French club a flashy inconsistent winger at 1.75 million euros per annum does seem a tad unnecessary. Which also seems to imply that Roma have told Nantes they can expect him back at the end of the season. Quite simply, Roma need players of a higher class. Judging by his inability to follow Spalletti’s orders as the season progresses it seems more and likely he will find himself on another roster to start next year’s campaign. Departure probability: 7/10

* - Such a shame, how thou shall be missed, Oksana. As an aside, let’s hope Christian somehow gets moved to CSKA London. I doubt Abramovich could keep his hands out of the cookie jar with another young, virile Russian-born femme fatale whose main goal in life is to be famous. Here’s to hoping.

Philippe Mexes (CB) - Philippe’s agent revealed last week that it’s time to pay up. Fair enough, he deserves it. A few teams have supposedly put through some substantial offers, and Juve seems to be heavily enamored. Although Milan are always lusting for defenders. In a few years time they may be playing 10 behind the ball and Kaka up front. Mexes is the engine of the back line, and - though he may not have the untouchable status of Totti and De Rossi - he is nearly irreplaceable. Philippe has expressed his desire to remain in Roma, expect the Sensi family to open up those checkbooks. Departure probability: 1.5/10

Matteo Ferrari (DF) - What’s today again? Yet another in the class of pay up or ship me out. Matteo wants to be paid like a starter without being a starter. Of course he does. Departure probability: 5/10

Ricardo Faty (MF) - Ricardo has come out and stated how proud he is to wear the Giallorossi kit and how much he has enjoyed his time in Rome. And that he wants a transfer. Well, specifically a loan deal to advance himself as a footballer with more playing time. Very mature decision for the young man but Spalletti is a big fan. He may be in line for a lot more playing time at the Olimpico than he dreamed. Loan probability: 4/10

* - My unabashed love affair with Daniele De Rossi will live on.

Samuel Kuffour (CB) - Nothing says we want you here like paying a player to go out on loan. Kuffour doesn’t want to be in Rome, Roma doesn’t want him. Everybody’s happy. Departure probability: 10/10

Vincenzo Montella (CF) - With the inevitable departure of Tavano, Vincenzo could be welcomed back into his old position on the bench with open arms. After a fairy tale start at Craven Cottage things plummeted and his time in England is over. A move elsewhere could be possible due to his enormous contract(Possibly a return to Empoli or Sampdoria). More likely is one last go around with Roma as he rides into the sunset. Departure probability: 4/10

Gilberto Martinez (DF) - Raise your hand if you knew he was on the squad. Hasn't played a game all year. Injuries or not, he's not good enough for Roma. Departure probability: 9.5/10

Mirko Vucinic (ST) - This could be filed under departures or arrivals. Roma have an option to buy him after this year for 7.5 million euros on a four year contract or give him a one way ticket back to Lecce. Rumblings from la citta eterna seem to imply that Roma favor the former, and would like to buy him on a permanent basis. A remarkable talent at a young age(19 goals in 29 Serie A games at 21 years old), he has struggled to find the same goal scoring form this year. However, it is not easy to immediately walk into the Stadio Olimpico and play in Spalletti’s style. Another year of study and evaluation are more likely before making a final verdict on Mirko. If he really does not fit into the system, he will be 24 and still young enough to require a sizable transfer fee and limit the negative impact on their investment. The reward seems to far outweigh the risk here. Departure probability: 3/10

Stefano Okaka Chuka (ST) - There is a large difference between sending a player out on loan to gain starting XI experience and sending out a phenom when he could greatly benefit the parent club. Stefano falls into the latter category. Even though he will only have been 18 for two weeks at the start of the season, he could end the year as one of the 6 or so best players on the club. Yes, you read that correctly. He's that talented. Loan probability: 4/10

Christian Chivu (CB/LB) - Apparently the defensive unit got together and decided collectively to demand a pay raise. Bad news. Tuttosport claimed that Chivu agreed to a contract with Juventus already(for those who don’t speak Italian, Tuttosport translates to "Juventus Homeboys"); therefore, it means absolutely nothing. Chivu came out immediately afterward and denied that he wants to leave Roma and that he is actually about to negotiate an extension. Expect him, along with Mexes, to sign a new deal around 3 million euros a year soon. Departure probability: 2/10

Valerio Virga (MF) - Seemingly due for a loan to get some valuable starting XI experience or a chip in a cash plus player transfer deal. Probably best for him. Departure probability: 6/10

Gianluca Curci (GK) - The Azzurrini’s starting netminder, Curci was replaced by Doni as Roma’s number one last year. At 21, the future is very bright, but he could undoubtedly be best served next year as a starting keeper at a Serie A low to mid table club, likely one fighting relegation. Livorno have expressed interest in having him replace Amelia. A swap deal is rumored with Cagliari for Antonio Chimenti. Chimenti comes back to serve as Doni’s backup and Curci goes to Cagliari to start for them and gain some much needed experience. Perfecto. Transfer probability: 2/10 Loan probability: 7/10

Rodrigo Defendi - Thanks, but no thanks. Departure probability: 9.5/10

David Pizarro (MF) - He wants no part of going back to Inter and he seems to have found a home in the Olimpico. The co-ownership deal with Inter requires mutually agreed compensation but there is very very little chance that he does not sign a permanent deal with the Giallorossi this summer. Departure probability: 2/10

Matteo Brighi (MF) - Fun wikifact about Matteo: He became the highest rated player in FIFA 2003 with a 97 overall rating. Seriously, if Spalletti can’t find a spot on his roster for the greatest player in FIFA 03 then something is wrong in the eternal city. Come on. Departure probability: 7/10

Edgar Alavarez (MF) - Speedy Honduran winger on loan. Maybe he can convince Suazo to join. Not sure of their relationship but let’s hope they’re BFF. Could be a huge negotiating chip. Departure probability: Directly proportional to Suazo?

Other loanees - Most of them will probably go back out on loan or sold or ‘co-ownershipped’ with little fanfare. I can’t express how little I care in words.