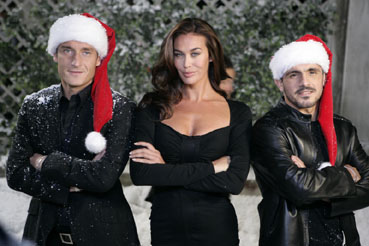 Here's to Totti & Co. bringing early Christmas gifts to Rome in the middle of the summer (As if I needed to say this, but I'd love to get Megan Gale for Christmas. Santa, if you're listening...). Most of these players won't even get a whiff of the Giallorossi shirt. Considering Spalletti's recent statements regarding his trequartista (there is only one striker and his name is Totti), then if any of these men do show up then they will likely find themselves doing a number of things: a) riding pine b) playing out of position at times c) playing up front with Totti when Luciano switches to a 3-2-3-2 on holidays and/or d) probably being mildly unhappy. However, that shouldn't stop a little speculative fun, because one will almost definitely come out of this group. The men up-front:

* - I’ve heard this quoted figure for a while now and recently Mexes’ agent stated that this is their working cap. Message boards around seem to think some people make more(Montella, Perrotta, De Rossi to name a few). For the moment, I’ll trust the people who work directly with the club on a financial level. I could be wrong though, agents have lied once or twice.

Update: Fiorentina director Andrea Della Valle has announced that Toni is Bayern-bound. The Juventus fire sale was one thing, but I really hate seeing Italian stars play abroad. But if this is out of respect to Fiorentina, that he refused to play against them with another Italian team, then bravo, Toni. I bet Bayern draws the Viola in the UEFA Cup. It would only be fitting.

Roque Santa Cruz (FW) Bayern Munich - Tall, lanky striker or deep-lying forward, his huge talent has been overshadowed by constant injuries. Has been at Munich for 8 years and finally has had enough of riding the pine and will be allowed to leave this summer in what can only be described as a complete overhaul in Munchen. Roma are undeniably on his short list, having been thrown in with Real Betis and Marseille. He is great in the air and his ability to play behind a striker such as Totti would attract Roma. He was even thought to be a likely replacement for Ballack last summer, looks like that didn't turn out so hot. Has only scored 2 goals in 26 matches this year, but that may have more to do with the squad around him(Podolski: 4 in 22). The kicker in this rumor is the price: a tad over 5 million euros. Roque is only 25 and his talent alone would seem to dictate a much higher pricetag (especially from a club who once valued Owen Hargreaves at an absurd 25 million pounds). Due to the price alone this has to make him a favorite of the Giallorossi, but something says he may be better off proving himself in a lower league such as Ligue 1 before jumping to another big club. Arrival probability: 4/10

Antonio Cassano (ST) Real Madrid - Deep breaths. Relax.....deep breaths. As long as Antonio is still plying his trade as a footballer, these rumors will persist. Suffice it to say, Antonio had a special bond with Roma and the Giallorossi faithful. It may not have always been bad or always good, but it was always special. Having said he would "walk all the way back to Rome," there is no question where his heart lies. Quite frankly, Antonio is a big kid who needs to be loved. He needs to be the big fish in a small pond. He needs to be the man upon which everything rides. He may go back home to Bari, he may latch onto a newly promoted team looking for an identity(Napoli) or he may join a Milanese squad or Juve. However this turns out, he needs a couple years to prove he is a changed man before Roma welcomes him back. Time is on his side; only 24, much is left to be decided. Arrival probability: 3/10

* - I would not survive the Antonio Cassano we have seen at Real Madrid back in Rome. I pray this does not happen for quite some time, but damnit, get your act together Antonio and get your ass back here. There is not a player I want in Rome more than the kid who just went out and played football for the love of it.

David Suazo (ST) Cagliari - If he makes it to Rome next season, David Suazo will be on the short list of the best strikers in Europe by the end of the campaign. He is that good. Arrival probability: 8/10

Johan Elmander (CF) Toulouse - Tall Swedish forward who has come into his own after years of being dubbed a major prospect. Spent the majority of his younger years switching between an attacking midfield position and striker so he could provide much desired versatility in Spalletti's system. His style would allow him to play in a similar position as fellow Swede Zlatan and Eidur Gudjohnsen, as more of a deep-lying forward playing behind Totti(Possibly a 3-2-3-1-1); and Barcelona rumors have been circulating since the winter months. Scorer of 11 goals, Toulouse want one million euros for each of his goals this year. Reports have also stated this hinges on the status of Mirko Vucinic. With Mirko at 3.5 million euros less, 2 years younger, and a track record of 19 Serie A goals at 21, it's going to be extremely difficult to sell Elmander as a better buy. Arrival probability: 3.5/10

* - Thanks to Inara for the heads up on this rumor. I may start referring to her as my head Ligue 1 scout.

Cristian Rigano (ST) Messina - Cristian finished the season third in Serie A in goals scored due to a couple at the hands of Roma on the last matchday of the season. Undoubtedly he brought his top form to impress the Giallorossi bosses, but it will be a difficult sell. Despite his 19 goals, he will be 35 next season and that is really toeing the line with Father Time. A stop-gap backup role could be feasible if Okaka Chuka goes out on loan, but Roma have taken to looking for big fish this summer. Cristian just isn't a big fish. Arrival probability: 3/10

* - After I mentioned the possibility of a conspiracy theory due to Rigano's blatant penalty against Totti (#11) when he need one for the Euro Golden Boot lead, I've seen a few other sources speculate the same thing. Who knows how the Giallorossi hierarchy saw that, but it may very well be a factor.

Alvaro Recoba (BW) Inter - Roma should just pay him to stay away from the Giallorossi shirt a la Samuel Kuffour. Has recently stated it would be nearly impossible for him to play against Inter with another Italian team. Thank God. Arrival probability: 0.5/10

* - If you don’t know how I feel about Alvaro, then you missed this. And yes, that BW stands for benchwarmer.

Christian Vieri (FW) Atalanta - This, without question, is the best transfer that could happen to the AS Roma wing of the offside. Should this happen, a new theme will surely arise on a weekly basis: Christian Vieri’s WAG of the Week. Now, Vieri has called out Roma as his club choice du jour (see: Sampdoria), which means very little. But, playing along with Christian, this one actually seems probable for a few reasons:
#1: It would be a free transfer, exactly what Roma are looking for. If there is any chance of him playing for the same contractual agreement that he has at Atalanta(1500 euros a month, 100,000 euros for each goal scored), then Roma would jump at the chance.
#2: Have you seen that goal? It doesn’t even appear that he looked towards the general vicinity of the goal. Phenomenal.
#3: He’s Christian Vieri AKA form is temporary, class is permanent. The man simply knows how to score goals and, even at 33, hasn't lost his touch. At Inter from 99-05 before injuries: 142 games, 102 goals. Speaks for itself.
#4: Roma is one of the few teams Italy that Christian hasn’t played for yet, which it seems is his aim. Take a breath, and....Torino, Pisa Calcio, Ravenna Calcio, Venezia, Atalanta, Juventus, Lazio, Internazionale, AC Milan, and Atalanta #2. As well as Atletico Madrid and Monaco, and he sort of signed with Sampdoria for a couple weeks. Kinda.
#5: Seriously, have you seen that goal?
Arrival probability: 5.5/10

* - From this point on, assume anyone in Serie A or France whose contract runs out this summer will be linked to Roma. It's inevitable.

Antonio Di Natale (FW) Udinese - Udinese have very little chance of competing on the European front, which makes a Roman move for Di Natale very appealing. A major determining factor will be the pricetag: Udinese want 10 million euros. Seems impractical when they have only upwards of 20 million to spend after buying out Vucinic and Pizarro. He has 28 goals with Udinese in the past three years and 18 in 2 years with Empoli before that, which means Antonio is going to give you on average 9 goals a term. Decent, but not 10 million euros decent. Media outlets have claimed he is "very close to signing with Roma." Raise your hand if you haven’t heard that one before. Thought so. Rumors may persist, but this one seems unlikely unless the price drops. Arrival probability: 3.5/10

* - If they throw 10 million euros at this shithead then somebody HAS to buy out the Sensi family. I’d rather sign Recoba. Chew on that one for a minute.

Vincenzo Iaquinta (ST) Udinese - The Udinese forward more likely to be seen in the Giallorossi shirt next year. The rumors seem to stem from Luciano Spalletti saying something along the lines of, I want Vincenzo Iaquinta. That works. A classic striker, Vincenzo would undoubtedly help to bulge the old onion bag and should line up very well with Totti. A much more desirable return than Di Natale, Udinese are looking for another 10 million euros. He has fallen out with Udinese due to wages, shocking for a footballer, and it does appear his time in Udine is coming to a close. Juventus have also thrown their hat in the ring, and reports have speculated an agreement may already be in place. Raise your hand if you've never heard that one before. Roma should easily be into the race due to the allure of Champions League football and his previous relationship with Spalletti. Arrival probability: 5.5/10

* - Should Roma sign Suazo the probability drops to absolute zero. Just to make things absolutely clear, if Roma spends ten million euros on Di Natale instead of Iaquinta then I will turn into Michael Douglas in Falling Down. It won't be pretty.

Fabio Quagliarelli (FW) Sampdoria - Though he has been on spectacular form this year, Fabio hasn’t proven himself for the long haul. With Sampdoria demanding a minimum of 16 million euros, file this one under slim to none. Arrival probability: 1.5/10

Philippe Mexes and Roma have supposedly struck a contract agreement until 2011, earning 2.5 million euros plus major incentives. The official announcement will be made at some point next week (guess Mexes is on vaca). I guess Tuttosport was right, he really does want out of Rome.....