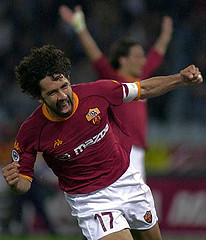 It's surprising that Roma have not been linked with more midfielders this summer, whereas they've been linked with every striker in and around Italy. Midfield is the area that could use the most improvement this summer, especially regarding the left side. The two "holding" midfielder (Spalletti calls it a 4-2-3-1 but it's more like a 4-5-1 with all the midfielders creating a clusterfuck in the opponent's box) spots will be filled with De Rossi, Aquilani, Faty and likely Pizarro. The first three are extremely young and talented and should be allowed room to grow, likely eliminating holding midfielders from the summer mix (Mathieu is an exception, he can also play along the back four). On the wing, Mancini has his spectacular moments (see: Lyon) but is far too inconsistent and needs a wing partner who makes darting runs with purpose. That was directed straight at you, Wilhelmsson; I have never seen a player so gifted who doesn't have a fucking clue how to actually play the game. Ideally, Mancini could switch back to the right if another left-footed winger came into the mix (Rosina?). Perrotta's job playing behind Totti is safe.

In summation: Please, could we please get someone for the left side. Pretty please?

Mathieu Bodmer (CM) Lille - The French version of Daniele De Rossi or Steven Gerrard. Tall, action-packed midfielder who likes to get involved in the attack and can hold his own in defense. He has played towards the front at Lille due to a paucity of goals from the strikers, but at a bigger club would be well served playing as a trequartista, playing behind the lone striker in between two wings. A technically gifted two-footed player, one of his main assets are his booming long rang shots with either foot. Il Romanista has reported a 10 million euro deal has been discussed with Lille but not much else, though they implied both sides saw it as a reasonable offer. Very good news, Bodmer is worth that and so much more. A lineup featuring De Rossi and Bodmer either side-by-side or behind one another would wreak absolute havoc on Serie A for years. Outside of David Suazo, probably the one person who could single-handedly push Roma towards the Scudetto next year. Pray for this one. Arrival probability: 4.5/10

Alessandro Rosina (AM) Torino - Rosinaldo has taken Serie A by storm this year. His pace, footwork and technical brilliance have him headlining the wish lists of most of the big guns. A gifted left-footer, those who have watched Torino this year will tell you his position: everywhere. Roma have made their attempts to get Rosina a major priority. They've offered 9 millions euros, the rest of Gianluca Comotto's contract (on loan at Torino, Roma's 50% ownership valued at roughly 1 million) and a free one year loan of Gianluca Curci. Only the offer has been reported and it's difficult to gauge Torino's feelings on the offer. One would likely think Rosina is worth upwards of 15 million euros, if not more. It's hard to argue with Roma going after a left footed attacking mid, the exact position they need so badly, and they will probably open up the checkbooks a little wider than they originally deemed prudent. The problem is Roma will find itself hard-pressed to outspend the big boys who are all waiting in line for Rosinaldo. Arrival probability: 7.5/10

* - Also, his hairline reminds of another certain attacking mid who used to ply his trade in the northwest corner of Italy. I'm not sayin, I'm just sayin....

Franco Semioli (RW) Chievo - Last summer, Franco was one of the hottest properties in Italy. He nearly made the Azzurri squad for Germany and was heavily rumored to be on his way to Arsenal. The move never materialized, and Franco gave hints as to why, "Roma are my first choice for the way they play and the importance of the club." In other words: Roma, please come and get me. With Chievo's relegation, it becomes highly probable Franco will depart this summer. Semioli is the likely back-up plan to Rosina, hopefully he'll be around long enough if Roma miss out on their first choice. Arrival probability: 5.5/10

Update: Read that last sentence again. Got it? Semioli just signed with Fiorentina, about 48 hours after Chievo were relegated. So apparently he isn't going to be coming to Rome. I didn't expect that at all. I can't blame him for joining the Viola, great team.

David Di Michele (LW/FW) Palermo - David has recently stated that he is happy in Sicily, but that he didn't know if he could turn down a move to his birth-city, Rome. He also stated he could play on the left-wing as he did at Udinese. This is just an open statement from a player without a word from the club, but Roma have had interest in the past. Di Michele would be a very good fit in Spalletti's system and likely has a few years of top-level football left. Until more information is known it's hard to gauge the interest, but David could be one of those transfers that comes to fruition with little warning. Departure probability: 3.5/10

Damiano Tommasi (DM) Levante - Alright, I made this one up, but I'm allowed to dream, right? For those who are new to AS Roma, Tommasi is a Roman icon who left the club last summer after ten years. His claim to fame is being a player who wasn't supremely talented, but had a supreme will, and turned himself into an elite midfielder. His works with numerous charities are similar to many other players, but I dare you to find a story like this:

"This is very important because the kids see us as idols and we have to give a good example. Often football players are described as egoistic and vague, but this isn’t true and we are often involved in charity events. I try to do what I can, remembering that I am very lucky. I do a job that I love and I get a lot of money for doing it. This is a joy but also a big responsibility", he once said during a conference at the University to which he was invited to talk to the young people. Tommasi spent almost the entire season in the infirmary the last year Capello coached the Rome team but Tommasi’s fate was even worse at the beginning of the next season. On July 22nd 2004, during the second pre-season match under coach Prandelli, a Stoke City player committed a bad foul on him and his knee "exploded". The season ended before it began and his possibilities of recovery were dubious for many months. At the end of the season, Tommasi’s contract with Rome expires and the team wants to be sure that he has completely recovered before signing him up. The player also has some doubts on his career because he is not too sure that at age 31 he can be a part of the future program set up by coach Spalletti and the Rome Club. The two parties meet a couple of times, but the gossip around is that there will be a divorce. But then there is a surprise ending; Damiano Tommasi demonstrates on the pitch and through medical tests that he is physically fit; Rome offers him a new contract but he doesn’t want to become a part of the team at such high prices following months of inactivity, so he asks for the minimum union wage which is €1,500.00 a month and becomes both the new exception and the new example of Italian football.

If anyone deserves to see out his career in Rome, it's Damiano. I truly hope he rides off into the sunset a Giallorossi.

Enzo Maresca (CM) Sevilla - Maresca is another in the list of players who have mentioned Roma, but not necessarily the other way around. Though he's said he's happy now, after his contract is up, or if things were to falter, his first choice would be to come to the capital. With Sevilla landing a CL spot, and still in competition for the title, it's unlikely they will let him go. Still, he is another attack-minded mid who would fit well in Spalletti's system. He has a good goal record for a midfielder and likes to spend the majority of time hanging out with the opposition's defense. He was bough from Juventus for 2.5 million euros in 2005 and has increased his value quite a bit since. It's unlikely Enzo will return this year, but when he does Roma will come calling. Arrival probability: 1.5/10

Pascal Feindouno (LW) Saint-Etienne - Some guy who plays for some French team. Il Romanista says Roma "put in an inquiry." 91 games, 24 goals. Not bad from the wing. Arrival probability: No clue. Not even sure if I care.

* - The most positive thing that came out of my research for Pascal was his website - I was able to roughly translate all the French. I'm stoked, I haven't tried reading French for about 10 years. Why is it that every time I see Russian I feel like I just had a seizure even though I took it in college?

Mozart (DM) Spartak Moscow - No, not Wolfgang. Former Reggina midfielder who has spent the last two years hanging out near the Kremlin. This Mozart can probably pass much better than Wolfgang. Actually, he can probably pass much better than most of the midfielders in Europe. Mozart has stated Roma and Fiorentina are interested and has been told he will be able to return to Serie A (or La Liga). Holding midfielders able to spray passes from deep are greatly appreciated in Italy and would do well creating the counter attack for Roma. Seems like a perfect player for Fiorentina though, and Celtic have also been rumored to be in the hunt. Really not needed in Rome. Arrival probability: 1.5/10

Cristiano Doni (MF) Atalanta - Midfielder who scores beaucoup goals, but only when he plays for Atalanta. Has moved to many other clubs but cannot reclaim the same form. Currently in his second stint with Atalanta, he may have been a good option - five years ago. At 34, it's no time for Roma to be gambling. Arrival probability: 2.5/10

Jeremy Mathieu (DM/DF) Toulouse - A persistent rumor for some time, the tall Frenchman is one of Spalletti’s more coveted targets. As a player who could provide cover for six positions, it’s hard to argue that he is an unnecessary purchase. Versatility like that is a valued commodity to any squad who compete on multiple fronts. Reports had him valued between 3.5 and 5.8 million euros; suprisingly, Roma liked the former and Toulouse the latter. Who knew? With the sides having spoken for over a year now, it's likely an agreement will be reached this summer somewhere in the middle. Arrival probability: 7.5/10