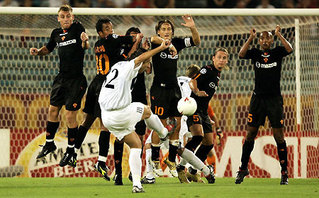 The future at RB is a priority (and it's not Gilberto Martinez), Panucci is getting on in years, and though Cassetti has played well, he is not the long-term answer. Juan should push Chivu out to the left and Ferrari is a solid third defender. If he finally comes, Mathieu (listed in the midfielder section) could provide versatility and would fill the last need for the back line. The suspects:

Juan (CB) Bayern Leverkusen - Brazilian newspapers, as well as some dude named Rudi Voller, have been reporting for a few months that Juan is on his way to the better half of the Olimpico. This would likely mean a switch in the back four, pushing Chivu out into a left back position and pushing Tonetto onto the left-wing. While a central defender does not seem the most pressing need for the summer, a back line of Panucci/Cassetti-Mexes-Juan-Chivu would certainly be one of the best in Serie A. Judging by the overwhelming rumors, as well as Juan supposedly confirming it in Brazil and various websites simply referring to him as a Giallorossi player, there can be no criticism for strengthening the defense. Arrival probability: 9.5/10

Walter Samuel (CB) Inter - The Wall, as he was known in his 4 years in Rome, was one of the best defenders in the world while he wore the Giallorossi colors. After being moved to Real Madrid for 25 million euros and then Inter, he has been a shell of his former self and has fallen behind Materazzi on the depth chart. It's likely he will be moved this summer, and expect every rumor involving Inter and a Roma player to include either he and/or Grosso as players. Light rumors have circulated that there is interest from at least one of the parties, most likely Samuel. If Roma somehow fails to get Juan, expect this rumor to vault to the forefront. Arrival probability: 2.5/10

Jacques Faty (CB/DM) Rennes - Had been tipped to join younger brother Ricardo in the Roma ranks but recently signed with Marseille. Off the market.

Dario Dainelli (DF) Fiorentina - Dario has been linked with Roma for a couple months, as his contract will run out this summer and the Viola have resigned themselves to losing him. Dainelli is a solid player with some versatility enabling him to split out to the right. Still, he's a lot further down the list than Juan or Mathieu. More likely to move to Juve or Milan. Arrival probability: 3/10

* - From here on out, assume anyone in Serie A or France whose contract runs out this summer will be linked to Roma.

Anthony Réveillère (RB) Lyon - Just so Mancini can practice his stepovers in training.

I'm sorry, that was mean.

Fabio Grosso(LB) Inter - The World Cup hero’s agent has implied that Fabio is interested in playing for Roma. Bring him on. Seems like the perfect wingback for Spalletti’s system. In other words, a defender who likes to spend time in the opposition’s box. However, Moratti is try to make the roster Argenti....er, Italian so it looks unlikely at least for a couple years. Expect a Panucci; spending the twilight in Rome. Arrival probability: 4/10

Paolo Cannavaro (CB) Napoli - Most people don't know there's another Canna, and that he's actually pretty good. I do have a confession to make, I made this one up. But couldn't Roma put in a bid in a shameless attempt to lure the elder Canna to the Olimpico? Fabio has said that he wants to return to Napoli eventually and/or play with his brother again. Roma should make the latter dream happen. There's nothing like people helping people. Arrival probability: 1/10

Cicinho (RB) Real Madrid - Roma and Cicinho have been thisclose thismany times to a transfer for the marauding right-back. A player who could flourish under Spalletti as a defender who likes to think he is a striker, Cicinho is the ideal long-term replacement for Panucci. He is also BFF with Doni and was hotly rumored to be joining Roma this January but it seemingly fell through after his knee went through a proverbial meat grinder. Judging by his injury this season as well as lack of playing time afterwards, the price should be very fair and low by his talent standards. Compared with some guy named Cafu who Roma fans have probably never heard of, Cicinho is one of the three most likely transfers of the summer. Arrival probability: 8/10

* - When he was in Brazil, Daniel Alves was being touted as his future back-up. Alves may have a fiery temperament, amazing stamina and huge competitive streak, but Cicinho is the one teeming with talent. The Sevilla-man is the topic du jour, but Cicinho is capable of leaving him in the dust. If you watch him play you assume he's an attacking mid in the mold of a Kaka, and then he hauls ass back to the defense. Phenomenal player. Sign him at all costs, Luciano.