Summer Fantasies. No, Not Those.

Share All sharing options for: Summer Fantasies. No, Not Those. 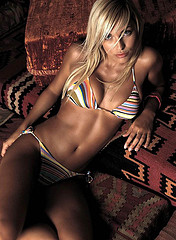 First, let me send out my deepest gratitude to the fronts offices of Portsmouth and Juventus (hell froze over last night if you hadn't noticed). Due to the impending deal of Muntari to Pompey and the possibility of Iaquinta switching one set of zebra stripes for another, the likelihood of Antonio Di Natale leaving Udine this summer is slim according to club officials. No Rome for Antonio! I feel like throwing on Queen's "We Are The Champions" and pouring bubbly all over my self.

Pompey and Juve have fruitbaskets forthcoming.

Now that I've listed a good amount of the players who have been linked with Roma or will most likely be linked with them, I get to list who I want. These are the players who would benefit Roma the most this summer and are actually either a) reasonable or b) already linked (in other words, not Buffon, Nesta, Gerrard, Kaka, Tevez and Eto'o). If Roma picked up two I'd be ecstatic. They'll most likely get none.

1. David Suazo (ST) Cagliari - I’ve made no shortage of my desire for the Honduran to ply his trade in Rome. He is a fantastic player, almost singlehandedly sustaining Cagliari for the past few years. David wants to play in Rome and hasn't exactly been subtle about it. He's gifted enough to single handedly change the way teams play against Roma. That's very difficult to acquire. If Suazo does land in the eternal city, and there is a chance that he will, expect 15 goals to be the minimum expectation (new system), with a likely achievable goal of 25 and the Capocannoniere. With all parties involved wanting this to happen, including Cagliari, expect all efforts to be exhausted. It reminds me of another guy that Roma tried to sign who could supposedly take them over the top. I think his name was Gabriel Batistuta.....

* - In a possibly related note Edgar Alvarez will return to Rome and will likely stay, though Udinese and CSKA Moscow are very interested. This guy is fast, real fast; let's hope he can convince Roma to take on compatriot David Suazo. Also, this likely signals the end of The Christian Wilhemsson Experience. Today is an early Christmas for me. Fruitbaskets all around!

2. Mathieu Bodmer (CM) Lille - As I've said before, he is a diamond. Most people haven't seen him outside of the Champions League, but he led Lille in scoring this year and was the overall engine of the team. He and De Rossi are so similar yet both so versatile they would coexist perfectly. Bodmer's passing vision would allow the waves of attack to fly upfield while he distributes the ball from just beyond the opposition's box. I've always envisioned, even though he played directly behind the striker at Lille, that he would be perfect to play a Xabi Alonso or Andrea Pirlo role, but from further up the field. At "only" a supposed 10 million euros (the same as Di Natale, don't get me started), he's a fantastic investment and nearly a can't miss player due to his incredible workrate. This is a one time chance for the Sensi family, if he goes to a bigger club, or any club as it's harder to get smaller than Lille, then he will certainly set the world alight and skyrocket his price.

So if you hadn't noticed, I think Roma should get this guy. He's kinda good. And I really really dislike the French, so that should say a lot. Just don't tell Philippe.

* - Also, maybe we can sneak him into Italy for 5 years to get citizenship and play for the Azzurri before Domenech gets a fucking clue and calls him up. I was astounded by this, France is a solid national team, but you cannot convince me there are a minimum of 10 midfielders from France better than Bodmer: Vieira, Nasri, Malouda, Ribery, ummmm...Toulalan?...ummmm....

** - Actually, let's try and cherrypick a few guys from Lille. Very talented young roster. Abdul Keita(already linked), Jean Makoun and Bodmer are studs right now. Ludovic Obraniak, Mathieu Debuchy and Kevin Mirallas supposedly have huge talent and could possibly be had on the cheap. But the one that impressed me most with his workrate and versatility during the CL this year was Mathieu Chalme. Huge engine, can play almost anywhere and has some pace to boot. I'd love to see him make a small money move to Rome.

3a. Samir Nasri (AM) Marseille - I’m going to assume people on a footballing website know about Monsieur Nasri. For those who don’t: Nasri is Zizou v. 2.0. Able to play on the wing or in the middle of the pitch and supremely gifted with the ball at his feet, he doesn’t have Zidane’s passing vision or overall command of the pitch, yet(Nor do I believe he will). He would be absolutely perfect to fly up and down the pitch of the Olimpico. Considering Marseille will be in the Champions League next year it's highly improbable he will move. If he did, Nasri would certainly cost a pretty penny, probably the full sum of the transfer budget and more, but he is a rare talent and would do extremely well under Spalletti. Well, pretty much anyone with some pace, stamina and above average footwork fits into Spalletti's system.

3b. Daniel Carvalho (AM) CSKA Moscow - An attacking midfielder in the mold of Nasri who tends to float between the middle of the pitch and the wings. From what I understand, he likes to play on the left quite a bit, but I can’t really confirm it because I decided to cancel my subscription to the Russian Premier League Channel. Wonderful vision, he has been dubbed an uber-prospect for a couple years now. Carvalho has Barcelona and Valencia, amongst others, drooling and probably won't be in Russia much longer. However, let's look at this lineage: A certain Roman Abramovich had controlling interest as founder of Sibneft(Russian oil company), which owned CSKA until 2005. Knowing Roman’s slightly hands on approach, he probably had a say in bringing Carvalho to Mockba. I would be willing to bet the house, as well as the exclusive rights to Zlatan’s humility, that Carvalho makes his way to London within the next few years.

* - CSKA Moscow is teeming with elite young talent, I wouldn’t mind if Roma just tried to poach their roster. Besides Carvalho, they also have:
Ramon - Another Brazilian attacking mid dubbed in his homeland the new Kaka. Rumored to be heading, where else, to the Rossoneri. Just what they need, two Kakas. What the fuck.
Caner Erkin - Turkish winger giving Nuri Sahin a run for the most promising Turk in some time. Also, very very ugly. Always a plus. Looks a bit like Stewie Griffin.
Jo - Physical Brazilian forward likened to that Adriano fellow. 18 games, 14 goals last year. Pure finisher.
Vagner Love - Yet another Brazilian playing upfront, he is one who has actually been linked with Chelsea. Has speed for days. He had Love tacked onto the back of his name for bringing a girl to his hotel room the night before a big tournament leg in Brazil. Simply awesome. You can’t make this stuff up.
Igor Akinfeyev - Saved the best for last. The Russian national team starter is a phenom, hands down the best keeper in the former Soviet Bloc and he’s all of 20. Currently out until late fall after shredding his knee, he is considered the future number one keeper in the world, if he isn’t already. Pundits claim he is already better than Gigi(Blasphemy! WC: 2 goals, 1 own goal, 1 penalty. Nuff said.). Shocking prediction of the summer: Juve sell Buffon to Berlusconi & Co. for 60 million euros or so, then use almost half to buy up Igor. The new Lev Yashin.

The Selecao are going to be holding home games in Moscow in about two years time.

5. Fabio Cannavaro (CB) Real Madrid - Seriously, who in the world would not want Canna on their team? Who? See above.

Forthcoming: The Predictions That Will Almost Definitely Not Come True.