Share All sharing options for: The Predictions (Cue Melodramatic Music) 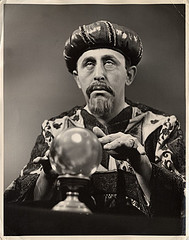 After all that here's how I think the summer will play out. If you still value my opinion enough to read this, I don't know what to tell you. I'm not really sure I value it much anymore.

In summation, how do I expect the summer to turn out? Very very creatively. The suspects:

Tavano - "Decidedly average." Love it. Your six month loan deal was worth that alone. But not much else.

Wilhelmsson - He's like dating a stripper. Flashy and has some sweet moves, but when you have to take her somewhere important - like the opera, ballet or to meet your family(or a CL game) - she's probably just going to end up embarrassing you. Not worth the trouble.

No, I do not speak from experience. I swear.

Matteo Brighi - Most likely a chip in a cash plus player deal. But seriously, a 97 in FIFA? Give him a chance Luciano.

Aleandro Rosi - He was rumored to be included in a Brighi, Rosi, cash for Muntari before Sully moved to England. A co-ownership deal could be worked out as part of a modified deal to get another player such as Rosina/Quagliarellia. I’ve always liked Rosi and hoped he could mature as a Giallorossi player; but if he needs to be part of the deal for one of those guys? Have a nice career, Aleandro.

Samuel Kuffour - I’m going to be kind to Samuel:

Get the fuck out.

There, much more reserved than I expected.

David Suazo or Alessandro Rosina - It's only going to be one, so I'm not going to cop out and say one or the other. I'll go with:

Suazo - I’m going to keep this simple. You know how I feel about him. I will do cartwheels the day he arrives. Probably starts out on the wing until Spalletti caves to a 3-2-3-2 or 4-4-1-1 with Suazo behind Totti.

Yes, this means you should bet the house on Rosina.

Antonio Chimenti - I really can't explain how delighted I genuinely am. I know he will only be Doni's backup but every single time I've seen him play he makes Gigi Buffon look like Tony Meola. Also, it's always nice to have a resident geriatric on the squad. If you put a picture of Chimenti and Spalletti side-by-side and asked 10 random people who they thought was older, I bet 8 would say Antonio. I'm actually gonna try this. Results forthcoming.

Cicinho - Hasn’t exactly set Spain alight in Madrid but he is young enough that he can reclaim the phenomenal form he showed back in Sao Paolo. The speedy right-back will be able to provide plenty of added life to the offense.

Someone Out of Nowhere - Likely a winger or attacking mid, the most important part being the price, meaning not much of one. I'm going to pull this one out of my ass: Juan Pablo Francia of Bordeaux. Hasn't been linked whatsoever with Roma. Was a big prospect but the coaches at Bordeaux don't play him anymore and he wants out, hasn't exactly been coy about it either. Should be relatively cheap. Has the prerequisites for Spalletti: Pace, footwork and an attacking mindset. Why not?

If this comes true I'm quitting the offside, selling my possessions and moving to Tibet to live a monastic existence until my death. I'm going out on top.

Juan - Selecao starter really says enough for me, although an attacking mid or forward from the Brazilian XI would be preferable. Versatile enough that he could switch in and out of the left back position with Chivu, the Roman defense is looking stellar for next year.

Quick note: Juan's agent has said Roma have not inquired about the Brazilian. Really? Because Juan has stated to Brazilian papers he has essentially agreed with Roma and Rudi Voller, current Bayer Leverkusen Sporting Director and former AS Roma legend, has stated he is on his way to the capital. I'm confused. Shameless attempt by the agent to get another team into the bidding to drive the price up? Or is everyone not on the same page? Maybe Juan's just making stuff up and telling Rudi. Let's enjoy this soap opera.

Complete BS Prediction of the Summer:

Chivu to Real Madrid in return for 6(?) million euros plus full ownership of one Fabio Cannavaro. I've got to admit, after the season Canna had, I have no clue what his pricetag is, but Chivu has seven years on him so that has to be worth quite a bit. Canna plus Emerson to Madrid was a rumored 20 mill last year and Chivu is worth at least the 21 mill Roma invested when they bought him from Ajax. So....I don't know. As far as Canna goes, every single team in Italy (except Lazio, unfortunately Inter has already enjoyed his services) should be allowed the privilege of having him play for them once. How can you not love him?

Considering my placement of scantily clad women in a few recent posts, this one's for the ladies.