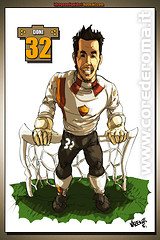 I've come to terms with it, and I'm somewhat OK with it. I'm pretty sure I've never read a People magazine, though I may have flipped through one in a doctor's office while waiting to cough. But I have a decent idea what they're about, and I think that's what I'd equate myself to. I publish some news, some feel good stories, some complete gossip, all without the slightest bit of shame. I'm also about one more Cristiano Doni rumor from printing a headline story about Britney's post-partum depression and how it's affecting the size of her ass. My parents are so proud.

It looks like the Roman media had a premature infatuation with a possible Ahmed Barusso signing, though there is still a very good chance he comes to Rome. Rimini's director claims there is still no finalization of a deal with Roma, though he expects a deal with Roma or another club to be done within 3-4 days and puts Roma's chances at around 60% right now. But Ahmed is very interested in playing in Rome and he implied it is his first choice right now. Considering Roma's huge interest it looks likely it will be be happening shortly. I'm still not sure if he'll be making his debut at the Olimpico or the Colosseum. The man is a beast.

I) I know Christian Chivu supposedly would like to resign and the majority of Giallorossi fans mirror his sentiments. I won't argue it, as it would be in the best interest of the club which makes me all in favor, but there is one major worry for me. One of the major concessions in the Mexes contract negotiations was a fair buy-out clause, so that if things went real sour real quick, a team could come in and realistically buy out Phillipe's contract for 16m euros. In two years I feel like that will be an absolute bargain but that is neither here nor their. My worry is that if Christian signs a contract extension, Roma will do the same for him and it will backfire on them in a couple years. Chivu is valued highly by most of Europe and has reportedly already sparked a bidding war between the two biggest clubs in Spain. If he had a buy-out clause this wouldn't be happening. Christian would sign with whichever club he preferred and Roma would get a set amount, and likely lose out on millions which they can't afford to throw out the door. I'm not saying this will happen, but it does worry me because I think that Christian is out of town in a few years time regardless of a contract extension. I just don't see him as a Roma lifer, and I don't know many people who do.

* - There is a new name being floated about in the Chivu rumors, Eidur Gudjohnsen. Despite his former Chelseaness, I have always been a fan, but I'm not sure he fits into the system or has any interest in coming to Rome. Probably hot air from the media.

II) Gianluca Curci had to be substituted in the 23rd minute of yesterday's game versus Serbia due to a groin problem. Little is known about the injury and whether or not he'll be able to suit up for the remainder of the tournament is unclear. Luckily, outside of a tear, groin problems can typically be rehabilitated with plenty of rest and minor physiotherapy. It's unfortunate but for Roma it couldn't have happened at a better time. For the Azzurrini, the netminder is the least of their problems, but Emiliano Viviano is an outstanding backup and should do well. Only a handful of keepers in the world, if any, could've stopped that goal today. How the hell they couldn't score with that lineup is a whole other question.

I am really hoping they release the injury to the media as a "fatigued groin." For our international brethren, Roger Clemens (NY Yankees pitcher for those completely out of the loop), was sidelined last week with an injury classified as a "fatigued right groin." How one achieves that, I really don't know - though I do have my guesses (and yes, it does involve a transsexual rodeo clown). But can you even imagine the line of guys between the ages of 18-55 looking to sign up for that medical experimentation?

III) According to il Romanista there is optimism in Rome that they can land either Fabio Quagliarella or Alessandro Rosina, but not for at least a week or so. Fab Quag's would likely come at around 20m euros, though Roma hopes the price will drop and Rosinaldo would come at 10m. Both would include at least a free loan or co-ownership of Mirko, which I am reluctantly beginning to agree with. If Roma played a 4-4-2 then I would kidnap Mirko and hold him ransom until Roma agreed not to move him, but the fact remains that Mirko is not a winger. As long as Totti is around then Mirko will either be on the bench or out of position, both of which would stunt his growth. So loaning him out is the least of the evils and would probably benefit him. With Sampdoria's recent interest in l'Aeroplano, the deal could also send Vincenzo Montella back home.

As for Rosinaldo, I would much prefer him due to the price (absurdly low for his talent) and I believe he is going to be one of the most creative midfielders in Serie A for years to come (imagine his assist totals with Totti up front). Fab Quag's is a stellar talent but he is not twice as valuable as Alessandro. Fab scored 13 from a front-line position while Rosinaldo scored 9 from the midfield, and both tallies were largely filled with spectacular goals. Roma could undoubtedly put that remaining 10m to good use. It's not cheap for Philippe's hair to look that damn good, ya know? They also have Commoto's half ownership and Curci to work with, along with Vucinic. So the actual cash value should vary drastically for Rosina, as well as with Fab Quag's. We should know more in week or so but this is very promising.

IV) Also in il Romanista (one of the sexier and deepest editions in awhile), Doni says that Juan is similar to Kaka (!) and that Cicinho is desperate to come to Rome but Real won't let him go right now. Now that's what you would call a Chivu negotiation chip. Not much Roma can do until Chivugate is resolved. Either way, I fully expect Cicinho to wind up at Roma at some point this summer.

Does anyone else think comparing Juan to Kaka is enough probable cause for the FIGC to give Doni a pee test? Can we take up a collection for a Whizzinator ?

V) The Julien Faubert rumors have completely disappeared into oblivion. After the representatives were in Rome, confirmed talks and a rumor contract agreement, all news has died regarding the Frenchman. It's becoming fairly clear Faubert is third on the Giallorossi wishlist and will have to wait until the Sampdoria and Torino hierarchy weigh in on the situation. I'm pretty concerned he won't be there if both fall through though; Fiorentina seem quite enamored with poaching a Frenchman this summer and he is one of their top targets.

If Sampodoria and Udinese remain insistent upon Fab Quag's 20m pricetag, expect talks with Faubert and Bordeaux to heat back up, because I'm not sure Rosina is looking to leave just yet. I can't blame him, a lot of people are hoping for a return of Grande Torino. He could do something special up there, provided Torino becomes slightly less ancient. I, for one, would love to see it, but I'm a homer (mom's family is from 20km outside the city - Torino was in Serie B when I was younger and I latched on to Roma).

VI) I have a gut feeling David Suazo isn't heading to Inter. Cagliari have asked for relative peanuts from the Nerazzurri and Moratti won't even cough that up - scumbag that he is. Suazo has been hugely faithful to the Sardinian outfit over the years, and vice-versa, and his sale means so much to the club financially that I can't believe he would be able to make Cagliari accept a less-than-fair offer for him. Roma can afford to pay him a similar salary, could he be the reason for the relative quiet on the Giallorossi transfer front over the last 5 or so days?

VII) No news on the loans of Christian Wilhelmsson or Rodrigo Defendi. I can't imagine they would keep Defendi but they're keeping Gilberto Martinez around another year, so what the hell do I know.

And if Wilhelmsson stays I'm going to fight him to the death. If you didn't already know.

Likely Departures:
Montella - All but assured. Probably back to Sampdoria.
Vucinic - Unfortunately, some part of a deal for a true winger.
Curci - Loan.

Who The Fuck Knows:
Christian Chivu - No clue. I'd put it at 75/25 he leaves.
Christian Wilhelmsson - Please please please. Pretty please.
David Pizarro - Roma had to want to leave him on co-ownership and I'm thinking David dug his own grave with his "buy me or sell me" ultimatum.
David Suazo - Inter seem to be royally screwing this one up. We know how close he has been to Rome in the past. Plan B in motion?

If Roma acquired Juan, Cicinho, Marica, Barusso, Corini and Faubert, the summer would be considered an unequivocal success. Quagliarella or Rosina would be icing on the cake. Suazo I don't even need to mention. It probably won't work out this way, but I can dream. Right?