Share All sharing options for: Roma Adding A Gladiator 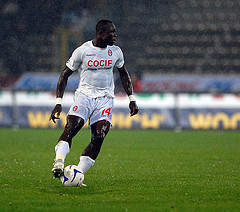 Finally, a contract being signed not involving someone in the Swiss Second Divison. Ahmed Barusso, finally passed his medicals and will become Roma property. Most medicals are simply a formality; however, Barusso's was not. He broke his leg in spectacular fashion last October and spent the rest of the season recovering. In fact, a deal was in place to send him to Milan but fell through after the injury. He's been courted by Inter as well as their better half, Fiorentina and Arsenal, and is widely seen as the second coming of Michael Essien. Now, I really do not like Chelsea or their mercenaries but, outside of those corporate tossers who jumped on the bandwagon and a few Londoners who sat through years of mediocrity, who really does? But to me, Michael Essien is one of the best and most invaluable players in the world, and worth every penny of the ransom Chelsea paid for him a couple years ago. If Ahmed Barusso is half of what Essien is, then Roma have hit the absolute jackpot.

Rumor is the price is 2m euros for co-ownership. Co-ownership is typically a questionable move (see: David Pizarro, Fabio Quagliarella for 'Doria), but it may be justified in this case, because Barusso still has yet to play a game since that leg break, and the medicals took two days to complete. Of course, this also could be a cover-up for the cheap ways of Rosella Sensi. Hopefully there's an iron-clad clause allowing Roma to buy him out permanently for roughly the same 2m, because a promising year could see his value skyrocket. As a warning, don't be utterly shocked if he is loaned out next season. The midfield is starting to get very crowded, and the anticipated arrival of at least one winger and a veteran like Corini would make for a logjam in the middle. But this signing isn't for 2007, it's for 08-09 and beyond. Ahmed won't, and should not, begin next year in the starting XI, but it won't be long before he makes his way there.

There is little footage of him on the net, but what is on the net is absolutely spectacular. He is a hugely strong, fast and powerful defensive midfielder, who is widely known for his viscous tackles and take-no-prisoners mentality. He and De Rossi will form a devastating tandem in front of the back line, and will probably see more than their fair share of cards. His other main asset are the Howitzers he has for legs. The strikes he sends from deep are reminiscent of Essien and John Arne Riise. In other words, defenders think twice before risking serious injury in order to step in front of his kicks. He is quite adept at free-kicks as well, and may even replace Totti when the kicks are from 30+ meters eventually. 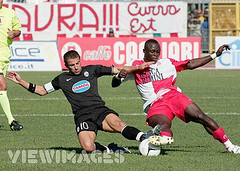 At worst he will be a good player and sold again in a few years for a substantial profit. At best, he is a game-changer and someone who can dominate the deep midfield area. Moreso, he is that guy who can snuff out counter-attacks from a defensive mid position that Roma so dearly need when De Rossi sets up shop in the penalty area. With Barusso now, Aquilani shining, Faty emerging and Brighi likely remaining in Rome, the present and future is in good shape for Roma (and not so wonderful for David Pizarro).

Also, I typically don't like to go to wikipedia for information but this blurb got me all excited in a completely PG way:

"The Ghanaian is a ball-winning defensive midfielder who comes equipped with a devilish shot from long distance. His powerful, physical and technical style of play has been compared to other Ghana-born players. In particular a more technical Desailly, a physical Muntari and a powerful Michael Essien."

Check out that last sentence. Stellar. That's some decent company. I feel like there's a joke somewhere in here involving a simile + drooling + Martha + Luis Figo , but I'm blanking. That's how excited I am about Barusso. I'm blanking on poorly crafted satirical similes. Damn.

And doesn't it feel great to beat out Inter and Milan to a signing? Some videos:

Long range missile set to the best soundtrack ever.

I don't care if he's playing in Serie C1, Serie A or the local rec league. This is disgusting.

Does the old guy in this clip come in the deal? I want him at the Olimpico every weekend. And I don't mean as a player, Rosella. Even though he would provide a younger alternative to current transfer targets Cristian Doni and Eugenio Corini.