Share All sharing options for: Ederson & The Weekend Update 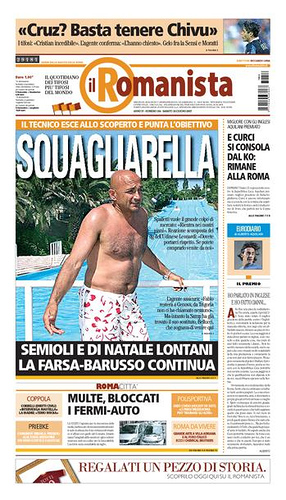 Let's start this off with the big pseudo-rumor of yesterday, the French-born rumor that Roma had come in at the last minute to poach Brazilian phenom Ederson from the waiting arms of Lazio. Now, for a lot of people this sounds unlikely - including myself. However, Roma does have a history of making controversial and last minute buys under the noses of other clubs, including Lazio. The majority has come in the youth set-up, including one major coup from the Lazio youth ranks in Fabrizio Grillo. They also signed Stefano Okaka Chuka after he had taken his official photo for the Rossoneri, in the Milan jersey. I'm sure the majority of Roma fans also remember the Philippe Mexes debacle. Whatever happened between he and Auxerre sounds more like a made-for-TV movie than an actual football transaction. For those who don't know, Mexes joined Roma without even discussing it with the French club and snuck out of Auxerre on a midnight train in a disguise and was picked up by Rosella Sensi at the train station and whisked back to Trigoria in the trunk of her car in the early morning fog, or something like that. Truthfully, they did "steal" him from Auxerre by signing a contract with Philippe without agreeing to a deal with the French club, and were subsequently banned from the transfer market for a year. Roma also poached him right in front of Gerard Houllier, Alex Ferguson, Jose Mourinho and Arsene Wenger - who were all starry-eyed and offering big EPL bank. Makes you love Philippe just a little bit more.

Then there was the Chivu situation with Ajax where they secured his services over the advances of Real Madrid et al and then told Ajax, "Ummm, about that 21m? Yeah, we're not gonna pay it right now. But thanks for Christian, and we'll give you a call when we get the money. No, really. We will." Then Ajax called up FIFA crying and it was a big mess. You get the idea. Roma aren't exactly tops on everyone's list of favorite club to work with. Though they're certainly much much higher than Jean-Michel Aulas. Speaking of Lucifer, Aulas was one of the men who supposedly lost out on the services of Ederson, who this is all about in case you forgot (sorry). Let's try and work this one out; and yes, I'm going to be desperately grabbing at straws and silver linings galore:

i) The above mentioned transfer strategy of Roma, allowing other clubs to do the scouting and then cherry-picking the talent from right in front of them. It's an art I tell you.

ii) Unfortunately, Lazio is the team that has been after Ederson for quite sometime, so it is all-together possible that it's a simple mistake from the media. But let's give the media some credit and assume this is highly unlikely, because Roma and Lazio are vastly different. Isn't it likely that Roma would want to do everything possible to keep the next Ronaldinho out of Lazio's hands? Especially since they can actually compete with Lazio financially, unlike if Juventus or Inter entered the fray (both have expressed interest in the past). We all know Rosella doesn't like Lotito (Lazio prez) and I would not put it past her to factor in her personal feelings in this situation.

iii) Roma's not-so-subtle bid to secede and join the Brazilian league next year. The Brazilian history at the club is rich (the only retired number is Aldair's #6) and Roma are only trying to add to the glory with Cicinho, Juan and anyone else in Europe without a surname. How could this not appeal to Ederson more than Lazio? He'd walk into a locker room with Mancini, Taddei, Doni and Aquilaninho already, and Juan and Cicinho possibly on the way. If Roma even came close to contacting Nice I'm sure he perked up and noticed.

iv) That bid by Manchester United for Fab Quag's may have scared Roma out of the hunt, knowing they can't compete with that type of bank. Ederson at 8-12m is a much better bargain, and he actually has more potential than Fab Quag's (you know I've come around on him, but Ederson is riiiiiiidiculous). They can get Ederson + Juan for Fab Quag's money. Anyone opposing this? Didn't think so. Moving on.

* - The goal from 40 yards out about 45 seconds into the above video is from his Ligue 1 debut when he was 18 years old. Gross. Also, a quality musical selection. Not necessarily fitting, but still much better than most internet videos (Zlatan videos aside, of course). 4/5 Stars. I'm going to start rating videos I link to - choose wisely. As a benchmark, the video from yesterday with the old guy from Rimini gets 5.5/5 stars. That old guy is just simply awesome. I'm not sure I'm kidding about taking a trip to Rimini just to find and hang out with him someday.

v) The buyout clause in his contract is 12m euros, and the Nice hierarchy have been pushing for him to sign an extension to increase that figure drastically. I'm sure an extension would bump it up to 18-20m. I said yesterday I though Aulas could get 22m for him, but I'm thinking that figure might be closer to 25m. I mean, if he can get 17m POUNDS for Flourent Malouda, then he can probably pull the Easter Bunny out of his ass while curing AIDS - which I don't doubt. So, getting back to Ederson, 12m euros is actually a bargain buy for a kid who is only 21 years old.

vi) The French wikipedia is listing him as an AS Roma player, and has since yesterday afternoon. I know it's wikipedia, but let a guy dream, alright? Seriously, we Roma fans don't exactly have much to hold onto during the summer.

viii) For those wondering why the next Ronaldinho is supposedly deciding between Roma and Lazio and not a G14 roll call, the other clubs who tried and supposedly failed to land his services are: Juventus, Lyon, Valencia, and at least one of the Milan clubs (believe it was Inter). All G14 members.

Or maybe I'm an idiot and it's all been blown out of proportion. My mind is way too over-analytical and it drives many people crazy, including myself, so I'm probably wrong. It should play out soon, but I doubt it was as simple as the reports made it out to be yesterday. But it's fun to dream, right?

(By the way, in terms of my over-the-top writing and analytical musings, you guys haven't seen anything yet. I wrote a fairly lengthy paper in stream of consciousness my senior year in high school. I was given an A and then asked to leave the class - true story. Just you wait.)

The Rest If You're Still Hanging Around:
I) I need Bobo Vieri at Roma. It's not even a question anymore. It absolutely has to happen. I'm launching a campaign to bring Bobo to Rome, I'll divulge more soon.

II) Alessio Cerci will return from his loan at Brescia after the Serie B squad declined to purchase him outright for roughly a quarter-million euros. Ouch. Somebody give this kid a hug.

In other related news, former Swiss-Division-Two-Superstar Adrian Pit (Pronounced 'Piz') actually spent some time on loan at Ascoli, but the newly-relegated club also declined to purchase him outright. Promising prospect right there. He's almost definitely going to spend next season on loan in Serie B. I'm still betting he doesn't see a single day in a Roma kit.

III) We're now officially referring to Alberto Aquilani as Aquilaninho. Everybody on board.

IV) Julio Cruz is not coming to Rome:
1. Wages. He makes something like double the salary cap.
2. Striker. No need for one especially since it looks like Mirko is staying.
3. Chivu. Everything from the Giallorossi camp says that they are doing everything possible to make sure Moratti bends over for Chivu. That, or maybe he just wants to bend over. Either way, it's promising. Losing Cruz in the Chivu deal would be more beneficial to Inter. He's 33, big wages, and they'll likely dump a striker anyway. Rosella isn't going to allow that to happen (fingers crossed everybody).

V) I feel the need to let you in on a little phone conversation I had the other day:

Martin Jol: "Eh, transfer market's stressing me out. We signed that Gareth Bale kid, but I'm a little worried about the expectations, he's only 18 and they're going to crucify him if we don't join the Big 4. The kid's gonna be a super-stud but not for a couple years of so."

C: "Maybe you need a team scapegoat. Like someone who has high expectations but perpetually fails to meet them. Someone with a lot of talent but you know will inevitably fall flat on his face."

MJ: "I think you're right, it could help save my ass this year, too. I like the core of our team now, so I'd need to bring someone in. Like someone who really really blows. Who, though?"

C: "I think I know just the guy. That Christian Wilhelmsson guy from Nantes who spent the spring on loan at Roma. You could probably get him for about 2 million pounds too."

MJ: "Wilhelmsson? You mean the guy with the fancy ball skills who typically loses the ball and forgets about the other 9 players on the field with him? Doesn't he have a abnormally small footballing brain too?"

MJ: "I think he's murdering abandoned babies or something somewhere. What a scumbag. Hey, wanna meet me in Amsterdam during the January transfer window and we can, uh, discuss, uh, the current, uh, state of the, uh, team?"

And all is right with the world today.