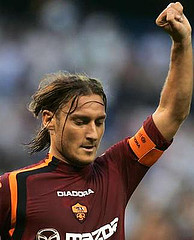 King of Europe Will Be Crowned Today:

The news today resides in Madrid, where Ruud van Nistelrooy makes an attempt on the league and Europe, as he is within one goal of tying Francesco Totti for the European Golden Boot and two to win it outright. With an absurd 10 goals in the last 7 fixtures (scoring at least one in all 7), it's hard to imagine he won't at least tie Totti so let's pray for an early red. No matter what happens it has been a spectacular season for Totti, who has come back after a badly broken ankle to become Serie A's leading goal scorer, at the least. As leader of goals and assists in Italia he has to be short listed for the Ballon D'Or, and I'm not convinced he shouldn't win (32g & 12a to Kaka's 18 & 9 on a stacked team in all competitions - I'm just sayin).

I) Barcelona are rumored to be offering Juliano Belletti, Sylvinho and 18m euros for Christian Chivu. I'm all for Chivu staying in Rome but that's a very very solid offer from Barcelona, especially since I doubt all of their focus is on the transfer market right now. I'd prefer Sylvinho plus Edmilson or Thiago Motta but it's something to work with. Belletti has never impressed me and I've always felt he was the weak link on their team when he started. Roma already has some quality over-30 right backs, no need for another. Sylvinho is a quality left-back, but he's 33 years old - not exactly entering his prime. The major deciding point of the two will likely be their salaries, as I can imagine just being listed on the Barcelona roster is handsomely rewarded. Oh, and there's that 18m euros part. Which would cover Juan and most of Alessandro Rosina or Ederson, or at least half of Fabio Quagliarella. Things could be worse. Isn't it nice to be working with a class organization? Inter could learn a few things about player valuation from Barca (I have a feeling some people in Lyon might have a thing or two to say about that).

While we're dreaming, a 38m euro transfer budget would cover Ederson/Rosina (10-12m), Barusso (2m), Juan (8m), Pizarro's half (6m) and the remainder of Vucinic (7.5m) with a little to spare (those are just examples). That's before the sales of Montella, Nonda, Kuffour, etc and anyone on a free contract. Like I said, it could be worse.

I'm still predicting a Cicinho + beaucoup bank deal for Chivu. I can't imagine Roma would be chomping at the bit to take on a couple of defenders on the down-slide with sizable salaries - even though the Barca offer was a pretty decent offer. Essentially they want cash; because, while you're eliminating Chivu's contract, you also have to subtract any players' contracts coming in return from the total return value of the deal. So unless it's a player they covet like Cicinho, Pizarro's half or even Edmilson - it's highly unlikely they'll take on unnecessary contracts unless they're paid for by the other team.

"You can say that you like a footballer, it is different when you admit that you are interested in signing him. These things should be considered carefully. He has reached an important level and is ready to leave, but we want to cash in on his departure and there is no buyer at the time being."

"They need to respect our players."

Hey Pietro, newsflash: HE DOESN'T PLAY FOR YOU. You own half his contract, because you decided to dump him when you thought he wouldn't turn out to be of "Udinese quality." You hit the fucking lottery with Fab Quag's, now shut your mouth, take your money and leave Roma alone.

III) Martha's king of hot man-baldness Eugenio Corini has signed with Torino on a one year contract. I believe I read something as soon as he was dumped by Zamparini that his aim was to be closer to his children in Northern Italy. Good for him. Torino, on the other hand, is becoming the Serie A retirement home. They are just positively ancient.

IV) Shabani Nonda's agent revealed that Chris (Shabani's nickname and a damn fine one might I add) almost wound up with Juventus last season before being loaned out to Blackburn. I guess this begs the question: If you play for the Old Lady, but it was only in Serie B, can you truly be considered a former Juve player? In other words, if a tree falls in a forest, and no one is around to hear it, does it make a sound?

I say no to the first and yes to the second. Because trees can hear and trees are people too.

V) Very good news from the surgeon who performed the ankle operation on Totti and also performed the two day long analysis of Ahmed Barusso's knee. His knee must have been in absolute shambles. Scary to think he'll actually come out stronger from the break.

VI) The current Bayer Leverkusen tandem of Juan and Rudi Voller will be riding into town tomorrow I believe (Wednesday at the latest) to hash out the final details of Juan's deal. I'm actually of the belief that a concrete deal is already in place, Rudi is just using this as an excuse to go on vacation and run up an expense tab on Bayer's books. Juan should be a Roma player by mid-week.

VII) This isn't Roma related news (although anything negative for Inter can be indirectly linked), but Real Madrid are getting ready for an all out assault on our favorite Swede, Zlatan. I can't deny Real is where he belongs and I will be making many a pilgrimage to the Bernabeu for the sole purpose of watching him dazzle La Liga. It's actually likely because of all the comments he has made regarding Juventus as the true champion and the lack of cohesion at the San Siro. Oh, that and he wants a significant pay raise - like double what he makes now. Anyway, Real are rumored to be offering 50m euros. That should do it.

It's funny how this blog has taken me from thinking of Bobo Vieri & Zlatan as "great talents but questionable characters" to "two of the best people to ever walk this planet." I imagine the people who actually do this seriously and for a living must find them absolutely exquisite journalistic fodder.