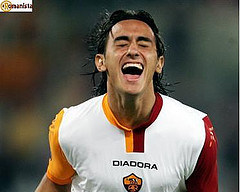 Doesn't that sound like a failed 1950's Motown group? I'm pretty sure that's also my favorite picture that I have used for the site yet. I really have no clue what context it's in. He might have just scored a goal or he could be belting out a tune, like Don Johnson - "Heartbeat" or something. You don't know real pain until you've had that song stuck in your head for 3 hours. Oh the humanity.

If you hadn't noticed already, I got pretty excited about Totti winning the whole European Golden Boot thing and spouted off a couple posts regarding the win. I'm actually tired of hearing myself talk about the EGB (but not Totti), so I can only imagine how you feel. I'm actually looking forward to hearing some completely inane and bullshit transfer rumors that make absolutely no sense whatsoever this week.

What do you know? The football gods have answered our prayers. According to some not-so-reputable sources (that's code for most of the British press), Roma have joined the race for mini-Welshman Craig Bellamy.

First of all, no. Second of all, definitely no. Bellers is rated at, oh, about 12m GBP according to Rafa Benitez - which works out to almost 18 million euros.

Not a chance Roma are planning to blow almost their entire current transfer budget on a guy who had one good game last season, and was largely invisible in the rest of Liverpool's games. Bellers has pace, can dribble and find the goal sometimes, but he almost never finds the ball. He's also a locker room cancer - and starts fights everywhere he goes. No thank you. Let West Ham overbid for him. My guess is Liverpool want to send Bellamy to Roma for Mancini, but not vice-versa. It's almost definitely a concoction of the English media, just trying to find someone who Liverpool could send in a deal. Oh, and Rafa wants Mancini. Keep dreaming.

Though I would be all for Bellamy at Roma if he was on a free, didn't play much and was heavily sedated at all times when not on the pitch. Doubt they could work that last part into his contract. Or maybe they could tell him sedated is Italian for drunk. That might work.

I) Aquilaninho was phenomenal yesterday in Italia's 3-1 victory over the Czech Republic (I did a running diary for the WC site, apologies as I was absolutely exhausted and could barely keep my head off the keyboard - so it's not up to par). He scored the first goal from a free kick in the fourth minute and was very good in a creative midfield role. Now, the David Pizarro - Aquilaninho debate is becoming a bit of a regurgitation. Aquilani belongs in the lineup somewhere - that's undeniable - and Pizarro is the most reasonable man to make way. Let's just agree to disagree. Cool?

At least until the Pizarro contract situation is resolved. Then we can fight to the death.

II) I'm starting the Royston Drenthe to Roma rumors right now. Yes, I just made that up, but come on, the guy has been lighting up the U-21's in the Netherlands. Ridiculous stuff. That and I'm nominating him for best braids in Europe. He's like a cross between a young Edgar Davids and Milli Vanilli, either one of them. That, my friends, is no small compliment.

* - This has given me an idea. Since people have been complaining about the lack of life during the summer transfer season (I agree), who's up for a best hair currently in football tournament? Pitting the players with the best hair against one another. I give two players and pictures, and you guys, the readers, vote for the player with the best hair in a seeded single-elimination tournament each day. Anybody game? I say two divisions, one with hair (i.e. Drenthe, Nedved) and one without hair (i.e. Corini, Henry) to decide the best of the best. Let me know what you think. Start making suggestions if you like the idea.

III) The new Juan rumors have his pricetag pegged at 6.5m as opposed to 8m+. A cool million and a half would be nice to save but at this point I'd just like to see him in a Roma jersey officially and stop with the rumors. I search a lot of web sites in a lot of languages for the obscure rumors and information that I post here and I'm starting to go mildly insane after reading the same story 185,329 times in 6 different languages that I don't really understand.

You hear me, Rudi? You got that? Close it. I'm about one more Juan denial from turning into Antonio Cassano. The crazy one.

IV) UEFA has released their new club rankings and Roma have moved up a notch since last year to 16th place, one behind PSV Eindhoven and two in front of Bayern Munich (suck it, Bayern). Juventus are still 12th despite a season in Serie B and without European action - though that 3.9 quantification for last year does look nice. I'm sure you need a Ph. D in quantum physics to understand the formula they've used to devise this ranking, but a couple things confuse me. Like Sevilla at 14th. I know they won the UEFA Cup twice in a row but don't they realize that's for the teams who aren't good enough to make it into the Champions League? That's kind of like crowning someone prom king even though he took his sister. It's just not right. Also, how the fuck did Espanyol get a 35 point ranking last year despite not winning anything, unless it involved sending Michel Platini male escorts. That's the only reason I can come up with.

Also, Fimleikafélag Hafnarfjarðar is ranked 218th in Europe. Write that down.

V) Luciano Spalletti reportedly has another one of his man-crushes (the whore) on Brescia defender Marius Stankevicius. Big-tall Lithuanian guy who would provide very good cover for the back line on short money. Little news regarding anything else.

VI) There was something regarding Lee Young-Pyo in the news and there might be some Roma interest again. Unfortunately, I had a religious experience telling me not to write anything about it.

The benefit to Semioli is Chievo would want players as the main value in return, because they need to climb back up to Serie A. Either on co-ownership or loan would work and it would help keep the monetary figure low for Roma. I still don't expect a resolution on this issue before 2017.

VIII) There's more interest regarding Giandomenico Mesto, and it seems he has decided that Roma is the place he wants to be, not the Merseyside. You see what he did there Semioli? That's called a decision.

There hasn't been any talk of any price but it is being said Reggina has interest in Matteo Brighi. Considering the logjam in midfield it would almost be ideal for Roma to offload Brighi while bringing in Mesto. More should follow, but Roma have been after him since last year - this one very well might happen.

IX) Our least favorite Swede, Christian Wilhelmsson, is rumored to be heading out. He wants to stay in Rome but Tottenham and Wolfsburg will pay the requisite 3m to Nantes, and Roma will not. The French club needs money so they'll ship him elsewhere disregarding his feelings. I'm trying not to get too ahead of myself, but this is nice. Very nice.

You know you want to.