Share All sharing options for: Fab Quag's Is Hot & Heavy For Roma 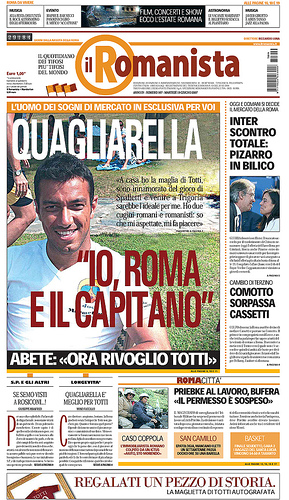 Update: Sampdoria have reportedly bought out Udinese's half of Fab Quag's for around 6m euros. This is very surprising, because a 12m pricetag is easily doable for Roma, especially if they're interested in sending other players to Doria. Also promising because Udinese were going to be dickheads when it came to working with Roma, though I am very surprised they "only" took 6m for his half. I would've thought it would be around 8m, but I'm not complaining. I really hope this precedes a Roma deal, this is a much more respectable pricetag.

See that picture of Fabio Quagliarella? See the little caption to the right? It essentially says, "to play for Spalletti and come to Trigoria would be ideal for me." All you Giallorossi faithful feel free to go take a cold shower and come back for the rest when you're ready.

Everybody good? Moving on.

The rest of the interview is more of the same, proclaiming his undying love for the club, the system, the city and the fans. Oh me oh my. Because Roma is so hot and heavy for his 40 yard lob shots, he is hugely flattered and that has made him all hot and heavy for Roma in return. Everybody's hot and heavy here. One of the most attractive appeals to prospective Roma players has got to be Spalletti's not-so-subtle man-crushes. Who wouldn't want the King of Totally Awesome Man-Baldness to be dreaming of them at night? I know I would.

Also in the Fab Quag's camp, Sampdoria and Udinese got together yesterday and decided that they would sell Fab Quag's if the right offer came along. You mean they actually needed an Italian summit for this? Like they expect us to believe Sampdoria didn't call up Udinese all year long after one of Fab Quag's ridiculous goals and just go, "Jackpot! Cha ching cha ching cha ching!" In fact, after the Lithuania game I wouldn't be surprised if they all woke up lying naked next to each other in a hotel suite with Bobo Vieri and a transsexual rodeo clown. Or something like that. All I know is yesterday was probably filled with a lot of incoherent shouting along with many many awkward high fives and man-hugs. Spalletti is sulking because he wasn't invited.

Me thinks the reason for the relative calm on the Roman transfer front has been the unclear status of Fab Quag's combined the Chivu's unrest. Considering that Roma want to add various players to the deal with each team (Vucinic, Curci and Montella to Doria; Brighi and Rosi to Udinese), this should take a long time to play out. My worry here is the management's track record of blowing what should be done deals with elite talent (see: David Suazo). Fab Quag's is obviously sold on Roma, whether Rosella and Prade can deliver remains to be seen. I'm not exactly holding my breath. Regarding ManU's increased interest, I'm not sure how likely a deal from Fab Quag's perspective would be. The money would be ridiculous, but he has said he wants to remain in the boot and have a ton of playing time. That's not happening in the EPL. He'll get paid regardless of where he goes, hopefully it's Rome.

I'm also making it official that if Fab Quag's comes to Roma he will then be referred to as The Divine Dimple and nothing else.

* - I wrote a little something a couple days ago (here, II) about Udinese's prez Pietro Leonardi having some issues regarding Roma publicly confessing their love for "their player." Well, not only does he not play for Udinese, as I mentioned - but he has NEVER played for Udinese. Not a single game. They sold half of him before he had the chance. What a nuck-futter.

News & Gossip:
I) Roma have bought half of Mirko Vucinic from Lecce for 3.75 million euros. That's right, half of him. Thank heavens for the Serie A layaway program. I don't know where Roma would be without it.

II) Rumors coming from Catalonia are implying Frank Rijkaard will be stepping down from his position at Barca and the club will make an all out effort to get Arsene Wenger. This could throw a cog in the Christian Chivu rumor mill as he is not French nor from a country where French is the official language, in case you didn't know. With beaucoup funds at his disposal, Wenger will make sure the French NT home games will be played at Camp Nou every weekend. After Moratti began taking his foot off the pedal and this possible changing of the guard in Spain, it looks like Christian might want to give Rosella a phone call and try to kiss and make up.

Oh, and if you're Barcelona's prez you get your ass on a plane yesterday, fly to London, hand Wenger a blank check with his name on it and say "whatever you want." Because they won't just get Wenger, he'll be taking Titi Henry and Cesc along for the ride back to Spain. That's just not fair. I hold Wenger in the highest regard as a talent scout and tactical manager (though his insistence on joga bonito does hinder Arsenal at times). In fact, I'm not sure there is a better football mind on the planet right now. Even if he is French. To add Cesc and Titi to that team? My god. They should average 6 a game.

III) Regarding Tottenham's interest in our least favorite Swede, I found this little blurb I wrote awhile back:

Such a shame, how thou shall be missed, Oksana. As an aside, let’s hope Christian somehow gets moved to CSKA London. I doubt Abramovich could keep his hands out of the cookie jar with another young, virile Russian-born femme fatale whose main goal in life is to be famous. Here’s to hoping.

While Tottenham may not be CSKA London (Chelsea for those completely out of the circle), the Spurs do play in London, which is enough for me. We need to see this happen. Abramovich needs this to happen. London needs it to happen. There's nothing like people helping people. Make it happen, Nantes.

IV) Marco Cassetti had an interview yesterday where he let the media know what's going on regarding his contract and such. Marco said he doesn't know what's going on wiith his contract yet but that he wants to stay in Rome at all costs. He also maintains that, although there is supposedly interest from Lazio, he will turn down all advances out of respect for Roma. Well damn, he certainly knows the way to make it into our hearts.

I will admit I was skeptical last summer about the right-back situation when he was picked up from Lecce. Cassetti never gave me the illusion that he's a defensive stalwart while at Lecce and Christian Panucci was approaching the minimum age to sign for Torino. Yikes. But Cassetti impressed me with his offensive abilities from the back line, even though his defensive prowess will never be compared to Nesta or Canna. He seems like a true tweener, someone who isn't perfect for the wing or the right back position, but can fill both well if needed. I'm also not sure I've ever seen a right back who drifts so much to the left wing as he does. I hope Roma shells out the million or so required to keep him around.

V) Rumors abound say that the head honchos will be meeting up will Moratti to discuss David Pizarro's contract situation. I'm thinking this is a bad idea and all considering Inter's arch-rivals just snatched David Suazo right from under them (bubbly all around!) last night and the Nerazzurri have got to be absolutely steaming today. As a result of this the contract talks might be postponed, which would probably be the best idea. Moratti is undoubtedly heading to Berlusconi's house to slap-fight him as we speak. Hopefully, because I'm worried Moratti will ask for Chivu in return for David Pizarro's contract and a ten-pass pack to Tan-O-Rama and Rosella will jump at it. I miss Franco.

Anybody else want to throw up at the sight of that picture on the right hand side of the page where Rosella and Moratti are about to make out? Me too.

You can thank me later for pointing that out.

VI) I took this theme from Inara's Ligue 1 odds, so credit gets sent in that direction. A gambling site has listed the odds of winning Serie A next year for all clubs involved even though the transfer season just started.

Well I guess they aren't Fiorentina fans. What a drop off from the top four, I find it hard to believe Roma has more than a 4x greater chance of winning the Scudetto than the Viola, as much as I would love to. That's also quite a leap of faith for Napoli. What do you think Sophia Loren would do if they won the Scudetto this year? Porn? And that Juve team, as currently constituted, has a better chance of winning than Roma? Cock & Bull. Doesn't mean much now, but it'll be interesting to see what the odds look like a week before the season.

VII) The Juan discussions have reportedly been pushed back later into the week. They're fucking with me. I know they are and it's working. I can't take it anymore.

VIII) Even though Real Madrid won the title Sunday, it looks as though Fabio Capello will be looking for another job next season. Last week Cicinho declared that if Capello stayed he wanted to stick around next year to play for him again, but if The Don Fabio was canned he would look at his option(s) and likely move on. Those rumors are about to heat up again.

I've got my own list I'll be unleashing. Any more?