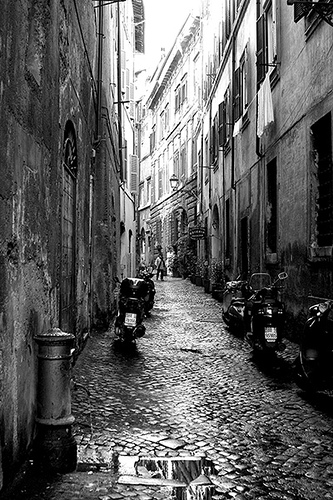 I've said it before and I'll say it again, until the Chivu situation is resolved the rumors are going to have no sex appeal. No sex I tell you. Unless Christian Vieri is involved. Then, well, you know. The weekend round-up of news, notes, rumors and other nuggets to digest while you enjoy the streets of Rome:

a) Roma are back after Diomansy Kamara of West Brom. The front office was deciding between buying Kamara and Tavano in the January window and ultimately went with Tavano. D'oh! The ex-Modena man says he desperately wants a move back to Italy and will sacrifice a lucrative contract in order to make it happen. Unfortunately, WBA doesn't feel the same and have jacked up the price another 3m euros since January - he must've had a helluva spring. Cause he's not that good. Priced between 7-8m euros now, the likelihood has dropped drastically as Middlesbrough look for him to replace Mark Viduka and don't mind doling out that sort of bank. We'll probable have to wait until the January transfer window opens up again to get our bi-annual Diomansy Kamara to Roma rumors.

b) Roma are throwing their hats into the ring to get the Azzurri's heir apparent to Francesco Totti, Andrea Russotto. He's been called the "Italian Messi" and elicits comparisons to Totti, Roberto Baggio and Antonio Cassano and is widely considered the future of Italian football. Normally, I would be much more excited about this but for a few reasons I'm a little uneasy:
- They're in a race with Juventus, Milan, Inter, Man Utd and Liverpool. In other words, it's the G14 lottery.
- Rafa Benitez has a big man crush on him. Roma can't compete with his checkbook.
- Like Cassano, he's a reported headcase.
- He was a Lazio youth product before he was sold for refusing to sign with GEA, a major sports agency who obviously are tied with Lazio somehow. Lazio told him he had no future in the sport and was sold to a second-divison Swiss club. Good call, Lazio. Real smooth.
- He recently stated that returning to Lazio would be a "dream move."

c) Francesco Modesto is thisclose to being the first Roman signing of the summer. Should be completed very soon. Quality short money move. Likely to replace Martinez/Defendi on the depth chart.

d) Udinese director Pietro Leonardi is refuting once again that he has spoken to Roma regarding Antonio Di Natale. This is starting to worry me a bit. Why are they so adamant about making sure everyone knows they aren't talking? Why is there so much smoke surrounding this?

e) The Giallorossi are sniffing around Palermo's Mariano Gonzalez, who spent this year on loan to Inter. He's one of those Spalletti type players - attacking mid or forward. Basically, a Spalletti player is someone with pace, stamina and footwork who can fly towards the opposition's penalty area and join The Roman Clusterfuck. Mariano Gonzalez has that and could fill roles on either wing, behind Totti or even upfront with Totti. Versatility like that is massive in the Roma system. I would bet they're thinking about a co-ownership or loan deal, but Palermo will probably request Aquilani to move to Sicily in return. That's what you would call a deal killer.

f) I'm really hoping Roma makes a strong push for Fabio Grosso. He would enable Tonetto to push up to left wing and fill a need there. But more importantly, Grosso needs a chance to prove his worth for the Azzurri and he can't do that at Inter - the team where Azzurri careers go to die. After all he did for Italia last year I think he deserves a place on this squad. I've had my reservations about The Don Doni since his hire(like everyone else), and I think one of his best moves would be to follow Lippi's lead and reward the campioni del mondo. They were in Germany for a reason.

I have to believe Grosso wants out. Knowing how much he treasured last summer, he has to want another chance on the international stage. Roma needs someone to fill a position on the left side of the pitch much more than they need Pizarro when Aquilani and Faty are in the mix. Let's return Pizarro's half for Grosso. Max Tonetto currently takes care of the entire left side when Mancini drifts into the middle or right side, which is more often than not. Grosso would allow Tonetto to stay on the left wing. Bring on Fabio.

g) Cristiano Doni, 34 year-old Atalanta midfielder, wants a move to the capital. What's with all the geezers calling out Roma? First Rigano, now Doni. I'm not age-discriminating but Roma is building something special here, not plugging holes. Outside of the back four, there isn't a spot on the squad that couldn't be aptly filled by a youngster, unless some go out on loan. And we only have room for one Doni on the squad.

h) Vincenzo Montella has drawn interest from Napoli, and it seems the interest is mutual. Napoli wants to bolster it's squad should they move up to Serie A, it's looking better each matchday, and Montella thinks he's still got enough left in the tank to be a big contributor. Hard to argue, he's had so many injuries his odometer is at about half of most players at his age. The problem is his massive contract, but he has said in the right situation he might be open to renegotiating. Should know more soon.

i) Marco Amelia wants to return to Roma someday, and would even consider it now. I'm sorry, I love Doni, but if Roma gets Amelia then I wish Doni and Curci the best of luck in the remainder of their careers. Amelia's decision making is better than both by leaps and bounds and he has great command of his net. Having started out as a Roma youth-product, let's let him finish what he started. You do not turn down the future Azzurri No. 1.

j) Franck Ribery has said he won't play for Bayern Munich and wants Marseille to start negotiating with Real Madrid. Can I please be the one to break it to him when Real submits a massive bid to Marseille....for Samir Nasri? Pretty please? I would pay big money to watch Ribery's reaction.