Share All sharing options for: Italia 2 - Faroe Islands 1: A Running Diary of Suckitude 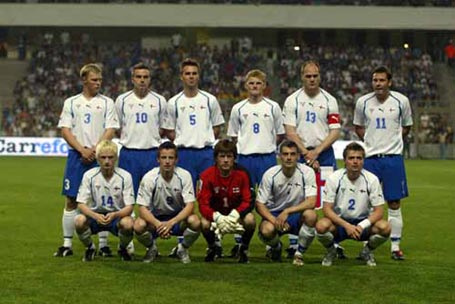 Here we are live from somewhere in the Faroe Islands! I warned you I might live blog the game but I've decided to go with a running diary because this could get real ugly real fast. So for the benefit of everyone who couldn't watch the game here's a running diary. Alright, my car's in the shop and I'm really bored. I didn't even know where the Faroe Islands were located before I wikied it so watch out for completely made up facts about them throughout the game.

Pregame: This stadium is much smaller than my high school stadium. And it's filled with empty seats. How many times do the Faroe Islands get to watch the Azzurri? Seriously? No one wants to come out? I figured it would be a national holiday. But as a plus they have a high school band (maybe the only high school band?) playing the national anthems.

Faroe Islands: A bunch of guys whose names end in -sen.

The game: And we're off!

2' Somebody forgot to tell Rino the Champions League final is over.

5' Pippo is flagged for an offside. In other news, grass is green.

6' The Faroe Islands #10 just took a shot from just outside the box and nearly hit the post! I'm sorry that was the corner flag.

9' The Faroe Islands stadium can fit about 5,000 people but they have one of those streaming electronic ad billboards. What, huh?

12' Pippo scores one of the ugliest goals in the history of Euro qualifying. Apparently The Don Doni just got back from a Mourinho seminar on how to send long balls up high all game long. 1-0.

14' Rocchi puts a scorcher about 1/8cm over the bar. Lazio sucks.

16' Wikifact: Faroe Islands has a population of 45,000. Yet they have a league? Is this where retired Scandinavian football stars are put out to stud?

18' Seriously, Rino is about to get a red card.

20' Aimo Diana is playing roughly around the Faroe Islands six yard box. Is that Spalletti wearing a Donadoni costume? Or maybe The Don Doni is hiding him in his XXXXL sideline jacket. That thing must double as the team bus.

26' Some FI player just beat Materazzi to an air ball and Marco had to pull him down with his arm in the box. Jesus, Marco. Roma needs to sign that guy to play against Inter.

27' I'm not saying this because he's a Lazio player, I'm saying it because I want the Azzurri to succeed. Tommaso Rocchi blows.

31' Del Piero just put a sweet ball behind the FI defense to Diana who passed perfectly to Pippo who had an open net. Not only did he miss an open net from about 8 yards, he was offside as well. Donadoni, there's a reason Lippi didn't play Inzaghi. Listen up.

34' Rocchi just got powerbombed by an FI defender. Del Piero missed the post on the free kick by about 6cm. Coincidentally, also the size of Pippo's Pippo.

36' They must really miss Toni. There have been about 3,748 crosses through the box and just as many missed headers. If Toni isn't available maybe it's time to call back a token wicked-tall-guy like Caracciolo who can get up top.

40' Italia sets up a nice situation at the top of the FI box and Pirlo brings it back out and passes back to Materazzi in their own half. Guys, it's the Faroe Islands. Fire hard, fire often.

43' Pippo knocks a ball off the keeper from about a yard and a half out. I'm willing to pay an FI defender handsomely to take him out.

Halftime thoughts: 1-0. The frontline has been terrible. Del Piero has done extremely well when he cuts in and plays more of an attacking midfield role but for some reason Donadoni wants him out wide. The midfield and defense have been alright. But seriously, Faroe Islands guys. Time for Quags to come on for Oddo or something. 3-3-4 should work. On the other side, the Islands squad doesn't seem to be star struck at all. Kudos to them.

46' No half-time subs, but Lucarelli and Quags are warming up on the sidelines. Best thing to happen to the Azzurri all game.

50' Gattuso just awarded a yellow for using a sundial to time his tackle.

52' Somebody needs to get Rocchi some kneepads. He has been going down often and in spectacular fashion. Someone get Vince McMahon on the phone. Free kick by Pirlo nicks the post.

55' Free-kick Faroe Islands! They may actually get a shot on goal this game. Nope, over the bar.

59' The benches are lined with advertisements featuring scantily clad women. Every time one of the players gets up you see a pair of breasts. Bravo, FI. Bravo.

64' Barzagli on for Marco. Gattusso sticks a leg in and knocks down some FI player. Would somebody get Rino off, he's about to miss the Lithuania game.

67' Lucarelli shoots from outside the box and the ball trickles about 15 yards to the left of the goal. He's not really convincing anyone they screwed up by not selecting him all these years.

77' Ummmm....the Faroe Islands just scored. Scored by one of the Jacobsens. UMMMM. Maybe I'm just overreacting to a meaningless goal, but I've had enough of The Donadoni Era. Where's Lippi?

So it's a bunch of Scandinavian guys getting with Scottish & Irish chicks? Cool.

81' Seriously, the FI are challenging this game right now. They might take a point. Do you think that goal is the greatest sporting accomplishment in the history of the Faroe Islands? I would guess so. And was that the lowest point of Gigi's career?

90' Rocket from the right side of the box from FI, Buffon just saved the win for Italia. That easily could've been a goal, too. This is a Trapattoni collapse at its best.

90' + 1' Nice cross from Quag's. I'm starting to think his position is on the wing rather than upfront.

I made that last part up.

Final: The Azzurri have a shitload of work to do this summer. Faroe Islands had a helluva game and deserved the result but Italia should have done much much better. This Lithuania game isn't looking so easy anymore. Totti just announced he will not have surgery and will leave the plate in until he retires so let's hope that he makes a secret return to the team and bursts onto the pitch next week.