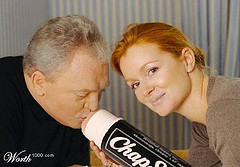 My Ass Is Chapped:

On Friday I was perusing Martha's column regarding the Thierry Henry to Inter rumors, which she unfortunately unleashed about 7 seconds before news broke of Henry's signing with Barcelona. I mentioned how much I hated when we write a post and right before or right after everything you just wrote was nullified by breaking news. Well, yesterday I was bitten in the ass by the Breaking News Monster. After writing about what I thought was fairly obscure French news, L'Equipe unleashed onto the world Julien Faubert's plans to sign for Rangers. Now, I don't really believe he has these plans, but it happened about 84 seconds after I had posted the news that Roma and Bordeaux would be meeting to rehash the negotiations for Faubert, and that it looked like all parties wanted to make Faubert a Roma player. So, yeah, my ass is chapped. I hate it when that happens.

* - And I don't care if that picture implies that my ass is roughly the size of Moldova. It's worth it (it's not, by the way).

As for yesterday's news, I'm skeptical. As Celtic offsider JT reported, Rangers is in "dire financial straits" and there is almost no way Rangers could offer a contract that would over shadow Roma (nevermind Milan or Arsenal, who are also after Faubert). I am of the belief that Bordeaux accidentally on-purpose maybe kinda let somebody know that Rangers was probably sorta ready to sign him. In other words, they bluffed to drive Faubert's price into a respectable level. I find it hard to believe a young, hugely talented Frenchman, who is aiming to return to Les Bleus, would simply want to go play in Scotland over Italia, where Raymond Domenech would let him rot. Hell, I find it hard to believe anybody would want to live in Scotland over the boot (alright, I haven't been to Scotland but this is Italy we're talking about here - bellissima!).

The one thing that makes me worry is the recent transfer of Jean-Claude Darcheville, also a former wine-countryman, to Rangers, as well as the comments of Pascal Feindouno, who has also been linked to Roma in the past. Feindouno mentioned he would be happy to move to Rangers and join up Darcheville, a former teammate at Bordeaux. Apparently Darcheville is a popular guy, because if Faubert is truly considering Rangers, I'm sure JCD has had a hand in the recruiting. The difference between the two is Faubert is 24 and Darcheville is 31, one is on the rise and one is winding down. I can't imagine a player who is trying to take his game to a world-class level would want to do so in the Scottish Premier League. So start ordering those Faubert #18 Rangers kits.

Update: It looks like Faubert may be headed to Rome after all, a few French websites and print-based sites are reporting he will be a Giallorossi player soon. A Bordeaux paper is even saying he will sign a four year deal with Roma at any moment. It could be hot air, but considering the two sides were supposed to meet this weekend, it's very very possible. More info coming. Seriously, I caught this about 4 seconds before I posted this. What irony.

Jean-Louis Triaud (Bordeaux prez): "We did not have direct contacts with Glasgow Rangers." So it was a bunch of horse manure. Good.

Roma have felt so left out regarding the Calciopoli scandal and the whole David Suazo situation, that they decided to take matters into their own hands and accuse Inter of dirty business. Wait, you say? Not Inter. How could such an up-standing club headed by a great man like Massimo Moratti be a part of such chicanery? Looks like Serie A's hall-monitor found their rebellious streak. Apparently they contacted Christian Chivu illegally and may be subject to an investigation. Did it really take this long for people to realize this? Anyway, it's your gratuitous weekly Serie A scandal. Enjoy!

As for the dealings with Barca, nothing new really. Some reports are saying that Chivu will be a blaugrana by tomorrow and that Roma will be getting 12m plus Ludovic Giuly, who will be immediately shipped to Torino in a deal for Alessandro Rosina. This would be absolutely ideal, which means it's not happening. I really don't see any players coming back in the deal, and I definitely don't see Torino taking Giuly for Rosina, even though Torino is damn close to Giuly's beloved France (isn't he from Marseille?). And if Ludovic Giuly really does get sent to Roma I'll fly to Rome myself to take him out. If you think I don't like David Pizarro, you haven't seen anything. I HATE Giuly. Despise him. The only reason I want him in Rome is to have a midget-fight to the death with Pizarro.

I) So, uh, there's a big picture of Christian Chivu and Gianluca Zambrotta on the front page of il Romanista saying something like "Give us Zambrotta for Chivu." Right. Of course. Barcelona also asked about Daniele De Rossi. Anyway, back to reality.....

II) Wait, maybe not. Reggina are seeking €6m for Francesco Modesto. I'll fully admit that I've seen this guy play twice, so I couldn't exactly write his autobiography, but €6m? Really? I'm of the belief that every time the Reggina prez opens his mouth regarding Giandomenico Mesto or Modesto he's talking about the other one, because the stuff he says makes no sense. I'm also of the belief that dinosaurs never existed and the sky is green. So make your own call.

III) Reportedly Emirates Airlines have signed on as Napoli's sponsors next season, which means the reported deal will Roma fell through. I'm sorry, but how utterly incompetent do you have to be to fail to secure the services of a sponsor in a city like fricken ROME. Where there might be, eh, some exposure. Let's run down a list of real life comparisons:

I think you get the idea. It's hard to screw that up.

IV) Arsene Wenger has a man-crush on Aquilaninho. This is exactly what I feared. Arsenal won't happen, but he will obviously draw significant interest from G14. Would somebody in Rome take out Pizarro ASAP? I'm terrified of losing Aquilaninho because of that numbskull.

Oh, and isn't Aquilaninho a little old for you, Arsene? Thought you liked em younger buddy.