The Great Hair Debate: The Bracket

Share All sharing options for: The Great Hair Debate: The Bracket 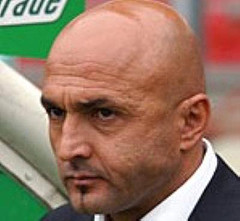 (Luciano's pissed because he wasn't invited.)

Alright, here we go. Since there is so much non-news going on during the summer, and I'm tired of regurgitating the same old crap day after day, it's time to debate the most awesome/ridiculous hair in the world right now. There are no set-defined rules regarding how you vote, just go with your gut. Some are a career of hairdo's and some are one moment in history, but what a great moment it was. Almost all are over-the-top, because you know how I operate. The sillier the better. I know I left a bunch of deserving people off this list, but I got a ton of suggestions and some people might be mad at me. The one that immediately comes to mind is Esteban Cambiasso (apologies to Mike). He was on the list but I found some weird sweaty picture that almost made me vomit, no joke. It was like he had just come off the set of Alien, so his hair was just ridiculously slimy, and then got into his car on the autobahn with his head out the window a la Jim Carrey in Ace Ventura so that it dried in place. Oh, it was brutal. Anyway, there was a slight change in the plans, the former player debate will come after this one's over, with 32 contestants here it was just a tad much to handle. My hard drive can only handle so many ridiculous hair pictures before it dies on me, so for the sake of not buying another new computer, we'll keep it to current players for now. If you don't like the seedings, don't get angry. Some are random, some are specified match-ups (you'll be able to tell). I came up with an original ranking 1-32 and they are relatively in the same order. Also, you don't even know some of the ridiculous haircuts I found from way back in the day. So don't prejudge.

The Schematics:
a) 32 players, two groups seeded 1-16 each, single elimination. 1v16, 8v9, 5v12 and etc etc etc.
b) There will be two separate stages, the current players now, and, after a current champions is elected, the group of former players. The current and former player champions will square off to decide the best do ever.
c) I'll unleash two match-ups per day, in separate posts, where you can vote in the comment thread. I'll tally up the totals at the end of voting for that round and the winner will move on.
d) Don't vote in this thread now because the photos are hairdo specific, so wait for the actual match-up posts.
e) It'd be cool for everybody to vote, so you "lurkers" out there let your voices be heard. Just remember, I can't count past 57 so not too many.

South Bracket
1. Pavel Nedved AM Juventus (it could be no other way)
16. Christian Wilhelmsson RW Nantes baby!

Obviously the Number 1 overall seed is Philippe Mexes because this isn't an AS Roma site or anything. Though I'm sure a lot of the ladies would love to have hair like him, even as a guy I would take it in a second. Also, the overall last seed is Rodrigo Palacio because he is just a disgrace to follicular sculpting everywhere. The first two matchups will be Mexes v Palacio and David James v Luca Toni. Don't underestimate Luca Toni here, I'm pretty sure he didn't make it to Serie A until later in his career because the FIGC conspired to keep whatever that thing on his head was in the lower divisions. Until then.......