There are just so many to choose from. Most of them actually belong very far down this list, but he got major points for continually failing but getting right back up and pressing on. The man has no quit when it comes to bad hairstyling. 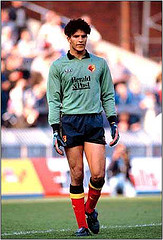 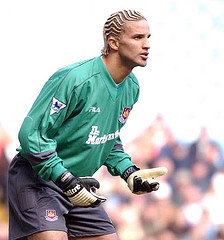 If he had gone with just that last one he was the easy favorite for the championship. That's one of the best side parts the world of sporting has ever seen. Hands down. But that first one took him down quite a few notches. He looks like Sideshow Bob from the Simpsons. Just a poor decision. The braids are somewhere in between. There were certainly some ups and downs over the years (just like his play), but it has been a quality career for David. Bravo. Most people would probably think of this as a surprise inclusion, but Luca can hang with the best and worst of em. Typically he has that great free-flowing Italian hair that looks like it's wet 100% of the time, but has stepped over to the dark side on occasion. Notice how it looks as though it has just been washed in Crisco. It's understated, but it's great nonetheless..... Ladies and Gentleman, The Luca Toni

Short on the sides and long on top aka Hi, I'm a 12 year old boy. It's decisions like this that come back to haunt people (like great Italian strikers going to Germany. Why, Luca? Why?).

I'll be sending out a post on all the dealings for Roma later today. It appears Real are jumping in for Chivu, Bordeaux has lost its collective mind and now wants €15m for Faubert, Roma have pseudo-quasi-officially signed Mauro Esposito, and Inter are dirty bastards because they went behind Roma's back yet again to negotiate with Cristian.....