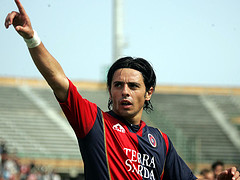 The Great Hair Debate has kicked off. This isn't like a presidential election where your vote really doesn't matter, so everybody get on board and vote.

Cagliari's president has stated Roma have finally kinda sorta signed what seems like their perennial target, Mauro Esposito. However, Roma has officially issued a statement of refusal on their website, which is the same thing they did with Juan. It seems to me that they might be negotiating with someone else (Faubert, Cicinho?) and they don't want a signing to adversely affect negotiations. I'm pretty sure at the time they refused anything regarding Juan because they still held out hope for a Chivu extension and they wanted him to feel all warm and fluffy inside.

As for the deal, it is being reported as loans of Gianluca Curci, Daniele Galloppa for this year's co-ownership (they're saying "release" but this is essentially what I read out of it), and then roughly €5m next year to buy him outright. If this is true, pigs just flew over a frozen hell. That's just awesome business, which makes me not believe it. The guy has huge ability; he's speedy, has a bull-like mentality when cutting in from the wings and has an awesome eye for goal for a winger (16 in 04-05). The injuries have hurt him lately but it's not too much to ask for him to score 8-10 in Spalletti's sytem. If this is the deal, I really hope it gets done. Roma has nothing to lose here. But of course, I doubt this is the case.

Barcelona have been under the impression that they could get a deal done within the next couple days. Think again. As expected, Real Madrid jumped into the fracas and have made this a three-way scrum for the Christian Chivu. Inter also continued their practice of dirty business and contacted Christian to negotiate contract behind Roma's back. I'm not going to go over the top here, but I will lose all respect for Christian if he forces a move to Inter over Spain. Going to one of Roma's biggest rivals who you know are low-balling the club for your transfer fee just spits in the face of the club and city. Let's hope this isn't what is really going on.

As for Real, it's unclear what their motivations are. They wanted Chivu when he was at Ajax so it's not hard to believe they'd want him now, especially considering the departure of Roberto Carlos and the likely departure of Fabio Cannavaro. They may be just trying to drive up the price for Barcelona, but my guess is they'll do whatever they can to keep Christian away from Barca, especially after Barca poached Thierry Henry. We all know the one guy Roma wants in return from Real is Cicinho, and my guess is this is the only reason he hasn't been sold yet. He's the ultimate negotiating chip. I've thought all along the deal Christian would be sold for was Cicinho plus cash, I see no reason to change that thought now.

Is it me or have the lot of Ligue 1 lost their collective minds this summer? Bodmer for €6.25m, Keita for €18m, Ribery for €25m, Malouda being pegged at €25m, now Faubert. I blame Jean-Michel Aulas. But who doesn't.

II) Roma has reportedly refused all overtures from the rest of Serie A for Matteo Brighi. Really? I, for one, am all for this guy being given a chance - he's been on the payroll long enough. But I don't expect this is the reason for Roma refusing to sell him, I'm suspecting he's part of a deal with Reggina.

III) Speaking of whom, Giandomenico Mesto is almost Roma bound. I don't want to jinx anything, but this would just be an awesome awesome move. After the sale of Chivu more will happen. Fingers crossed....

I'm very curious as to what a pricetag would be.

IV) I've been continually looking for information regarding Ciprian Marica, because he's in the class of guys that Roma has been after for so long that it's hard to believe they won't wind up in Rome, i.e. Cicinho. I found some news from Saturday which was regarding Marica, Roma and €4m. I have no clue what it says because it's in Romanian, but a crappy online translator said something regarding late interest of some sort from Roma. Anybody know Romanian? Because it would be greatly appreciated.

(A lot of people are writing this transaction off, but I would not doubt at all if Roma used a big chunk of Chivu's money for him. They've wanted him too badly for too long.)

* - Finally, can we all get on the same page here. Can everyone just get a sense of humor here? Do you really think I hate any of the people I write about? Do you think I wish injury upon Roma players? I love the club and a lot of the stuff I write is for entertainment purposes. Some is just to stir up debate and cause a reaction. I've had people threatening bodily-harm and whatnot. If you feel that strongly I'll give you my address and I'll pick you up at the airport. So everybody just lighten up (this is only for a select few, the majority of you are awesome). That includes someone here at the offside. Deep breaths and relax.

This totally went from exciting news to awkward silence. Like when you make a Hitler joke on a first date (don't do it, trust me). Group hug. Enjoy the great hair debate.