The Lovefest Begins Again (Chivu, You Are NOT Invited)

Share All sharing options for: The Lovefest Begins Again (Chivu, You Are NOT Invited) 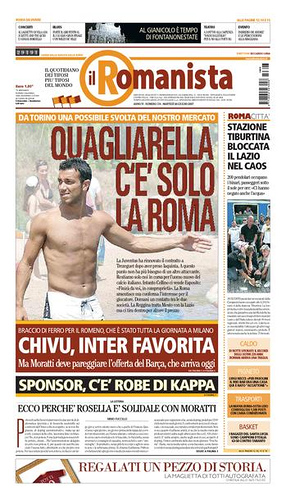 Fabio Quagliarella is that girl with the evil step-father who never let her go out because she was just a little too pretty and he wanted to keep her home at all times. She finally got her one wish to go to the prom and it was probably the greatest day in her adolescence. The girl had never been on a real date before, but she damn well shocked the crowd at school functions. When word spread she was going to the prom the good-looking smart kid who she's always had a crush on asked her immediately, and she didn't hesitate a second to say yes. It was going to be a magical night of Cinderella-esque proportions. Then one day the uber-popular jock who just got out of the local juvenile detention center shows up at her house in his daddy's brand new Ferrari with a big bouquet of flowers to ask her to that same prom. She couldn't pass up the chance to go to the prom with The Guy as her first real date, so she called up her former crush and said she found a new date but she wanted to remain friends. She starts spouting off to her friends how sexy, popular and rich her new date is and how much she can't wait to be the belle of the ball that weekend. A night before the prom, the superstud athlete calls her up and says "Hey, I'm sorry to do this, but, remember my ex? You know, the one who made rude gestures to me in front of everyone at the stadium during the last game of the season? Well, we made up and got back together so I'm going to be taking her to the prom. Sorry." Click. So she bawls her eyes out and drowns her sorrows in a tub of mint chocolate chip ice cream. Her friends tell her to call up her original date, who is trying to scare up his own replacement with some of the international exchange-students, albeit with little luck. So she shows up at his house that night begging for his forgiveness, telling him how much she really regretted her decision all along. Then the good-looking smart guy says.......

You figure it out. I can't. I'm pretty sure I just wrote a teen-movie script right there too. You know, one with Jennifer Love-Hewitt, Lindsay Lohan and a bunch of other failed TV actors who continually play teenagers even though they hit menopause six years ago. You know the group. I think it was called "The Mickey Mouse Club."

And if you didn't get that the evil-step father is Udinese's Pietro Leonardi and that Juvenstus signed David Trezeguet which likely eliminates Fab Quags from any Juventus consideration and now the Roma & Fab Quags lovefest can begin again, well, I don't know what to tell you. Sometimes you need to bring yourself down to my level, you know? Smarty pants.

I'm pretty sure I just had an intellectual seizure. Disregard everything you just read. Can we move on? Cool.

It's hard to reserve judgment at this point, but I'm going to do my best. I'm hoping this is simply a negotiation tactic (possible) by Chivu's agents to get the Spaniards to drive the contractual numbers up. If not, then Christian Chivu has just become the most hated person in Rome. It's nearly impossible to justify moving from a club to its rival after they've done nothing but been loyal to you. And for a paycheck? Christian is becoming the Romanian Ashley Cole. That's sad.

There's also something which implies that Moratti used the Pizarro contract in a long phone convo to force Rosella to sell Chivu to Inter:

First, if Rosella bows to him here then there needs to be a coup d'etat at Trigoria immediately. Second, Roma got bent over and violated repeatedly for Pizarro. I don't know anyone who feels this was a fair price for him, regardless of their personal feelings. Is Roma supposed to feel privileged to get a Lilliputian Internazionale reject? Face it, the guy was bought for €8-10m, sat on the bench for most of a season and somehow gained €2-4m? What? Huh? I'm not trying to bring little David into this at all, but there's little to argue about. They overpaid for him and for Inter to claim otherwise is as bullshit as bullshit gets.

I have a feeling this will be finished within the next 24 hours. Be sure you'll get an obscenity-laced tirade if/when Chivu forces a move to Inter.

Hey, Who Wants Leftovers?
I) Our favorite Ghanaian central defender, Samuel Kuffour, has revealed he is likely to move abroad, with Greek and Turkish clubs ready to break down his door. Good. I was getting worried there for a second that Roma might keep him around as an emergency 4th defender. Probably Roma's best bit of business last summer was handing him a bonus to go out on loan. What's the real life equivalent of that? Erectile dysfunction?

* - Now that we've touched on menopause and erectile dysfunction, I'd like to formally announce that this post has been sponsored by.....

Cialis: We bring your A game for you!

II) Wait, more players are dreaming of Roman moves this summer. Giandomenico Mesto is pulling a Fab Quags and telling the media he's hot & heavy for a move to the capital. Group hug.

I was of the belief that, while he might have played on the outside of the backline, his play in the midfield was located more in the center. Is there anywhere this guy can't play? Unfortunately, he is being seen as the replacement for Julien Faubert on the right wing because negotiations there have stalled. I suppose after Chivugate the pieces will start to fall in place.

III) Even though the club issued an outright refusal yesterday regarding a deal with Cagliari and Mauro Esposito, it seems as though a deal is thisclose. Well, what would a day in the Serie A mercato be without a little scandal? I like Cagliari. They're the small team that has my heart, but Massimo Cellino is starting to show signs of Mercato Tourette's, spouting off deals before they're official. It's like each of the islands has a crazy prez, Sicily has Zamparini and Sardinia has Cellino. One's a good guy, one's a nuck-futter. I'm of the belief that they should have a pillow fight to decide who is the King of the Mediterranean Loonies.

IV) As for an actual Fab Quags deal, il Romanista is reporting that Roma are ready to hand out Mirko Vucinic on loan plus Matteo Brighi, Ricardo Faty and Aleandro Rosi in other fashions, as well as €10m or so. I doubt this is an official offer, more speculation because Brighi and Rosi were drawing interest from Udinese when Roma was courting Sulley Muntari. I have little issue with Mirko going out on loan if it's in a deal for a player who fits into the system better right now. I'm sure an offer will be made at some point, but this is Pietro Leonardi we're talking about here. You could offer Daniele De Rossi and he'd be offended you want a goal scorer for a defensive mid. The man has a brain the size of a Cheerio. With the hole.

V) Christian Abbiati has officially joined Atletico, looks like Torino is in need of a netminder. I would be shocked if they don't contact Roma regarding Gianluca Curci. I've lost almost all hope of prying Alessandro Rosina from Torino, but there's always that little glimmer of hope if the two teams are discussing players......