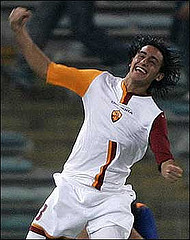 Alright, let's start this one off with a surprising revelation. According to Alberto Aquilani's agent, Roma supposedly turned down a straight up swap of Andrea Barzagli (you know, stud defender and future captain of the Azzurri - well, it's between he and De Rossi at the moment) for Aquilani immediately. I didn't say Palermo turned it down, I said Roma. Since Palermo have made no bones about their lust for Alberto recently and have resigned themselves to losing Barzagli, I suspect this is true. And tell me where you've heard this before: He's a young stud central mid equally adept at attacking and defending, he plays with passion for the club he supported as a youngster growing up in Rome and he recently committed himself to Roma for life, and wants to extend his deal which does run up for another 3 years. That's quite a statement from a 22 year old. Sounds like that De Rossi guy. I love the fact that Roma isn't building a squad of Galacticos. Instead, they're building a squad around the most talented youngsters who spent their youths handing their hearts over to the Giallorossi. The passion and intensity that comes with that history cannot be underestimated and I'd take that anyday over a squad like Inter or Juventus who are comprised mainly of mercenaries. These guys are going to live and die with every victory and it will drive them further than a fat check. Look what Maldini and Costacurta did for Milan, they gave their careers to Milan and it rewarded them handsomely. The kid has a flair for the spectacular, too. Those spectacular displays will draw fans and put him in the Roman-born superstar (marketing) triumvirate with Totti and De Rossi. I'm excited. Real excited.

Other stuff:
a) Update on yesterday's Chivu rumor; Chivu for Samuel, Pizarro's half and 4.5m euros. Goal.com reported that that deal valued Chivu at 23m euros. Excuse me? Let's break this down:

An oft-injured benchwarming defender is worth 12.5m euros? Really? I meant everything I said about Samuel yesterday regarding his ability to be one of the best defenders roaming Europe. But what have you done for me lately, Wally? Or in the last three years? He's not worth that much lira. Not now.

Oh, and expect this rumor to fizzle off as the week progresses. Chivu seems to be stalling, and I bet I know why. La Liga still has two weeks to run and he wants to know how Real feels about him. That's fine, Roma has a good rapport with Real Madrid and I'm sure there is nothing they would like more than to stick it to Moratti and keep Christian out of Milan. Real would have no problem shelling out the requisite 25m or so. If that's not enough juice for you, there's this from late last week:

"We are tired of hearing these rumours," slammed an evidently fed up Chivu, finally coming out to deny things in person. "I say it for the 1000th time, I find myself at ease in Rome and I will probably continue living here even after I will retire from football", continued the Romanian Captain. "Rome is a fantastic city and I repeat, I enjoy living here a lot."

b) Oh, and this is from goal.com also:
Inter want Christian Chivu at all costs and are ready to offer Roma the other half of David Pizarro and Mariano Gonzales in order to sign the Romanian defender.

What? Could we get a clue here people, please? Mariano Gonzalez was on loan to Inter last year. Though, actually, that does sound like an Inter move. Offering somebody they don't own in exchange. And did they mean to tack on about 20m euros to that offer?

Like I said, expect the Chivu to Inter rumors to fade away.

c) I need to find out more, but I read somewhere that Stefano Okaka Chuka will likely commit his national future to the Azzurri. I'm not really sure if this was even up for debate, he plays for Italian youth teams, but it's good news nonetheless. He was born in Italy to Nigerian parents and has the option of playing for the Super Eagles as well. Believe me, the FIGC is very very happy about this.

d) There's little to back this up (mostly radio talk), but the rumors emanating from la citta eterna are saying Roma are hot and heavy after Fabio Quagliarella and that it may only be a matter of time before he winds up in Rome. Quags has stated there is mutual interest in a Roman move and talks are continuing. Roma envision him to be a phenomenal winger in Spalletti's system and, after watching the few crosses he put in yesterday, I'd have to agree. I still think he's overvalued at 16m, but I've really turned a corner on him over the last week. I guess I was envisioning him as a striker and I'm not sold that he can become an elite No. 9 like the Italian press make him out to be. But as a winger cutting in or as a deep lying-forward? Absolutely. He could do well in The Roman Clusterfuck. Anywhere between 8-12m and I'm sold if Suazo goes elsewhere. Plus, he's only 23. De Rossi, Aquilani, Quags and Okaka Chuka are all considered future Azzurri starters. They would wreak havoc on Serie A.

e) Matteo Ferrari's contract negotiations are at 99%. Good signing, he's a good squad member. In other words, Roma is screwed if a starter goes down.

f) The more days pass the more comfortable I am allowing Pizarro to return to Inter or be sold and take half the loot, and that might turn out to be the case. I really think De Rossi/Aquilani/Faty can take care of the two "defensive" midfield positions and Rosi/Taddei/Incoming Winger can take care of backup duties in front of them. Spalletti has promised "two wingers and a central midfielder" so that should provide significant depth even if the kids go out on loan. Alright, maybe not kids, they're my age. But you know what I mean.

g) Alvaro Recoba wants to join Torino after stating last week that he could never play against Inter with another Italian team. You stay the hell away from Rome, Alvaro. You hear me? We don't want yer kind 'round here. Somebody needs to do him a favor and take him out back Old Yeller style.

h) Roma have inquired about Claudio Bellucci, a 32 year old striker currently playing in Serie B. I'm going to save you from reading a lengthy rant and end it like this: No. Period.

i) Gianluca Curci will decide after the Euro's whether or not to stay with Roma. He still doesn't know if he wants to play 10-15 games with Roma or 30-35 with another squad. Torino seem to be very interested and Roma have already offered him on a free loan as part of the deal for Rosina. As long as it's on a loan that's fine, the kid has huge potential but he needs experience.