A Requiem For Antonio Cassano's Career

Share All sharing options for: A Requiem For Antonio Cassano's Career 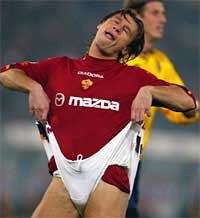 For a couple reasons I'm avoiding all Roma news today unless something major pops up and watching 2001 Scudetto victory videos and stuff. One, reports coming from Cagliari's prez claim Suazo has turned down a Roma move for Moratti money Inter. I'm sure you can draw your own conclusions about my feelings on that one. And two, this morning's Il Romanista had a cover story with a picture of Chivu stating, "Roma Damma il Cinque(Roma give me five)." I jumped up saying "5 million??? 5 years??? What!!!!" I was overjoyed until I realized Chivu was holding up an open palm. Like "Roma, give me a high five." So cruel. I can't even tell you the range of emotions that I experienced after that, eventually ending up in an exasperated heap of flustration (watch out, I'm starting up my own lexicon). So, in honor of avoiding Roma news, let's see how a former Giallorossi superstud has been doing.

It's a shame to see someone so gifted ruining a potentially massive career. Everyone thought Capello would be the one to turn him back around in Madrid, but that has proved even more volatile than before. I would've paid big money to have heard his "Have you got no shame? I fought for you in Rome and this is how you repay me?!?!" tirade aimed at Capello. I know Cassano's not exactly da Vinci but doesn't he know Capello doesn't have a loyal bone in his body?(See: Roma, Juventus)

When he was 19 he was bought for a ridiculous 28m euros(3m more than ManU just paid for Anderson) from Bari. The guy was supposed to pair with Totti to create one of the most deadly partnerships in Europe, both for Roma and the Azzurri. It's really a shame but it's his fault. Let's hope for his sake he gets his act together and becomes what he should be, then let's bring him back. If only for the severe paucity of ridiculous goal celebrations since his departure from the Olimpico. The corner flags of Serie A have felt far too safe while he's been eating and partying "playing" in Madrid (he hasn't played since March). If anything, he needs to return to Italy to strike fear in the hearts of those bastards.

A little video of his earlier days, with the goals for Bari and Roma. How many times do you see a header scored from outside the penalty box? Sick.