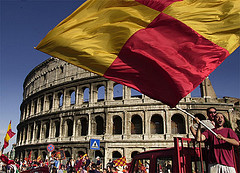 Warning: I need to get something off my chest.

I'm still at a loss for words as to how one of the biggest clubs in the world in one of the biggest and most well-known cities in the world (not to mention the home of a former EMPIRE) can be owned by a family who's main cash cow is a business that runs on a 200 FUCKING MILLION EURO DEFICIT. The fucking lovechild of Albert Einstein and Marie Curie could not explain that one to me.

Thanks, I feel better. I think the multitude of rumors involving Roma trying to pinch pennies by obtaining a loan of Franco Semioli's right leg and buying co-ownership of Fabio Quagliarella's left testicle are starting to get to me.

Roma are after Bordeaux's Julien Faubert, and the Frenchman and his representatives have flown to Rome to discuss a possible deal and contract with the Giallorossi. Now, last week I said in my transfer prediction there would be someone coming out of the blue. I chose Juan Pablo Francia, also of Bordeaux. My other choice was Faubert, so obviously I went with JPB. You can choose not to believe it, but I felt they were both a good fit to the Spalletti-style but I chose Francia because he has stated numerous times he wants out of Bordeaux. I really could've knocked that one out of the park, @#$%. Anyways, he is a pacy attacking winger/midfielder who has been tipped as a future French star (as far as I can tell he has one cap and one goal? Inara, Laurie can someone help me out on this? For now we'll go with the old standard: Raymond Domenech is a doofus). I'm not sure how well he played this year but he is still pretty young, 23, and has a very respectable pricetag of 7m euros. Oh, and he's Henry's twin(no, really, that's Faubert). The fact that he is allegedly in Rome right now is extremely promising, not to mention the pricetag is very reasonable for someone of his class. More to come.

Other updates on players who have been linked with Roma:

David Suazo: Yesterday it seemed David was bound for Inter, but after Massimo Cellino, Cagliari president, met with Moratti, it looks like a deal is galaxies apart. So get this, Moratti final-offered 2 bit part youth team players and SEVEN MILLION EUROS for David Suazo. Cellino called the offer embarrassing and that to accept it would humiliate Suazo, and he's right. This is the same man that shared the award for Best Foreign Player in Serie A last year with Kaka, and what's he worth? 50 million? More? Knowing how loyal David has been to Cagliari it's difficult to think he would press for a deal that would hurt Cagliari in this fashion. There should be another Calciopoli investigation into that offer. Internazionale is an embarrassment to sports clubs all across the world.

How this affects Roma remains to be seen but it certainly throws a wrench into things.

Ze Roberto: Ze wants to join the Brazilian contingent setting up shop in Rome. Absolutely! He would be on a free, he is fast as hell, has immense skill and is a natural left winger. The downside is he's up there in age (33) and he would be taking up a non-EU roster spot supposedly designated for Juan. This will take some time to play out, but he is the original Mancini and it's hard to argue taking him on a free transfer. In fact it's near impossible. The flair bursting down the both flanks would be mind-boggling and the service to the middle immense. Totti is drooling right now.

David Di Michele: David went from saying he didn't know if he could turn down a move to Rome last week, to pleading for a move to Roma this week. I could see him as a good alternative if Roma fails to land Suazo/Rosina/Quags, provided the price is very fair. Oh, but Roma haven't contacted him and have stated they aren't interested. I normally have a soft spot for players who grew up supporting a team and then will do anything to play for them later in life. So this one's for David's agent: Tell your client to shut his mouth and stop embarrassing himself and start earning your cut you nincompoop.

Cicinho: Il Romanista and Roma are reportedly rehashing the Cicinho deal that fell through after his injury last fall. It has almost been a foregone conclusion that Cicinho will find his way to Rome this summer and it cannot be soon enough. Price? Nothing concrete yet, but the previous deal was supposedly around 6-7m euros. After a year of injury and riding the pine, a deal around 4m would be feasible. Also, Real Madrid have supposedly made contact with Sevilla regarding RB Daniel Alves. Even if Alves doesn't join Real, it's likely Cicinho's Real tenure has come to an end. It has been said a deal was set last summer to swap the two defenders but Cicinho nixed the deal. Maybe in hopes of a Roman move? I say move now and move fast. Cicinho has Spalletti written all over him.

Vincenzo Iaquinta: He's headed to Juve according to Udinese's president, with the deal nearly being complete. Iaquinta's place on the wishlist looks to have been replaced by Fabio Quagliarella.

Fabio Quagliarella: Speaking of Quag's, there have been conflicting reports regarding him. I've neglected to mention that Quag's is actually half-owned by Sampdoria and Udinese. Of course, when Udinese sold half he was worth a small fraction of waht he is now. Jackpot! So, Roma are seeing what a half-ownership deal might look like and are talking to both clubs regarding such a deal(you know, the Italian football version of layaway). Rumor is Sampdoria would be the more likely of the two. Unfortunately, a report also stated there is now a chance that Quagliarella might stay in Sampdoria another year. But wait! Another report stated Roma are offering Vucinic in a deal for him. Even though Vucinic was on loan. Love the Italian media, love it. I'm still not 100%, but if Quagliarella has another year like last year in Sampdoria, Roma can kiss him goodbye. The fee would start to rival US gas prices, and you know Roma can't afford that. Buy now, save later.

Juan: Juan stated in Il Romansita today that he nearing a move to Rome, and that he's looking forward to scoring goals. Juan, you're awesome. The guy is a central defender and what does he want to do? Score beaucoup goals. That's all. Would somebody lock this guy up right now? But in all seriousness, it looks like the tactics of Spalletti are really marketing the Giallorossi shirt well. Guys know when they come to Rome they will score often, and that's a) really fun and b) a huge boost to their image. Not only do the tactics work on the pitch but they're also a sales pitch. That's the genius of Luciano Spalletti. The front page also has a one line statement saying that tomorrow (or today) Roma will meet regarding Chivu, Juan and Faubert. No clue what that means. But they're talking. Cicinho, Juan, Chivu and Faubert would represent a hugely succesful, and likely finished, summer. As a fan, all day every day, but my posts would suffer dramatically.

Would somebody wake me up when this guy makes a decision.

You get the gist. Let's keep it this way.

* - Oh, and I felt a little better about the Sensi family when I saw this. Sing along with me & John Cougar Mellencamp.......

In a bit of shameless self-promotion, I'll be manning the Italia section over at the World Cup/UEFA Euro's site from now on. So come on over when you're sick of hearing about Roma (I'll have something up later today). I got lucky and I only work 3-4 hours a day and I get to call my own shots so I need something to fill the big chunks of time I have open. That and there's only so much I can write with a 20m transfer budget in Rome. If I'm still bored, I'm going to start up www.firedonadoni.com.