A Plethora of Absurd Rumours (And Chivu Is Not Going North)

Share All sharing options for: A Plethora of Absurd Rumours (And Chivu Is Not Going North) 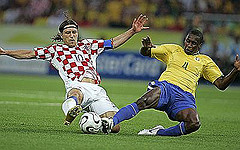 Martha and I are going to fight to the death over this.

Unless you've been living on Pluto, or America, over the last 3-4 days then you probably have heard that a deal sending Chivu to Internazionale is "imminent." For those of us living on Earth, that being anyone outside of the media or Milan, let's stick to the facts. Chivu has demanded that Roma match the 4m euro per annum deal that Inter offered or ship him out. Rosella Sensi said no, that the best they could do was the 3.6m offer given to Phillipe Mexes, and most would wholeheartedly agree with their stance. Chivu is good but Mexes is younger and had a better year last year, and he is the lynchpin of the back line, now and for the future. If I had to choose between Mexes and Chivu, it would be Phillipe 11 times out of 10. That being said, Chivu will not be sold to Inter. Yeah, Chivu is not going to be sold to Inter. Roma will wait for a better offer (likely from outside of Milan) and expect Chivu to be in training camp this summer. Roma wants at least double the value of the offer from Inter. So don't expect a quick resolution to this debacle.

So for everyone in the Nerazurri half of Milan, stop holding your breath. If Christian goes anywhere it's much more likely to involve Real Madrid (or Barca, who have also approached Roma) than anyone in Serie A. Roberto Carlos has signed with Fenerbahce and the LB spot is now open in Madrid, not to mention the likely movement of Cannavaro. I believe Marcelo is a LB but Real have been after Chivu since his Ajax days, even when they didn't have a spot for him. And I've said it before, the proposed deals are for .30 on the dollar and Roma will not allow that, especially to a rival. Internazionale should be docked points for their transfer offers this summer anyway. There is a difference between trying to milk all you can out of a deal and insulting a player's talent, quality and value and the intelligence of the other club's hierarchy. I have yet to see a proposed deal this summer from Inter that wouldn't be laughed off by a club's front office. Some already have.

It's now about 99% likely Chivu's tenure in Rome has closed, so let's look at the positive impact: A likely deal netting a value of 22M +. Subtract the 8m for Juan and that leaves at least 14m in value to add to the transfer budget (trust me on this, I was a math major), not including any player swaps. That makes the budget roughly 34-44m euros. More than enough to go after some big boys. I'm actually excited about this. If Chivu didn't want to sacrifice 400,00 euros to play for the Giallorossi, then he can pack his bags right now.

I know this goes against everything the English speaking press is reporting, but I trust Il Romanista. They are right almost all the time because of their connections. If I am wrong I have no problem eating my words.

Update: Goal.com is backtracking from the claims of an "imminent" deal.

"However, it is far from assured yet that Chivu will join the Nerazzurri, particularly with Roma wanting to hang on to him if they can."

Update 2: Barcelona have offered Juliano Belletti, Sylvinho and "robust" economic compensation. I don't really know how I feel about the players (they're both defenders on the wrong side of 30), but I like the fact that more teams are throwing their hat into the Chivu race. A bidding war was inevitable. I'll try to find out what the money factor is. Take that, Moratti.

The rest of it:

Alright now that that's settled, the European media apparently had nothing to write about yesterday, because they spent the day writing stories and rumours that they obvously pulled directly out of their collective arses. The Giallorossi were linked with no less than 412 players at some point yesterday, and the list is still growing. Let's run down the list real quick so we're all on the same page, and then I'll explain why media members, namely those working for goal.com, are stupid: Juan, Fred, Cicinho, Naldo, Julien Faubert (Hey, a surname!), Francesco Modesto, Per Mertesacker and Alessandro Rosina.

Juan (Bayer Leverkusen): Rumor is Juan (top pic, on the right) will be bought ASAP at a price of 8m euros to replace Chivu. Juan is not that much of a drop from Chivu and they are within a year's age, but Chivu is valued at roughly three times the Brazilian. The official dance at the Olimpico is about to be the samba. AS Roma: Selecao, Italian chapter.
Cicinho (Real Madrid): Real Madrid & Roma are talking, and with the departure of Roberto Carlos, I don't see anyway that Real wouldn't at least be feeling out a Chivu deal. There is a very good chance that Cicinho winds up in Rome around the same time Chivu departs.
Fred (Lyon): The deal is officially dead. Stop talking about it.
Naldo & Per Mertesacker (Werder Bremen): Here's where the rumors starting getting questionable at best. Both names hit the rumor mill yesterday on goal.com(I'm beginning to really hate yahoo for taking over eurosport because goal is now a 'go to' page, awful) after an "imminent" deal sending Chivu to Inter is finished. D'oh! As for the two beanpoles? My guess is the staffers at goal.com, or whatever agency first reported this, took a map of Europe, put on a blindfold and fired a dart at the map. Whatever city with a major club came closest they decided to link them with the best defender(s) as a Chivu replacement. Roma officials, when asked, vehemently denied any talks regarding the pair. Out of the two, Naldo is most likely because he can probably perform the new official dance of AS Roma: the samba. And yeah, this probably means both will be inking long term deals with Roma within the next few days.
Julien Faubert (Wine Country): Talks are still progressing and Faubert's agent said that if Roma makes a decent contract offer then he will come to the capital, if not he's off to the Prem. Talks should resume post-Chivugate.
Francesco Modesto (Reggina): Modesto is desperate to move to Rome according to the agent (ya think?), but Roma haven't made contact in a couple days. Maybe they realize with a newfound influx of coin they can step up the class of their targets? Let's hope. Though with Chivu, Defendi and Martinez all on the way out, they do need significant depth in back. Hopefully that's all this is.
Alessandro Rosina (Torino): "Roma are still interested." Quality journalism right there. Quality journalism.
Ciprian Marica (Shaktar Donetsk): I have to admit, I completely forgot that Roma had expressed great interest in the young Romanian striker/winger during the January window and beyond. Marica really impressed the Roma hierarchy while playing against them in the CL for Shaktar Donetsk. After all, Roma now likely needs a token Romanian (he's also BFF with Chivu....hmmmm). There are reports that Roma has agreed to terms with Marica, but now needs to negotiate with the Ukranians. I'm a little weary of the assumed pricetag, but Roma say a deal will be done very soon. Nothing has been mentioned yet for Roma but he was bought for 5m euros by Donetsk in '04. That's a lot of bank for a 19-year old kid who had been playing in the lowly Romanian league (my apologies, Bob). Who knows what Shaktar would ask for now. No matter the price it would probably be a cash + pipeline deal.

I quit. I quit life. I quit everything.

Mancini:
Now, as for this Mancini to Liverpool crap, again. I love Liverpool, don't get me wrong, but this strikes me as a typical EPL "we have more money than you do so we're going to come in and try to buy your best players and there's not a damn thing you can do about it because we're rich and we're in the Premiership which is like the best league ever, duhhhh" move. Now that the American owners have stuck their flag in the ground it seems as though the English newspapers assume they can link anyone with one of the Big 4 because they have beaucoup bucks. Well, there hasn't been a single newspaper article or rumor in Italia mentioning this that I know of, and especially not from Il Romanista, the almighty AS Roma source. So, no information from Italian media, the media notorious for sniffing out any possible gossip around? Sounds like a British tabloid fantasy to me. Let's call it the 'Abramovich-effect.' Mancini wants to stay, he makes a ton of coin as it is and it would cost Liverpool more than they bargained for. Slim chance.

However, while I would be very nervous about next year's results if Chivu and Mancini left, an over-the-top offer well in the 20m range would have to be perused. If they could push their potential transfer budget to over 50m euros, even after buying Juan, I'm not sure I would be so disheartened. That would enable them to buy Quagliarella, Rosina and Cicinho and still have about 15m left over (crap I'm starting to sound like a Prem fan). I know I know. I'm getting ahead of myself with the fantasy football, but selling Mancini for a large sum is not exactly worst-case scenario. Still, probably not happening.

Time to start mentally preparing for the Lithuania game. I don't know if I'll be able to watch it, and I'm not so sure that's a bad thing. But let's all pray.