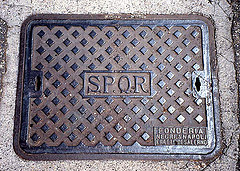 The not so sexy transfer rumors that have evolved throughout the day:

a) Yaya Toure wants to move to Inter, Barca, Roma or Lyon. Really? I'd like to pluck random members of the G14 and tell everybody I'd like to play for them too. But honestly Yaya could possibly be the perfect holding midfielder in the Spalletti system. Tall, athletic, a very good tackler and a fantastic passer, he would be able to sit back and distribute the ball all while managing defensive duties so De Rossi can push up more often. This is only a statement from an agent but I'd like to see more develop out of this. He is Pizarro x10.

b) The figure agreed on the Juan transfer, which now hangs in limbo thanks to those Spaniards, was reported at 7m euros, 1m short of the original report. Is there a minimum 15m drop in value between Chivu and Juan? Absolutely not. I really love this move, provided it goes through. The guy wants to be here and he wants to score beaucoup goals. Awesome.

d) Minor interest regarding Catania's utility player, Juan Manuel Vargas. Toss him in the pile with all the rumored targets who can play anywhere in the midfield, and some places along the back line. It seems Spalletti isn't building a squad, he's building a lottery process, in which he can just pick 11 names out of a hat and they can all play anywhere at anytime. There really isn't much detail other than Roma are interested in using him as a backup to Tonetto, the same they were hoping for with Francesco Modesto, who has seemingly fallen out of favor.

e) Christian Chivu is now speaking with Barca and has supposedly switched his interests to the west. Chew on that one, Moratti. Nothing like getting an inevitable bidding war between two Spanish rivals who have more money than the Sensi family could ever dream of. Other than keeping Christian on a discount contract, this is probably the best thing that could've happened regarding him this summer. This one will likely take weeks or months to play out, but if Roma can swing 25m out of the deal then this is a huge success. Ideal? Roma swings Deco in the deal right out from under the noses of Inter and slots him in Pizarro's old spot. Though a deal with Real netting Cicinho and/or Canna + cash would be dreamy also. Don't worry, I'll stop. But honestly, a look at possible players who could be coming back from Catalonia:

Sylvinho: Already linked. Eh, not bad but I hope it's more of a contract dump than a real attempt at knocking down Chivu's price significantly.
Belletti: Ditto.
Deco: He wants out supposedly, and has been linked to Italy, but whether or not he'd want to join Roma is a toss-up. I could see it though. Questionable due to wages.
Giuly: Please no. Is he even 5 feet tall?
Zambrotta: Unlikely, though the marriage isn't exactly flourishing. Another in the ridiculous wages group. Something tells me he and Canna will be back at Juve before long.
Edmilson: One of the more likely candidates, he wants an Italian move (specifically Milan), and would do well with his versatility in Rome. Also, another member of the Brazilian contingent. He was linked when Barca thought they actually had a shot with De Rossi. That was funny.
Motta: Ditto to Edmilson, though younger and can play on the left in midfield. Very versatile, he would be massive provided he still comes with serious bank.

Most likely: Probably two of Sylvinho, Motta & Edmilson. For me? Motta and Sylvinho (strictly to provide a body and more cash than a deal with Edmilson would provide), but anything involving Zambrotta would solve a lot of problems.

This one might actually have some legs, but don't expect anything soon.

f) Roma really needs a Vieri-type character who can get himself suspended for a late-night situation involving cocaine, prostitutes and a transsexual rodeo clown, because I'm getting bored.