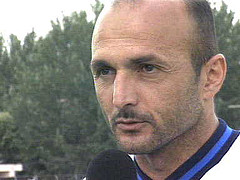 Luciano Spalletti (yeah, that's him) had a long interview on the tele today and il Romanista printed the dialogue. It wasn't exactly a sexy interview detailing the proposed summer transfers or rumors or how he thought Chivu is a selfish mercenary who is only after a large contract due to his figurative Napoleon-complex after having played next to Philippe Mexes for two years. But there were a couple of interesting points. One was regarding the 4-2-3-1 formation. He said that he had never really employed the formation at Empoli or Udinese, that he was typically using a 4-3-3 or a 4-4-2. That wasn't the interesting part, he revealed why he doesn't like to deviate from the 4-2-3-1 (which is suppposedly why Roma have turned down numerous strikers), it's not because of Totti, it's because of Perrotta. Spalletti thinks that Perrotta is the perfect trequartista (supporting striker) because of everything he can do from that position and he doesn't want to remove him from that role. I had always thought that Totti was regarded as the trequartista because of how far back he drops, usually well into the Roma half, regardless of the fact that he plays the furthest up. So this eliminates the thought of pushing Perrotta out left or in a platoon situation. Though he didn't discount the possibility of a 3-2-3-2 (please please please).

The other part directly related to the transfer market regarded his thoughts on star players. He does not want stars on his team, he wants a team full of players who know their role and don't deviate from the team concept. He pointed to the sense of cohesion brought to Milan after the departure of Sheva and how that resulted in a Champions League victory. Although Totti is larger than life in Rome, he does not want a single player to dictate the direction of the club, on or off the pitch. I commend him on this, no one is bigger than a team, but it makes me worry that he'll turn down the chance to sign players of superior quality for players who might not bring as much to the squad but fit a role. Milan lost Sheva but they still have some of the biggest names in Europe and South America. I love having players like Taddei, Tonetto and Cassetti; but they don't win you Scudetti. It's the Totti's, De Rossi's, Mexes' and Mancini's that win you championships. If this means Roma will go after Bolo Zenden, Francesco Modesto, Cristiano Doni and Claudio Bellucci instead of Rosina, Quagliarella and Suazo then I'm going to be very unhappy.

a) Julien Faubert is eliciting strong interest from Fiorentina even though he has supposedly agreed to contract terms with Roma. Unfortunately, I can easily seem him at Fiorentina, but hopefully that's more my subconscious speaking because he also wore a purple shirt at Bordeaux. The Viola envision he and Semioli as a perfect pair of wingers. Would Semioli just make a fucking decision already, he's already flip-flopped twice this week. Someone get him some Midol.

b) Ze Roberto is likely heading back to Bayern Munich after seemingly burning his bridges with them last summer and then kicking dirt on the ashes. What the hell is going on in Bavaria right now? They're becoming Real Madrid North.

c) The European U-21 Championships begin on Sunday in the Netherlands and the Azzurrini are considered favorites to take home the championship. What an addition to Italian football that would be. Maybe they should have a Calciopoli scandal every 2-3 years or so. The two Roma players participating are Gianluca Curci and Alberto Aquilani, both of whom will undoubtedly be in the starting XI against Serbia on Monday. The other two players to watch are Ricardo Montolivo, considered to be the next Totti and not without merit, of Fiorentina and Alessandro Rosina of Torino. This championship could do wonders to dictate a pricetag for Rosina, as was at one point one of Roma's top targets, and may still be. The last known offer was 9m euros, Commotto's half-ownership and a free loan of Curci, but little is known beyond that. If Rosinaldo has a tournament like Quagliarella did, Roma can likely rule themselves out of the sweepstakes. Forza Italia.

d) Matteo Brighi's agent has revealed that Cagliari, Parma, Udinese, Atalanta and Espanyol are all interested in his services. His first choice is to stay with the Giallorossi in hopes of an Azzurri recall. That's right, recall. He has one cap from 5 years ago. This is the same guy who was bought by Juventus for 11m euros 3 years ago. I say give him a chance as a squad player. The list of teams after him aren't exactly Scudetto contenders but it can't hurt since he is already under contract to Rome. If it doesn't work out sell/loan him in January.

e) Spalletti and other players have said they have tried to reach Chivu but he will not answer their calls. Christian is really showing his true colors: green. He is causing an entire city and fanbase to lose more respect for him by the day.

* - By the way, I typically don't link to sites unless the story/report is written in English as this is an English website. If you want me to link Italian, French, Romanian or whatever websites then let me know.