Thinking About The Unthinkable: Behrami to Roma.

Share All sharing options for: Thinking About The Unthinkable: Behrami to Roma. 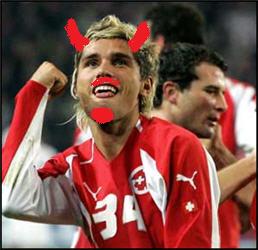 I've actually got a host of important stuff I'm hoping to get up later - important like Totti important (things are looking good right now, fingers crossed) - but I went completely slack jawed reading this moments ago and really just cannot wrap my head around it.

"I wouldn't have any problems playing in the Giallorossi shirt, in fact, if they call me I will move there straight away," Behrami told Leggo.

"I am happy here at West Ham but if the club needs to sell me then I will leave. Lazio? I know they would be annoyed if I went to Roma but I am a professional and these things happen in football."

According to his agent, Roma has made contact to express their interest because West Ham may be forced into a firesale soon with their ownership in deep, deep financial shit. And though Taddei's the least of anyone's problems, the only thing Spalletti loves more than Fancypants Pizarro is hybrid-RB/RW's. So...as unthinkable as it may be, it's not that unthinkable matters could proceed.

Behrami might be a technically good player, but you can never wash the stains of a Lazio jersey off one's soul. Personally, I'd have my new Christian Wilhelmsson, aka target of irrational hate (more rational in this case). But is it worth it to stick it to the Laziali once again? Can only imagine the hate campaign were a giallorosso to move to Lazio less than 6 months after leaving the good fellas.

And of course, this isn't a Rosi/Domizzi case, where they grew up a Roma fan, only playing for the baby blues out of necessity.

So the question becomes...

Would you take Behrami in giallorosso?
( polls)