One of Those Days

Share All sharing options for: One of Those Days 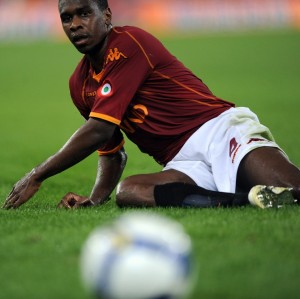 Just one of those games. Defense was garbage, yeah, but Inter got every single bounce imaginable. Goals against the run of play, two balls ricocheted in off posts and Zlatan's opener was millimeters away from the post itself. I'm not even sure he knew where the hell the goal was when he hit it, just flicked his foot out of shock. (Not willing to test that theory by watching it again, though.)

But apart from the opening stretch off the blocks, this wasn't a horrible performance. In fact, they more than held their own - especially under the circumstances - and even looked the better team at times. Roma's Achilles heel was simply magnified that much more, and the footballing gods were very unkind. I think Spalletti will say more of the same, but if this is isolated as a building block, it's got some positive signs.

So don't start with this "season's over" garbage just yet. They were 11 behind last February and fought it until the last day of the season. 08-09 is off to a very rough start, but there were plenty of silver linings to be had today.

And I think we can sum it up by saying Roma's season is just beginning while everyone else is in match form. The execution is not there, many players are still lacking form/coming off injury, and blunders which you'd expect in August, not October, are finding their way to the surface. That simple, that unfortunate.

Some notes before moving on to Chelsea and leaving this in the bin where it belongs: the one-offs.

• Not quite sure why Aquilani played. The flu obviously caught up with him. But then again, I'm not sure Spalletti had any other choice.

• Totti was magical. But it's clear not having him isn't the problem. Much more than that. Still, what he brings to the team is simply irreplaceable. Same could be said were he on any other team on the planet.

• Loria sucks. The best thing Ferrari did last year was get injured consistently so he didn't have to play. Loria could think about doing likewise. How the fuck he bilked Roma & Juve to duke it out for him I'll never know. Very unfortunately living up to his billing as the poor man's Materazzi. Then again, there's no way to know they would've actually needed him this much at this point.

• This game was lost in Tuscany. Your only two healthy/game ready/competent defenders getting suspended, forcing a lineup with no real defensively consistent defenders at the moment, ruined this game. It was lost before it began.