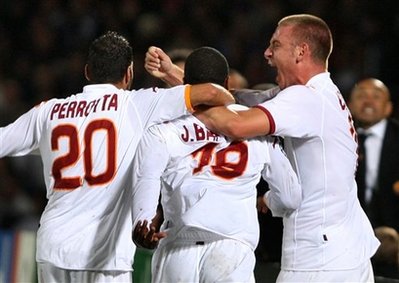 Like a fine wine they became better as the time passed, only peaking at the last possible moment. Alright, now that's over, a little less cheese with your wine analogies. (I can't stop. I'm sorry.) But seriously, a tale of two teams. When Julio came on for Mssr. Menez, it was as though two subs were made: Julio & a twelfth player named "vigor" - who also brought his half-sister named "Bordeaux's fatigue". Yes, it was nice to be facing 10 - a deserved 10 at that - even if Roma tends to make a group of 10 seem as if they're 20. But I think there was a bit more to this game than just "better team hammers 10 man team in monsoon". They were shite for 60 minutes, looking as though they'd rather be having a prostate exam from a doctor with the finesse of Marco Materazzi, and then something happened. It all clicked.

Would it have happened without the red? If you've watched this team for, oh, more than two weeks, you'll know they play much better against 11 than 10. Were it not for Henrique, this would've been ugly for the French.

MOTM? Hardly a question. Man of the match, man of the hour, Julio Baptista. The free kick which he won followed by the sublime finish; then the steaming run off the ball which had even Simone blushing, and the finish which Simone probably would've inexplicably booted over the bar. It was, in essence, everything we'd hoped for from him. Not so much his actual play, but his impact. They needed someone to make a difference, and he certainly did just that.

But it wasn't a particularly wonderful 90 minutes; if anything a pitiful 60 followed by a euphoric 30. There's still much to work to do, and it further proves how much the ball bounced in the Roman direction over the weekend. They need to build on this confidence booster and they need to keep people @#$%ing healthy so they can form some sort of team-wide chemistry. But it was so damn glorious because it was familiar. It was dramatic. It was mind bending. It was heart-wrenching. It was joyful. It was infuriating. It was bliss. It was, in a word, Roma.

Doni: Gourcuff goal wasn't his fault, just a fantastic ball. Had little else to do. 6.5

Cicinho: Decent. I think. Today's Guy Who Escapes Me. 6.5

Mexes: His physical play is top notch and there is no question the Roman back is an entirely different animal when he's on the pitch. A rock. 7.5

GOMR: Looked almost uneasy at times and was outshone by his French partner in crime. Didn't score a goal, which is completely inexcusable these days. 6.5

Riise: John's performance mimicked the team's: poor in the first half, much improved towards the end of the game. Really liked his attacking runs when he got a bit frisky towards the end, and that free kick was damn close to finding some net. It's a stepping stone. 6.5

DDR: Not his best, but given that he was questionable leading up to the game, one can hardly blame him. 6.5

Aquilani: Not his best, either. Think it was the hair. 6

Taddei: That assist to Julio was fantastic. Had a few moments of quality, and like half the team, did his thing as the game wore on. An in-form Rodrigo enables this team to do so much more. 7

Perrotta: Like the entire midfield, not his game. They were too easily torn apart at times. 6

Menez: Hardly by surprise had at least 7 men on him every time he touched the ball, Bordeaux obviously knew not to give him an inch of space from his years in Ligue 1. His effectiveness was limited and his substitution enabled Mirko to move out wide. 6.5

Vucinic: Center forward in this system is not his thing, but what's more is it's becoming decreasingly so. Obviously with Francesco out some tactics have to change, but Mirko used to drop back and collect more balls Totti-style last year than he does currently. Now it's a long ball over the top 90% of the time (not necessarily his fault and something which Spal needs to talk to the back line about), half of which he's offside. Out wide he's an entirely different player, able to control his and the ball's fate. Easy solution: get Francesco healthy and all will be glorious. 7

La Bestia: What can you say? He's arrived. 8

Okaka: Should've had one, missed a Simone-esque sitter, and like Vuci is getting caught offside a lot, but he brings an incredibly dangerous threat to the side and even as a decoy, can't go unmentioned. 7

Brighi: Custodial duties. Though at one point late in the first half I kept thinking "Matteo Brighi is going to earn himself a starting spot if this keeps up". Perhaps the phenom that was at Juve will arrive, just as an underappreciated late bloomer. N/A

The ship hasn't been righted by a long shot, but if they can get past Siena with three points and head into the int'l break with a three win streak underneath their belt, I'll feel infinitely more comfortable than I did one week ago. They're on the right track.