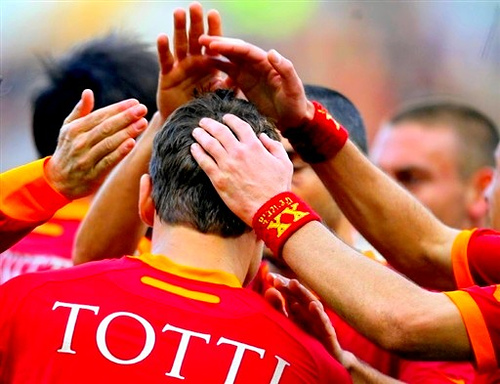 I'm not concerned with Chelsea. They're not a worry because to worry about them, one would have to be able to look past all that cripples the Giallorossi at the moment. They're out of form, devoid of confidence and desperate for medical cures, even contemplating a second opinion from that guy running an orthopedic clinic out of his Lancia Delta underneath the bridge. One of the few silver linings from the weekend was they left the pitch without succumbing to injury, leaving only their pride wounded. Today? The injury crisis returns. Or maybe it never left, simply fell asleep drunk behind the garbage cans out back. The grounds of Stamford Bridge have awoken the dormant curse, and it's back to wondering not how well they'll play, but whether or not they'll have to thieve some bodies from Madame Tussauds to fill in the gaps. (Can't possibly worry about such trivial details as heartbeats at the moment.)

Pop your Prozac, ladies and gents, because here we go yet again:

Doni: Blow to his right knee in training today which forced him to stop. Game-time decision for tomorrow. If no Doni, Artur makes his Roman debut at Stamford Bridge. Oh la de fucking da. (I think he plays.)

Cassetti: Thigh. Out. But we knew that.

Tonetto: "Pain". Questionable, although feel free to just say out. Unless Riise pulls a reprise of last year, there's no way in hell he plays.

So even if some of these lads do play, they'll be at far less than 100%. And what do most of them bring to the table? Defense. What has crippled Roma so dearly recently? Defense. How splendid.

And then there's Totti. I don't think anyone is under the illusion that he's even remotely close to fitness, but we saw this weekend how undeniably magnificent Francesco is at merely 50%. He plays, he's probably the best player on the pitch whatever his fitness levels. The man's simply a genius.

Now if you'd like to worry about the Blues...they are, according to many, the best team in the world right now.

B is essentially locally trained players (2 years) between the ages of 17 & 21.

We know the depressing story of our fair Giallorossi, so onto Chelsea:

Deco will be available, but may not start.

Despite the injuries, that's the best starting XI we've seen since last winter. Of course, names on a sheet and bunch of hobbled athletes on a pitch are two entirely different matters, but it's something.

Haven't watched a moment of Chelsea since the Champions League final, and even then I was only glancing at the tube sporadically. So apparently I've missed a couple things, like a complete footballing revolution. Thus, I haven't the slightest clue what's going on in West London. The good internets tell me they've been playing a 4-5-1 of sorts with lots and lots of success (27 goals in 11 or something). So that's nice. With their injuries, I'd guess their lineup won't look all that dissimilar to the one which put up at 5 spot against Middleborough this weekend:

Maybe a Deco/Belletti swap, Cech for Cudicini (doubtful) and Kalou for Cole. That's all I've got at the moment. Whatever it is, it'll be good for them, bad for Roma.

This one isn't about points, nor is it about matchups. It's about the peripherals which will benefit the Giallorossi in the short term for the long term. A win will be an arduous uphill battle and a draw not much less. Their basic want is simply to create more and more building blocks. Once that's achieved, they can start worrying about results against a team like Chelsea; leaving us now with mere hopes. We hope...

...that they show strong mental character for 90 minutes.

...that they improve on the spots of good form from the weekend.

...that they instill a modicum of confidence in themselves for the trip to Udine.

...that they become more identifiable as the Roman XI we knew, not the underperforming individuals we currently see.

...that the porous, hobbled defense plugs the holes and rights itself.

...that Good Doni shows up.

...that the attack shows some signs of life in the final third from someone not named Francesco Totti.

...that those same signs beget a little thing called "execution".

...and that all of this comes together so that at some point today we can stop hoping and start believing.

Streaming: Here or PPV at uefa.com.
Liveblog: Believe so.