There's No Such Thing As A Good Loss

Share All sharing options for: There's No Such Thing As A Good Loss 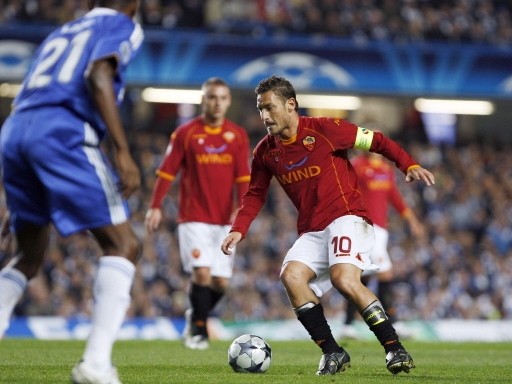 But that was a good loss. They showed something we haven't seen in the longest of long times: cohesion and tactical purpose. They went in with a plan and executed to perfection in their own end - though I'm not naive enough to think a match with Drogba would parallel one with The Sulk - only to be felled by a corner. A corner which saw the ball knocked in off a post via the noggin of a defender who's more likely to cure cancer midmatch than he is to score a goal for a team now known for its quick floor action and ability to score at will. As ever, when luck goes missing, she can't even be bothered to come up for a puff of air.

I found few negatives, unless you'd like to count the lack of attacking initiative, especially in the second half. Normally I'm not a fan of the sit-back-and-pray-for-a-counter approach, especially when flawed, but under these circumstances, I applaud the approach. Chelsea haven't lost at home in something like 75 games and more than two-thirds of those results have been victories. Stamford Bridge is simply not a place to play fast and loose with a defense which has shown the stability of a three-legged chair. Especially not now, not in the midst of the Scolari revolution.

And thus, having limited the damages, they take away so much from this game. Most importantly, for the first time all year they looked like a team. Not eleven players meandering aimlessly around the pitch, but a real, honest-to-Buddha calcio team defined by tactical cohesion. When a hole was opened, someone else plugged it. When a mistake was made, someone else picked up the slack. In terms of pure style, it's a far cry from the high-flying Spalletti-inspired circus acts of yore, but it, at the core, the first time Roma moved as Roma should: with tactical purpose and an actual feel for the game.

Going forward we could certainly want for more, but it was all about baby steps, and everyone knows that to build a solid base, one needs defense first, second, third and fourth. They did that today in spades, nullifying ninety-nine percent of Chelsea's chances in the final third. It's fairly telling that all but one of Chelsea's best chances came on set-pieces, including the goal. Simply the result of doing what they had to do. Short of brilliant, but a massive, massive improvement. (Not forgetting, of course, what the inclusion of Philippe Mexes means to this team, along the contributions of Matteo Brighi.)

Leaving London tonight they'll rue the missed point and will need to add a dash of attacking to the stew for the weekend, but they have no reason to hang their heads on that plane. For the first time in quite awhile, there's a break in the clouds. Who knew such a thing would come in England.

“We must accept the result, but also be clear-headed enough to see that we are on the right track and did well tonight.”

“Considering what the side did tonight, I don't see why we can't get the points against Chelsea in the second leg."

“If we maintain this team spirit and of course get some players back, as we keep picking up injuries all over the place, then we can improve our position in the table.”

“The team put the effort in tonight and when we really want things, we often get them. This performance will be of help to us in the near future and show the way.

“A side accustomed to winning with entertaining ball-to-feet play that then finds itself in this situation will undoubtedly take time to adjust. It's not so easy for them to get into the tough, battling attitude of other teams.

“Hopefully through performances like this we can learn and increase the belief we are capable of this.”

Doni: Forced to make only one very good save (one more than Cech), and the goal was out of his hands. A solid game, but hardly tested. 7

Cicinho: What the fuck was that? This cat can defend? Wasn't tested nearly as much as Riise, though. 7.5

Mexes: How cruel. How selfishly cruel. To put up such a performance while in the midst of a domestic suspension. The Roman defense in an entirely different monster when he's on the prowl. 8

GOMR: Always there, always ready. A solid showing in the back, just what this club needed. 7

Riise: Max will be the first team LB when he returns, but John was better than expected today, aided immensely by the constant help defending from Brighi and the fact that he knows Chelsea quite well (though not Bosingwa and not Scolari's Chelsea). 6.5

DDR: The trio of Daniele, Matteo and Alberto were simply superb, absolutely superb, at pushing all oncoming Chelsea attacks to the wing. Daniele was even more of a defensive mid-cum-central back throughout the entire game, shielding the back from initial harm. More of the same. 7

Brighi: Though the injuries to David and Alberto may nullify any need for debate, he must start against Udinese and he must start until he proves this has all been a fluke. Matteo's been the deciding factor when it comes to winning the battles in midfield this year and, outside of His Tottiness, consistently perhaps Roma's best player. His kit looked like a rugby edition by the end of the game, his tireless work and harassment doing as much damage to the Chelsea attack as his shorts. 7.5

Vucinic: I can't quite remember Mirko playing that poorly, especially in the second half, and with Boswinga making sweet love to the Roman corner flag all night long. Obviously he'd be more suited to The Roman Clusterfuck, but he's too gifted not to have been more effective against the defender who, at times, was Chelsea's premier attacking lane. 5.5

Aquilani: I think Alberto playing in front of, or with under circumstances, DDR & Brighi is the way going forward right now (provided he's alright, no word yet). 7

Taddei: Gave nothing going forward but he and Cicinho essentially nullified that Chelsea left wing - though Malouda & Bridge is hardly an insurmountable task. 6.5

Totti: 90 minutes, ladies and gents. 90 minutes. It's been a long, long time coming.

Though he's obviously out of fitness - though he did play the 90, it wasn't easy and it wasn't a consistent 90 - his moments of magic can transcend this team. As ever, the man's a genius. 7.5

Subs: All largely negligible. And I'm guessing the last person Spalletti wanted to bring in was Simone.

Tifosi: Blindfolded, one would've thought this game was played at the Stadio Olimpico. The echoing chords of Roma, Roma, Roma was something to behold. 8

And with that, we can finally look forward to the weekend. They're on their way.