The Traveling Circus of Damage Control

Share All sharing options for: The Traveling Circus of Damage Control 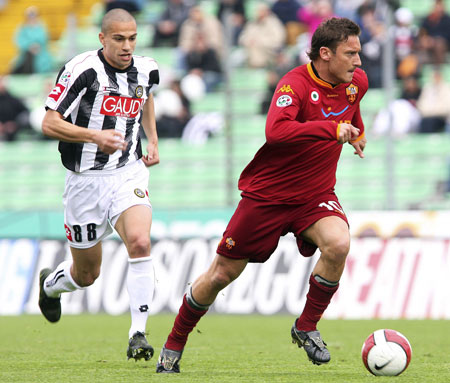 Normally, this one would be circled several times on the calendar, featuring a cloud of hearts and stars and rainbows and butterflies. It's an exciting game for Romans, Zebrette and neutrals alike. That is, it was.

Part as an exercise in damage control, part as necessity, this one is going to be far from the free-flowing, circus act we've come to hope and expect in the not-too-distant past. It's going to be hard-fought, gritty, and more resembling the trip to London than last year's trip to Udine. The Zebras are obviously a team which thrives in open spaces and capitalizing on the opposition's mistakes, neither of which Roma can afford to offer up. This team that was last year up-and-coming has arrived.

But they're not untouchable, or anything remotely close. Their midweek performance against a terribly terrible Tottenham side down to 10 men for over a half hour was good, just probably not as good as it should have been. Thus a good team, especially one with players and coach to match or surpass Marino's Zebrette, can beat them. Problem being, of course, Roma ain't very good right now. They've shown improvements, and that was a masterclass defensive showing midweek, but they've yet to put it all together.

So they'll simply have to build off that midweek showing - putting it all together would be a near impossible summit at this point - because this isn't going to be a very technically pretty side. Unless Spal starts Pizarro - I have no idea how he can with David not having played since Sept 13th, no matter large his love stick for all things Chilean has grown - the back up is going to look something like this:

or if Totti can't go, Vucinic up top with Menez on the wing.

Taddei has to start because Di Natale - he'll switch sides on occasion but Pepe's made the right his own - would eat the galloping Frenchman alive for 90 plus minutes in the event of a Vucinic-Perrotta-Menez attacking line. And if Cicinho is going to make any contribution whatsoever, it's gotta be Rodrigo.

Actually, I wouldn't mind seeing Mirko on the bench in favor of Menez for a few reasons:

i. Mirko hasn't been wonderful as of late.
ii. Menez can run like a Kenyan, and I'd love to see Pepe having second thought of getting too forward when Udinese's in possession. Simone can catch Mirko from wherever he likes, but Menez can make those flanks his bitch.
iii. Strongly doubt Totti is going to play 90, if he starts. Ready-made sub.

So while I'm not sure Spalletti will head out of the tunnel in Romanaccio mode (stole that from Vin), those coming out for a classic Roman circus act will probably be left wanting more. And at this point, it's for the best. They can worry about style when substance returns.

Pizarro: I see no way around starting him on the pine. Really don't. Brighi has, when playing, been one of Roma's most consistent performers this year. Gladly sacrifice some aesthetics for a win, and as much as he may love Fancypants, TGIP undoubtedly feels the same.

Out: Cassetti, Baptista, Aquilani. Aquilani we know, Cassetti will randomly show back up some day. As far as Baptista goes, I don't quite care what his agent says. Unless this guy's the real life inspiration behind House, to me he's utterly useless. If Julio's good for Samp, wonderful. Hold him out. If he's good, I want him very good. If he's very good, I want him flipping brilliant. If he's flipping brilliant, I want him to the point medical schools across the globe throw out their textbooks and start studying him. An ounce of prevention is worth a pound of cure, and this rushing injured players back to make weight as others drop off like we're heading towards the climax of a Michael Crichton novel is about as cool as bird flu. Enough already. Put on the kid gloves, throw 'em in the nursery and don't take 'em out until Rosella's good and dry. If she can't open up her checkbook, she can at least open up her blouse and nurse these fuckers to health. I'm done.

Really hoping Max gets a run.

Riise: Should be playing about as much as the last ginger-haired leftback (that's Antunes for the color blind in the crowd) until he has any clue how to play in the system.
Tonetto: About as matchfit as Carlo Zampa right now.
Cicinho: Used up his quota of tackles for the year in London.

This should be fun.

Roma v The Streak: The last time Roma went 270 minutes without scoring a goal....November 23, 2004. That's not good. But there's good news. They conceded 6 in those 270, as they have in the last three. The last scoreless fixture? European away (Dynamo Kyiv). Then in the minutes between 270-360, they scored 4. Against a team in zebra stripes away (Siena). Game after getting off the schneid*? Sampdoria at the Olimpico.

Roma v Lady Luck: No, they haven't been spectacular. But nary a bounce has gone their way since perhaps the Atalanta match, and it's about damn time. If Udinese puts one in off the woodwork this weekend, I might break down William Foster style on the spot. Hopefully Pepe's goal on Thursday used up their quota of woodwork help for the near future. (Don't think I'm not frightened it's Sunday and thus starts a new week, if that's how LL runs.)

Roma v Confidence: It's on the up after the trip to London, and the absolute last thing they can afford here is another mental letdown. No slips, because if so they're destined for a vicious downward spiral. A result is extremely important, but slightly less than keeping momentum heading in the right direction.

Cicinho's due for a defensive lapse after pulling Wednesday out of his arse, and with Mr. Christmas on the other side, he'll be just the guy to capitalize. But I think Roma will have enough to break the goalless streak and get at least a point.

A new rendition of Roma Roma Roma to hopefully swing the luck, certainly one of the best you'll ever hear.