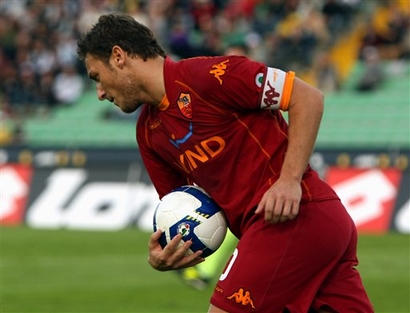 A recap and player ratings are pointless: more of the same. Some observations, notes, etc.

• The refereeing was abysmal in both ends, but it was decisive for Udinese, whereas for Roma it became incidental - not unlike, of course, every other 50/50 situation of the entire season. No doubt that first peno changed the shape of the game, and had the penalties which were which actually weren't been swapped, the outcome of this game may have changed. Forcing Udinese's opposition forward is about the greatest gift they can be given, and they grabbed those gifts off their silver platters assuredly. That said, Roma didn't deserve this one. So...eh.

• However, that "dive" which was actually a "foul in the six yard box"? Yeah, got Mirko suspended for Samp. Because Roma's just bustling with fully-fit bodies right now. Awesome. Big thanks, Saccani. Way to fuck up two games. (Not that Mirko's form warrants a second fuck up - simply for guilt purposes should he drop by.)

• Credit where credit is due, Udinese took advantage of the opportunities they were handed. The penalty was an early Christmas gift for, who else, Mr. Christmas; the Pepe goal a combined blunder between Loria & Doni; and the Di Natale clinical counter was simply exploiting the lack of experience of someone who made his positional debut at halftime of a league game - against a team which murders offside traps and lives off of counters no less. Yeah, Roma & the ref offered a generous helping hand, but they also didn't muck up their chances.

• When Roma finally gathered even a hint of confidence and composure, and stopped skying balls over the bar, Handanovic really put in a clinic on momentum control with those late game saves. I don't doubt for a moment a second goal within the last 10+ could've lead to points. Di Natale had the brace, thus winning the majority of plaudits, but Samir probably deserves MOTM.

• And kudos to Pasquale Marino for starting Floro Flores over Fab Quags. FQ's good, but AFF is a lot better than given credit for and his speed against a slow midfield and central pairing was a handful and a half. There's a reason Marino's one of the top rising minds in football, and that's evidence enough.

• They don't miss Mancini, because Mirko has been, at least recently, providing the same contributions as Amantino last year (read: none). No, who they miss is, gasp, Giuly. A veteran injection of knowledge, pace against weary legs, and goalscoring ability off the bench late in the game. Ludovicious was, on many occasions, the perfect sub; a gamechanger. Great teams have great role players, and perhaps Menez isn't quite ready to be that 20-minute gamechanger. I suppose we'll have to wait until January to see who's on the list (were he available, I'd be ready to say David Di Michele's shirt is already being printed, but alas he's not). Not that this is the whole, or even a large part, of the problem (ditto for the mercato as a whole), nor is it The Solution, but it'd help.

• While Menez may not be a supersub just yet, he's gotta start against Samp, whatever the formation or tactic - and I doubt there will even be a second thought with Mirko on the pine. He drips dynamic qualities and though his execution can leave a bit to be desired at times, he creates chances others haven't been lately. The present clearly isn't working, why not give the future a go?

• Dreaming of a GOMR-Mexes-Juan-Tonetto back line. Christmas, perhaps?

• There was no link to the attack, something which could've been avoided in the first half with a fully fit Pizarro or Aquilani. Brighi & Perrotta do a lot of things, but their technical qualities aren't exactly top drawer. Second half was an improvement, no great shock why. Even the smallest of fractures can be magnified under the right circumstances, and this was certainly one of those occasions.

• DDR had a really tough game, and I think it was the Gamberini-inspired fauxhawk. As good an explanation as any.

• Love Brighi, does a lot of things, but his passing isn't even in the same galaxy with either David or Alberto. His defensive contributions are lessened when going up against a team that loves the over-the-top counter, too. Wasn't his game to shine.

• Simone Loria has had perhaps the biggest drop off of anyone in history, because he wasn't bad last year. Just the opposite, actually (which is how he managed to con Roma and Juve into fighting for his signature). But right now, I don't see how he can play again in the near future. He's good for at least a goal-gifting blunder a game, and this team can't afford that. They're going to have to hit the market hard for a reinforcement in the winter, unless Andreolli is deemed ready (doubtful). Til then, maybe it's DDR on the prowl at 4th CB - this time with a bit more of a warning than being informed coming out of the tunnel at halftime.

• If things don't turn around in the next two games - just Samp & Juve, no worries - I'm getting increasingly worried Spalletti will sacrifice himself. Which, at this point, would be just past of disastrous. There isn't a coach available who could assist in both the short and long term the way Spalletti still can right now. I hope "switching up methods" is the only change that's needed - along with returning bodies - and I suspect it will be. Especially if those methods spill over to the training pitch, preventing training sessions from turning into triathlons, thus lessening the injuries.

Now simply hope for a repeat of Sampdoria's trip to the Olimpico last year, when Francesco truly returned.