Share All sharing options for: Cassano Returns To Chaos 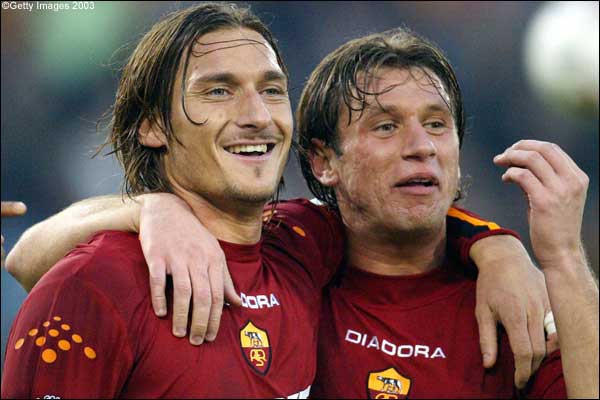 UPDATE: Game postponed due to the falling of the heavens. Makeup date to be announced.

How fitting that Cassano's first trip back to the Olimpico should be in the midst of chaos, confusion, and instability. Sounds an awful lot like...everything he brought to the table during his final days in Rome.

With the current situation, all the nostalgia and anticipation of "What will Francesco say? Will he acknowledge him? Will he punch Antonio in the face and then defecate on his forehead?" will have to be left for another day, as Antonio is merely another dangerous attacker coming to enjoy a 90 minute run against a break-not-bend defense at the moment and a keeper who's forgotten his FocusFactor yet again (GoogleAd alert). There's no time for old friends, nor new foes. Time to focus on the Romans who will be taking the pitch to get out of this disastrous funk. And the Romans are...

...who the fuck knows. Luciano's going to shape things up a bit, so he might attempt to find some working width a bit and run out a Conte-Menez partnership on the flanks - not quite something I'm opposed to at the moment (desperate times, and that). Or maybe Prade will finally get that debut at leftback he's been holding his breath for all these years. Or maybe camp counselor Rosella will show up on the pine with a glare reminiscent of Medusa and a tan reminiscent of a week old rotisserie chicken. Doesn't really matter what's puts out there, we're well past the point of being picky, it just has to work.

But we can bet on two inclusions, both of which are desperately needed and could be enough to ease the trembling: David Pizarro and Jeremy Menez. Fancypants isn't exactly a fan favorite in this household - nor is he a favorite with my cardiologist - but they desperately need someone who can a) link from the midfield to the attack, and b) create that final pass. David gets the ball rolling, and they need any chances they can get right now. Which is where Menez comes in: Jeremy seems to be one of the very few players capable of consistently creating chances at the moment - His Holiness aside. Menez's speed, creativity, vision and overall dynamic play will be a welcome addition with zero assistance coming from the wings in recent times.

Then there's the backline. Rumor is Juan will play; if not, how do we feel about Cassano in a 1v1 situation with Simone Gloria? Exactly. I presume DDR has been fervently learning CB the last two days. As long as its not Gloria, it's alright by me.

Luckily for Roma, Sampdoria is also enjoying a dismal start to the year. Unluckily, they seem to think the last two games - wins against Bologna and Partizan Belgrade - have put the Blucerchiati universe back in order. May be true, may not. What I do know is I'd rather an opponent showing up at the Fiumicino straightlining Prozac, not under the spell of confidence. Hopefully a pissed and hungry giallorosso squad will come out strong - not just firing, but executing - and quickly eradicate any sense of confidence or momentum which may have traveled along from Genoa.

And again with the prayer junk.

Baptista: Out, of course. Udinese my ass.

Cassetti: Still out, and I'm not sure people realize just how much this team misses him.

Aquilani: Out for his yearly month-long pilgrimage to the Trigoria medical wing.

Juan: Still suffering from the same injury, doesn't really have a choice, will have to play...which should rule him out for Juventus.

Vucinic: Suspended due to accumulation after his "dive", but considering his current form, may not be all that bad of a thing. I gather Menez was going to get a start against Samp regardless.

Mexes: Still suspended for being mean to the wittle weferee.

A revolution may or may not be in order; what it definitely won't be is ready in two days. If there are some tactical overhauls to be made, they won't be done overnight. Or two, for that matter.

I'd say this lineup is a pretty safe bet - until, that is, Juan goes down at the pregame buffet table when he slips on some spilt milk. And I've got an esepcially good feeling about Mssr. Menez for this one.

Roma v Cassano: This one's pretty self-explanatory, particularly for those who've been a fan for more than two years.

Sampdoria v Cassano: This one's also self-explanatory, as an emotionally charged Cassano can be extraordinarily volatile and destructive. Normally TGIP's boys going a man up is less than favorable, but exceptions can be made, particularly if it's Talentino.

Roma v Roma: Any Cassano effects aside, this is the only matchup worth talking about until they can find their feet. A battle within themselves.

Useless at this point.

Score: There will be one.
Scorers: An Italian will score.
MOTM: Somebody not named Antonio Cassano.
Cassano Red Card: 57th.