Share All sharing options for: Roma 1 - Cicinho 1 & Other Melancholy News 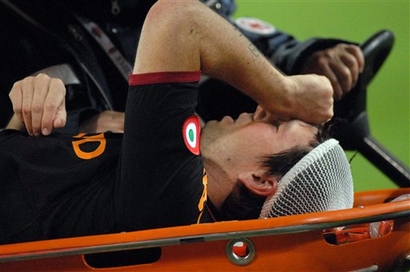 That couldn't have gone worse this side of a loss. Not only did Cicinho's ode to Henrik Larsson hand Bologna Roma's points, but Spalletti was handcuffed by two injuries to key players. Not that they needed to make any substitutions (though late game changes would've looked a lot different), but losing your keeper and best defender in the course of a game, and a week before The Derby, after such a crippling injury crisis seemed to be dissipating sucks. It sucks ass. Big time. Sucks. Yeah.

What else do you say? Bolgona defended pretty well, but at the end of the day the points belonged to Roma. Roma v Roma, once again. Nothing else to say anymore.

I can't help but laugh. When it seems to let up, it's merely the eye of the storm.

And you've got to feel pretty bad for Artur too. Believe that's the first official shot on goal he was graciously gifted as a Roman keeper. Agonizing.

So, given this late game development, here's the tactical lineup Spalletti should be unleashing for Lazio:

• Mirko should only play in the Champions League and against top of the table teams. The guy mirrors the quality of the team he's playing. How do you go from that against Chelsea to that against Bologna? Ack.

• Quite nice to see Francesco get a goal on his 400th Serie A appearance. A result would've been nicer.

• This game was aching for Jeremy Menez. Disappointing the two injuries prevented his participation.

• Let's also not forget we can hang the Doni injury on Cicinho, whatever that was (2:10 or so). He's on borrowed time as it is - could even be sacrificed in January, if he truly does want to go back to Brazil.

* - Also, Cicinho broke my modem. 30 seconds after his OG, it died for good. God I hate him right now.

“When Alberto Aquilani and Julio Baptista return, we can go back to our old system.” - The Poobah

Considering 'Berto will be exiting stage spa treatments in June or thereabouts, there's little to discuss. But for the sake of argument, here's the list of players currently deserving of automatic inclusion if/when the 4-2-3-1 returns:

'Bout it. Everything else is up for grabs. So when you add another central mid and a treq/forward to the equation...you see where this is going. There's nothing coming from width, a place Roma used to own...

...which makes this Menez to Fiorentina on loan in return for a loan of Giampaolo Pazzini after Roma swoops for Stefano Guberti in January a complete farce. Never happening. Number one, Menez will cost more than they received from Inter for one pouty Brazilian (others seem to conveniently forget this when critiquing Roma's "need" to sell their assets to go bargain shopping). They aren't dumping him after what has a been a far from disappointing opening to the season. He's proven that he doesn't need a loan to be "ready" - he's simply not that far off. Number two, Pazzini ain't the answer yet. He'd be a nice chip for the future, but he's not the now in Serie A. Three, how would you explain a kid who has been playing B-level football replacing Roma's most dynamic attacker - one who has been called the next Zizou for fuck's sake - not named His Tottiness halfway through the year in a system which isn't known to be a quick learn?

Garbage. Though the Guberti pickup - CR3.5 of Serie B, remember - could happen, either in January or in June, when his contract with Ascoli is up (another in the "I'd walk to Rome for a contract" legion), as he's been on the radar for a while yet.

Not that the source has any established credibility. Just to put the kibosh on matters before Gazzetta goes digging when the well dries up tomorrow. Speaking of...

Journalista #1: Nothing to write about today.

J2: A full-throttle vacuum of a midfielder.

J1: Which team outside The Almighty Prem isn't doing as well as anticipated this year?

J1: Hey, Daniele De Rossi! He's definitely got no ties to that team and will surely want to eschew life in Rome for an English pay packet and Earl Grey and a yellow slicker.

And voila, a rumor is born.

Alberto: Strong doubt for Lazio, of course. And with another week off before Lecce, I'd peg his chances at featuring this weekend at -12%.

Pizarro: Suspended. So they'll be looking to get some technical qualities from the midfield via Matteo Brighi. Sweet.

Doni: Between the sticks wearing the lunchlady netting he's borrowed from Simone Gloria.

Cassetti: Holy shit he might play. Praise the good heavens. Not soon enough to start, however. Still, TGIP has bemoaned his loss multiple times and we'll start to see why once he gets onto the pitch. (Cassetti would've launched that bad boy 37 rows deep. That's all I'm saying.)

Should things stay status quo this week, we can project the lineup for the derby as this:

Perhaps it's time to see if Pescatori is keen to release a certain someone for the weekend...

Or maybe the new #24 will suffice. He did, after all, say his reason for choosing the number was to accomplish what Marco did oh so many times...