Share All sharing options for: News Before The Orphan Slapping Goat Lovers 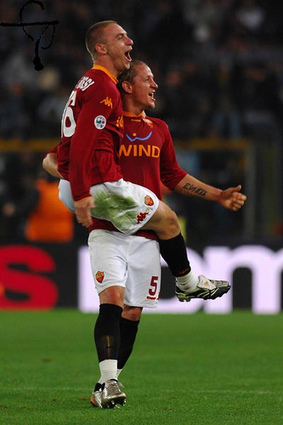 Predicting The Lineup; Or, The Rubik's Cube.

Did everyone enjoy their minor cardiac arrest this morning? I know I did. There's nothing like stumbling in at 2pm and kicking off the rest of your day with shouts of a broken arm for the only Holy Roman who has sniffed full fitness since 2007. Good stuff.

Of course, he's "okay", but "okay" for Romans these days means "it doesn't need to be amputated". It's going to be sore and were this his ankle, not wrist, a hobbled Francesco would be the only Roman rep this weekend. Actually, let's look at the status of the Holy Romans right now:

Totti: I'm not sure he's going to be 100% til the break. And I don't mean the little mini-friendly break next week. I mean Christmas break. Like 2009.
Alberto: Currently getting worked over by some masseuse named Iaquinta in Baja - and it ain't Vincenzo.
DDR: Acute Carpal Tunnel. That's not even a real thing (I think), but it works and we're sticking with it. (Bad sprain, actually. Still like mine.)

Here's my expert assessment on this situation: wtf?

Of course, an adopted Roman, Philouppe Mexes, and his 'hardened muscle' (stop snickering - although a muscle which wouldn't 'unharden' is the best reason for a sub I've ever heard...the subsequent 'medical tests' could just be a coverup to save face) will be in the lineup, after seemingly playing nice with others all week.

But another adopted Roman, Taddei (he may not be as outwardly passionate and vociferous as Philou, but he bleeds for this team), has picked up a knock and is now questionable as well. Not that his loss in and of itself is a big deal, considering his current lack of form, but add it to Pizaman's suspension and DDR's clipped wing and this midfield is looking suspect.

Plus there's the fact that Cicinho and Baptista have picked up "knocks", or whatever. Again: wtf?

But more likely is a lineup involving a fullback a winger, a la...

Or the ultra-conservative approach will be tossed in favor of something looking for more going forward, and the new #24 will get his chance to replicate the feats of the old #24. It'll also be interesting to see what happens with Cassetti and whether or not he's attained useful match fitness. If so, things get all the more confusing.

In short, wait til roughly, oh, the players come out of the tunnel on Sunday.

I'll keep this short and to the point: The lad can do some things besides being faux Batistuta, and it appears he'll become a very fine player. However, he clearly needs playing time and, assuming the gods are good and kind and decide to pay attention to the law of averages, he won't get that in Rome when bodies start coming back from the dead on a permanent basis. Spalletti is a fantastic coach in many respects, but integrating and developing youngsters isn't exactly his forte. Could even call him the anti-pedophile, if you will. Which I suppose would make him Ralph Fiennes.

Anywho, if it's going to be a youngster, it's more likely to be an established youngster whose development is in the later stages (purely as an example: Huntelaar).

I) I'm ignoring the quarterly Gazzetta shit-stirring regarding any potential sale of the team. That's all.

II) Rumors of sending Cicinho back to Brazil and bringing Behrami back to Rome from his London sabbatical, this time on the good side of town. I'm convinced Cicinho's days are numbered regardless - when Cassetti comes back his PT will plummet and he seems far from overjoyed as it stands - but I just can't see the Sensi fam bringing in an ex-Lazie as a replacement. Although having watched this summer unfold they could certainly take that PR hit and keep on chuggin'.

Cicinho? We shall see. January could be the end, especially if he continues to overexpose his defensive flank.

III) After writing that little bit above I decided to comb the YouTubes in search of some positive PR for the homeless man's Cafu and the following was the first video that popped up:

And all I could think was...when was the last time he didn't sky a shot thirty yards over the bar? The clips in this video?

IV) Stefano Guberti's agent is becoming That Drunk Girl in the bar who just won't leave you alone.

“Stefano’s contract expires in June 2009 and several Serie A clubs are interested in his services. But Roma are his first choice and joining the Giallorossi would be a dream come true for him."

Does this mean he'll be reciting weekly love poems in the press til next summer? I hope they buy him January 1 to get this over with. Persistent bastard.

V) Spalletti til the end of next year!!! Unless he's not.

Actually, is that like a one and a half year "vote of confidence" from ownership? Judging how most ownership "votes of confidence" go, how the hell did he make it to the end of the day still employed?

VI) Roma merch can be pretty few and far between, so here we go: Roma Shirts. Upstart t-shirt company providing Roman classics. I'm personally going with the Totti hoodie. Because it looks like he's pointing at me. Yeah, that's what he's doing.