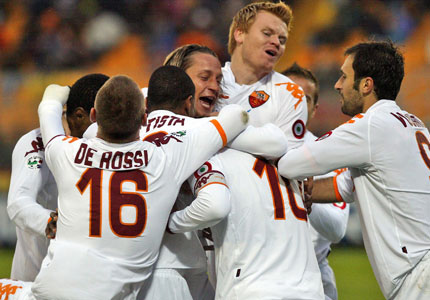 I hereby swear not to use the "b" word.

Does this mean they're ____? They might be ____. Of course, we won't know if they're truly ____ until Sunday afternoon, when full time is called at the Olimpico against the Purple People Eaters. Not that Roma can't be ____ and still lose a fixture between now and then, but if they're ____, they will have at least played good solid games and looked every bit the part of a team capable of a result. Only then can we can say they're ____.

Now, Lecce were garbage. I had seen a bit here and a bit there this season, but I couldn't figure quite how this team has managed to go through a home fixture list featuring the likes of Udinese and Milan unscathed. They aspired to piss poor, it was that bad.

But that's not to say it went unappreciated. Group hug.

The boys were good and got better as the game went along. Chelsea may have been the "turning point", but it was only their beginning of their ascent back to normalcy. Sure, beating a live opponent may be wonderful, but sometimes beating the living shite out of a tomato can does wonders for the confidence, and we all know this Roma squad can always use a little pick-me-up. Lecce is no Chelsea, yet this game may prove to be just as important in the long run.

Because in America, stats are the be-all and end-all to sporting effectiveness. 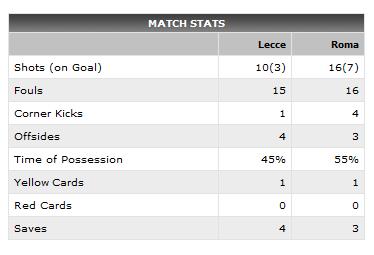 Query: When the feck did Lecce manage to take only 5 less shots than Roma? Did the ref allow them to take a post-game shootaround to pad their stats a little? Did they count the shots of hard liquor in the dressing room to dull their sorrows? I need answers.

And for being dominated, Lecce were incredibly civil. There's a theory: Lecce thought it was a friendly.

Doni: You know, I'd say he should return his game check but apparently double digit shots came his way, so what the hell do I know? 6.whothefuckknows

* - His anticipation and positioning in the first half was clinical. Absolutely clinical.

Riise: A step in the right direction, but my god did that early shot on goal speak volumes. Here's John Arne Riise with, and this is nonnegotiable regardless of your personal feelings toward him, one of the strongest boots in the game and he's putting on his skirt to finesse the ball on goal. JAR with any semblance of confidence cocks back and fires one through Benussi's torso and into the net. 6.5

* - Why is it that the entire back four and Doni play fast and loose with the ball in possession with an opposing attacker bearing down? Riise did it, but he's far from the only one on this team to take an easy out and turn it into Russian roulette with a five chambered pistol.

Taddei: Didn't skip a beat from Simone, though he did admittedly have much less to do from the last game. 7

DDR: You know things are going well when DDR's allowed to make runs into the box. 7

Brighi: He'll never be Simone when it comes to off the ball runs, but he found himself space at the top of the box numerous times and aided in creating Juan's goal. Oh, Totti's too. Just a bit. More of the same from the Roman Player of the Year thus far. And he just inked a long contract extension. Gorgeous. 8

Baptista: There's a rumor Julio was caught in the men's room with a fresh copy of the Sunday edition of Corriere dello Sport during the first half. Luckily, once he finished his business, he came back out to finish business. A quietly important game. 7

Mirko: Forgot Lecce was a "big game" for him. Responded in proper fashion, of course. Vucigol's gonna score 12 in Transylvania. 7.5

Totti: Up 3-0, game soon to conclude and he's running around like Perrotta on 2.5 eight balls, as though the result depends on it. The pass for Mirko's goal was brilliant, the cucchiaio was epic, but his commitment at the end was something else entirely. 7.5

Menez: You know, I'd say he goes down too easily, but I think a birch sapling looks at him and says, "I could take that kid". Eat a sandwich, dude. 6.5

Loria: Every time the ball bounded in his direction I covered my eyes, so I dunno. N/A

Pizaman: Rumor circulating that Spalletti had Pizarro's 6 minute cameo looped 15 times into a 90 minute game film so he could watch it late Sunday evening with the Mrs. N/A

Panucci the only missing body. Luckily he still gave us plenty of info to assess the situation:

"It's nothing serious but I could not train with the rest of the team."

Sounds like he'll be fine for Fiorentina, but one never knows at his age. He may break his hip putting in the ol' dentures Friday evening.

I) According to [insert disreputable English toilet paper here], Yossi Benayoun would be going to Manc City in return for Elano. Basically the two clubs will be swapping unhappy bench warmers. Which I'm sure everyone here is fine with, as I'm sure you've heard...

II) Lu-lu-lu Lukas Podolski wants the @#$5 out of Bavaria. Smart move on his part, though at least a year late.

Whether there is any truth behind this is irrelevant - and it matters not what the suits say - he's going to be linked regardless. Enjoy Podolski-mania until a deal is closed with whomever.

They should sign him just for the song. Roma's official music team: Antonello Venditti and those two German clowns.

III) Pablo Osvaldo's agent wants Prade to call him so they can discuss a possible move over Belgian waffles and cuddling.

IV) The ref for Cluj is Lucilio Cardoso Cortez Batista. I haven't the slightest clue who he is.

(See how I managed to avoid using "cluj" for "clue" there? Amazing, huh.)

V) For Italian speakers: A new Roman fan website called Daje Roma made its way to me today. Having only briefly skimmed it, I quite like what I see. Very thorough. So thorough it has Super Mario. Roma & Nintendo: what else does one really need?