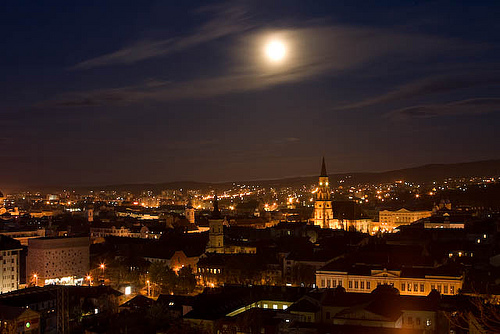 Cluj's great strength, the element of surprise, is long gone. So too is Roma's greatest weakness: the element of shittiness. It will only have been a skosh over 2 months ago, but it might as well be a skosh over two years, as Bizarro Roma is but a distant memory and Cluj will face a proper team on the pitch in Romania this evening.

Looking at the specifics of the last game, the question as to why they didn't score more goals keeps bumbling around in my mind. Cluj, that is, not Roma. Julio Culio or whatever the feck his name is may have had the game of his next seven lives, but I can say with confidence a one-legged man could score a brace against a back line featuring Cicinho, Cassetti, Panucci and Riise. Godawful is perhaps giving them too much credit. Cassetti could be a decent CB at Primavera level if he maybe had another ten years of schooling under his belt; for all the heat Riise takes now he was a shadow of his shadow at that point; and I don't think we need to go into too many details on what Cicinho brings to the defensive side of the game - mostly because there aren't any details there to discuss.

So put away the ghosts of Cluj past, repeat this mantra with me and all will be peaches and honey and butterflies and cupcakes:

Oh, and that Totti guy is healthy. He's alright.

Not, of course, that Cluj don't present a formidable obstacle or anything of the sort. They've lost two on the trot to Bordeaux, but their loss in Transylvania was on the back of an own goal and they were primed for the draw. Something which they seem to be content with these days. I've heard through the grapevine their post-Roma games have resembled watching paint dry on growing grass. The tried-and-true "little team" mentality of sitting numbers back and praying for the odd opportunity elsewhere. (I believe they employed something similar at times in Rome, but have blocked that game from my mind as any other traumatic life event I don't feel like confronting head on. You know, like any other good Catholic altar boy.) So something tells me this will resemble Bologna a bit more than Chelsea or Lecce. Wonderful news, as Cicinho has been left back in Rome...

Having seen this Roma team slowly transform itself and knowing the lads will now be taking this game just as seriously as they did the Chelsea fixture, I think it's somewhat safe to have the level of confidence before this one as we foolishly had the last time. They may not be officially ____, but they're damn close.

Panucci we know: mysterious old dude injury. Flaring arthritis, broken hip, incontinence, Viagra overdose...whatever. Should be fine when Roma plays the good host and attempts to compound the misery of the purple ones.

Cicinho's sicky and was thus left back in Rome.

Mirko is also sicky, but not as sicky as Cicinho and was able to make the trip. His status is a gametime decision, but he's seemed a scratch many times only to miraculously recover for the opening whistle. I say he goes. Me and WebMD.

Lots of scenarios going on here. The back line should be assured, as Tonetto is fit again. DDR & Brighi will be starting until one of them loses a limb - and even then it might depend on which limb. RomaNews seems to think Perrotta will link the midfield and strikers, but I'd gather he's the third option at this point. All of which depends on Mirko. If he can go, it's likely to be Baptista at the "1" and Mirko partnering Francesco. If not, that's almost assuredly Little David's spot - if he doesn't simply send Julio to the pine.

This would push Perrotta to that right central mid spot, which could also go to Taddei if Spalletti likes enough of what he saw. Doubtful, however, as Taddei went up against a poor Lecce side while Simone got stuck in against Chelsea and Lazio, both of which were wins. Think it's safe to say he's going to get a place one way or another.