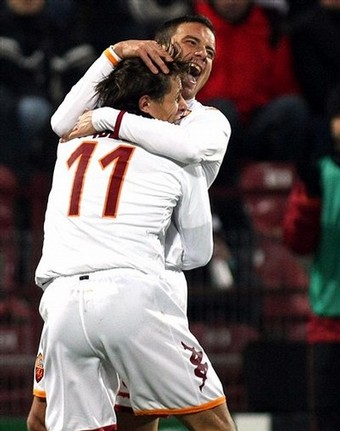 Late & brief, yes, but one's eyes can only stay open so long.

The kibosh: No, they are not ____. But what they have done is teed up the perfect opportunity to put the kibosh on the kibosh, and prove to everyone that they are truly ____ by beating a wounded Champions League departee in Fiorentina.

The game was erratic at best. Were this a team not named Cluj - Chelsea or even Fiorentina, say - three points could probably be considered a massive result. As it was, Cluj have the skills but not the complete quality which turns decent teams to good and good teams to great. Too many mistakes, too much indecision - especially the back line, which was sliced and diced so badly at times Thanksgiving turkeys were counting their lucky stars (the midfield wasn't much better either). A team with some proper strikers would've belted ball after ball into the back of the net. In fact, Cluj took 18 shots to Roma's 12, 7 went on goal to the Roman 5. Luckily, Yssouf Kone ain't a proper striker. The scoreline inspires confidence, but they'll have to be a lot better, if not as equally fortunate, this weekend.

Not, of course, that it was all bad. The showed a good deal of adjustment in the second half, Totti scored his second beauty of the week and Matteo Brighi continued his awe-inspiring run as The Saviour of Roma. Actually, let's talk Brighi. Is there a midfielder in the peninsula in a better run of form than Matteo right now? Is that even a fair question? The lad has been absolutely impeccable for the last month, and what's more is that he's showing signs of evolution. His runs into the box are becoming more frequent and timely while he, much like the rest of the squad, is figuring out how to get the best from himself within this new formation (a prolonged hat tip to The Poobah as well, of course). In the 4-2-3-1 he was sort of in-between, but this three man midfield is his bread and butter. Just a late bloomer at 27, he's becoming the star he was always predicted to be. Magical stuff from Matteo.

And another prolonged hat tip to The Poobah, who once again is extracting the absolute most from a player once perceived to be merely decent. Spalletti may have his limitations, but the man's vision is masterful.

But perhaps more importantly than Spalletti or Brighi or Totti or any tactical system for this resurgence is something we can all relate to: they look like they're having fun again, don't they? Just imagine what it'll look like when they're ____.

This isn't the first time this kid has dropped onto the grid, and it certainly won't be the last. Because I'm in lazy mode today and am eying my bed in bizarre lustful wonderment like a priest at a strip club, I'm cutting and pasting:

I think we may need legal representation just to report this rumor. His transfer between Corinthians and Lyon was a Philou-esque mess, and it appears he may have had his dirty little hands in the whole thing.

Anywho, this kid is a Phenom. PHEEEEENOOOOM. He was born to have a ball at his feet. Just like every other rumor here, I have no clue. He hasn’t played much recently due to an injury, and I can imagine a few teams are wary of him. Which could mean his price is more than acceptable, and he’d certainly be ready to come in and do all those Brazilian things they do at Roma. I don’t know, but this is the type of guy who could make you feel like an exceptional idiot in a few years if you don’t pounce now.

Rumor is Internacional wants Cicinho, but Roma doesn't want to lose any cash on their investment (and they shouldn't, he's been as advertised) and the €10m would be a little steep for Internacional. As a make-weight, it's being said the suits would take Nilmar, who is currently being flogged about anyway (Genoa and Palermo, mostly). So....a defender who can't defend for one of the most dynamic talents on the planet. Where do we sign?

Well, it's not that simple. He's in that "development" stage of his career still and his medical files make Aquilani look like the picture of health. Essentially he'd be another Menez: unconscionably talented, but relegated to vice-whomever duties from the beginning as he learns the ropes. Luckily, the 4-3-1-2 is a much easier system to grasp for a forward than the 4-2-3-1. Infinitely easier, actually. (He's versatile to boot.)

As this isn't the first time Nilmar has been linked with Roma, and we all know Cicinho wanted back to Brazil just this summer (Remember when he spurned Chelsea, Pool and Sevilla because he only wanted to go to Rome? That turned out well.), it leads one to believe there might be a hint of legitimacy here. But still, lots of questions surround this one because the sale of Cicinho would require another purchase (either another RB or a quality 3rd CB) along with Nilmar and you wonder how many changes Spalletti is willing to make mid trot. Seems unlikely, but so didn't a Menez deal last summer.

I gather the second one adds a certain amount of sex appeal, yeah?