Fiorentina: Injuries Return in the Wake of Form

Share All sharing options for: Fiorentina: Injuries Return in the Wake of Form 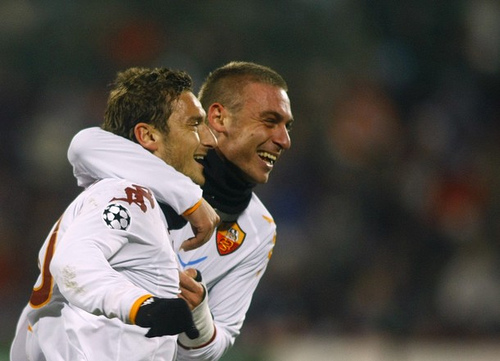 Isn't this loverly. The injuries dissipate, the form returns, and we've all been afforded the opportunity to hang our hats on that cruel, cruel bitch known as hope. Well hope struck back, as she's apt to do, and it's time to back up the ambulance because they're dropping like flies again. Christian Panucci can't find the antidote to his Viagra overdose; Max Tonetto developed frostbite from trying to prove his manhood through short-sleeves in the icy cold winds of Transylvania; David Pizarro was becoming uncomfortable with Spalletti's "home videos", thus pulled himself out of the running; and Alberto Aquilani is, well, Alberto Aquilani. (Okakachukakakakaka also, but he's not exactly an integral member at this point.) Luckily these knocks aren't critical for the Fiorentina game, but lord knows the Roman injury snowball is just around the corner. The game hasn't even begun and I'm already bracing for the postmatch injury report. Joy.

Actually, scratch that "aren't critical" part. The Roman defense was hacked open like a med student's first cadaver against Cluj, and though they probably can't look much worse (at times, it should be said), if they don't improve significantly this could get real ugly, real quick - and we all know how fragile the Roman mentality is. We at least had hoped for the unwavering solid-to-the-bone defense, overlapping runs, clinical finishing and twelve year old boy haircut of Christian Panucci this weekend, as he was Brighi before Brighi. In other words: the only thing holding this team together. Unfortunately he's gone and so isn't Tonetto, which leaves Riise, who still looks like every run out is his first junior high dance. Not exactly ideal.

But perhaps familiarity will bring about vast improvements, and the personnel will prove nearly irrelevant up against a Serie A team and Serie A tactics. Or let's hope so. (Damn, there's that word again.)

Luckily the rest of the lineup will go largely unchanged, though you can be assured Mirko will find his way into the lineup at the expense of someone (most likely Taddei). This is, after all, a big game - Mirko's domain. Plus he got his inexplicable sitter misses out of the way during his cameo against Cluj, so he should be good for at least a baker's dozen against la Viola. Which is fine enough should the defense crap themselves and offer up merely a dozen. Win's a win.

As Fiorentina go, I have no idea what to make of them. They started off the year as expected, but the month of November has been bizarre, swapping "quality of opponent" for "location of game" as the great decider. Their four Serie A games in the month have gone a little something like this:

So basically: Home form = good, away form = not so good. I think it's safe to say we're all in favor of continuing the trend, yes?

Then there's Champions League exit of this week, which has surely dampened some purple-tinted moods in the locker room. Can't quite say they were predicted to get out of the group, but five games without a win is a swift punch to the old gut. Question becomes whether the giallorosso lads can capitalize on the blood in the water. Maybe not good, because I think I once likened the lads to dolphins, not sharks, under those circumstances. Not 100% sure what dolphins do when blood is in the water, but I'd rather they mercilessly pummel some balls into the back of the net as opposed to jump up and down, look all cute and get caught in tuna traps.

But all that aside, this is The Game, and it has been since The Derby. The game where they can fully "confirm" their revival, with TGIP saying as much today:

“We have made the steps, now we need to confirm the road we have traveled.”

This is The Game where they can prove everything in the first few paragraphs is irrelevant, and that Roma is Roma, with whatever personnel via whatever methods. This is the chance to fully regain their identity. Only then will they be ____.

Think it'll be interesting to see how Spalletti plays the Mutu threat. One of Brighi and Perrotta will almost assuredly be asked to pull up the reigns just a little bit on whichever side Mutu is favoring (usually the left), as even though he's not in great form and still an epic piece of turd, he's got a lot of quality. (And Spalletti obviously gives great respect to his qualities. You know, given that he worked the entire summer around the promising but ultimately doomed Project Mutu.)

The rest seems pretty cut and dried. Just can't see Perrotta on the bench and Taddei back on DDR's side.

The bench, however, offers up a lot of questions. As far as guys who play regularly on the pine, they're down to Taddei, Cicinho and Menez. All of whom come with their own special sort of limitations (though that probably comes with being a part of the pine-ridin' crew).

What else? The return.

Streaming: Here.
Another preview: Reader John Silver (you may remember him from this) offers up a more in-depth look at the encounter at Football Italiano. Go there. Read; immerse; discuss.