Share All sharing options for: Roma 1 - Fiorentina 0: The Return. 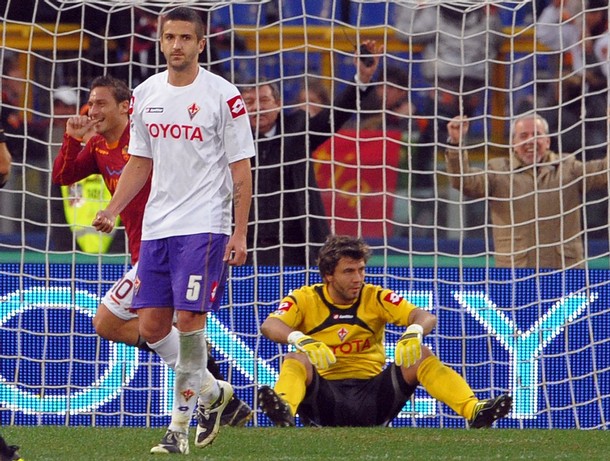 For the neutral observer, that had to be the best 1-0 Serie A game of the season thus far - perhaps even the best game altogether. Completely open end-to-end stuff from opening to closing whistles. All of which will probably take a few years off the lives of two sets of tifosi - a couple more in the case of la Viola's fans - but years we'll gladly sacrifice for the sake of a win and, for the fourth league game in a row, a clean sheet...disregarding any and all contributions from a certain Brazilian fullback. For a team which began the year bleeding goals, that's going to be just as important going forward as the actual results.

Of course, as expected, the injury bug reared its ugly head once again. Not even offering up the courtesy of waiting til the opening whistle, as Simone Perrotta was struck down in warm ups, forcing a Fiorentina mole into his place for the game. During actual, you know, game play, Marco Cassetti hobbled off just after the hour mark and Philou, whose injury looked much worse than postgame comments seem to indicate, completed the trifecta by exiting the field via cart, taking with it the collective breath of the Olimpico. All of which makes me think they may need to make a January loan move for another team's medical staff to keep up with the rapidly piling bodies (again).

Perhaps the true result, and subsequently cost, of the game can only be tallied when the extent of these injuries are fully know. They may be thriving under the 4-3-1-2, but we also must remember why it's here in the first place: there weren't enough healthy bodies to make the 4-2-3-1 work. The team, as currently constituted, is back, but they cannot afford the rash of injuries we saw earlier in the season. No one can.

While we wait, they slowly but surely climb up the table. Not forgetting, of course, that they have a game in hand at the Olimpico against the worst road team in Serie A (0-1-5, -10). The sun seems to be fully shining on Rome once again, as is meant to be.

Doni: MOTM. Without those two massive saves, this is the wrong end of a 2-1 scoreline. Nine out of ten keepers tip that Mutu free kick into the roof of the net, too, and lord knows what that could do to the ever fragile Roman mentality. As the last two fixtures have outlined, he is what he is: a keeper with world class skills and a hollowed-out grapefruit. Prone to highlight reel game altering saves and the occasional "what the fuck just happened?" softy. 8

Cassetti: Not his best game, but perhaps would've had more of an impact going forward if Taddei's feet hadn't said "herculean boot" when his brain said "finesse". And Mutu was always going to be a tough task, while the injury didn't help matters. 6.5

Juan: Not quite as smooth as his alter ego J-Smoove, but still got the job done when necessary. 6.5

Tattoo: -3.5 Giant stars neck tattoo? Really? Unless, of course, it's some astrological thing aimed at persuading Domenech into his favor. Then it's understandable.

(He doesn't seem to think his neck injury is anything worth losing sleep over, which is good.)

Riise: That was, by all accounts, his best game in the shirt. Not mistake-free, but when he did make the odd gaffe, he cleaned up his own mess. Going forward we finally got what we've been hoping for, too, in those hard-charging runs brimming with intent. The 75 yard run in the first half was joyous in itself. And the confidence was readily evident, as he snuck forward more and more with each and every positive move. The start has been rocky at best, but he can become a major, major asset to this team. 7.5 (An extra 0.5 for far surpassing expectations.)

Taddei: Fiorentina's best attacker. Seriously, were it not for lack of options, he might've been tactically subbed at the half hour mark. Made up for his errors in spades with the Totti assist, but then nearly gave one back going the other day. All in all, looked a lot like last year's Pizarro. 6.5

Brighi: Fiorentina's ball movement forced his pinballing ways to look rather ordinary, as will tend to be the case with highly technical sides (see: Udinese). His now trademark late surges into the box were somewhat held back as Fiorentina was clearly dangerous on the counter, if lacking the finishing move. But that's not to say he was poor or mediocre, even; mere workrate and presence can do wonders. Simply less readily evident than his stellar performances of the past few weeks. 6.5

Baptista: Coming into his own in the treq position. His touch will never be Totti-esque....oh, wait.

When watching the game I was 101% sure that was Francesco on the back heel to get the move going simply because that's right up his alley. But in fact it was La Bestia on the sublime touch kicking off the festivities. Then there's that ball which rattled the bar and would've sent the entire Olimpico into raptures, were it an inch or two lower. The goals will make the headlines, but his performances are really bringing another dimension to the side. 7

Mirko: Roma's most lethal attacking weapon in the first half, with the Viola having absolutely no answer to his slalom runs - particularly Felipe Melo, who was absolutely school at one point. Unfortunately he's developed a rather severe case of Pippoitis, and can't seem to time his runs. If he does, the goals will flow. An extra tip of the hat for the extensive hustling he did today, and particularly chasing back. Don't expect to see that from the striker asked to play furthest up the pitch, and his tireless work was evidenced by how excessively gassed he was in the final half hour. So much so I expected Menez to come on for him - was under the weather this week, after all - instead of Il Capitano. 7

Totti: What a one-timed finish. And even better, should've had two. But once again, when the rest of the lads were tired towards the end of the game, he upped the workrate, as a good captain should, and picked up the slack when needed. 7.5

Loria: Fortunately, I'm not sure he had to make a real challenge during his time on the pitch. No complaints by me. A little surprised Prandelli didn't bring in the more dynamic Osvaldo when Simone replaced Philou, though. Something tells me things may not have gone as smoothly. 6.5

Cicinho: Like a jackrabbit on the pitch when he came on - it's been awhile - and dangerously so on one or two occasions. 6.5

Menez: He's going to get a lot of "garbage" minutes when opposing teams are pushing up for an equalizer. That'll be his chance to slowly earn some more meaningful minutes. N/A

And lastly, can we all thank our lucky stars Adrian Mutu's summer move collapse? Today only confirmed his status as one of the most classless acts in all of calcio. The man didn't, nor will he ever, deserve to wear the hallowed yellow and red for even a moment.

Onto Chievo, the team pulling up the Serie A rear. And, with the Roma we know and love back, perhaps an even greater task than this weekend against Fiorentina. Never a dull day...