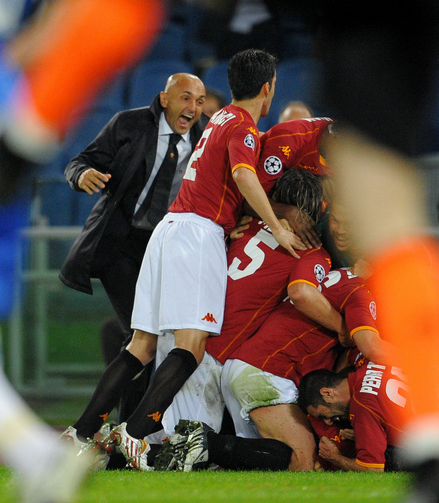 Under the circumstances, pure brilliance. A loss would have been begrudgingly conceded as the most likely of outcomes, a draw graciously accepted as a point of points. A win worth nary even a fleeting dream. And then the skies opened.

Funny, the last win was a Champions League fixture. 3-1, too. The post-game jubilee from the faithful wasn't all that dissimilar either, considering the strenuous climb the win required. Not to mention the winning brace coming from an altogether disappointing striker at the time. But these two games could not have been more different.

Against Bordeaux they were flat, unconvincing, and disjointed; only bound together and ultimately saved by 30 minutes of adrenaline and birthday candles burning low. It was never a victory which instilled a sense of confidence going forward.

Tuesday, for the first time in who knows how long, they were a complete team. Their mental wallowing was replace by overwhelming desire, confidence and a true sense of self-belief. The defense was as stingy as the edition which featured at Stamford Bridge; the attack found that long missing piece of the puzzle some casually call execution. It wasn't perfect and they did have a spot of help, but it was a brilliant, brilliant performance under the lights which had thus far only seemed to illuminate their faults.

Was it The Great Turnaround everyone hopes? Only time will tell. But what we do know is this was a commanding, deserved victory against a team which was not made for the Giallorossi. Chelsea is a great, great team - one of the two or three best in the world as it stands - and they beat them. Beat them good.

It was everything we could have hoped. So here's to more.

My attempt to be lazy turned into creating a flickr account for Roma Offside (mass uploads and all that). A lot of people email me with cool pictures, not to mention the high quality numbers in the comments, and I'm often too forgetful to use them, so this cuts out the flaky middle man (still me). If you want to join, just ask and I'll activate it whenever. (And hopefully I'll finally remember to use the top of the lot for posts.) On display now a slew of images from yesterday's match well worth a look-see.

Far and away my personal favorite: 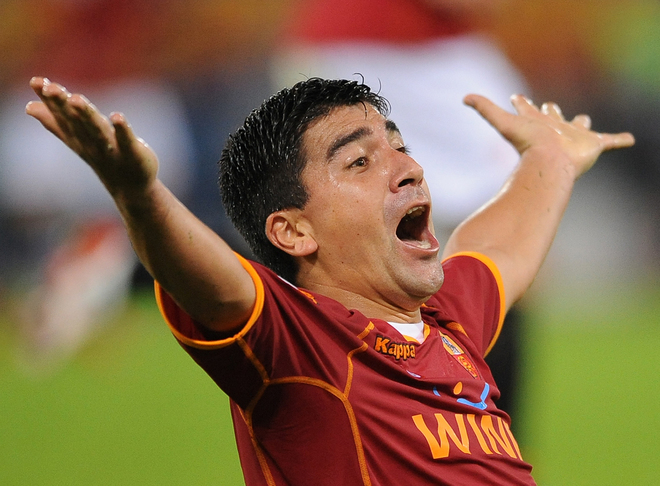 • After the game I roamed the internets for the British perspective on the match - under the assumption most Roma-based publications were still pouring bubbly all over themselves and wouldn't have anything legible til the morning - when I found an absolute gem in a Guardian, normally the one British outfit I can stomach, Liveblog. Shall we?

12 min Roma are hopeless. They're not helped by a palpably nervous atmosphere, but they can barely string two passes together. This is Chelsea's as and when they want it.

i. Totti and Mirko both starting centrally. Mirko up high, roaming, Totti back at treq. Not only because of those two, but also because there were options when Pinballs I & II (Simone & Brighinho - did you see that dance for Mirko's assist?) were making mad dashes in support. Quite lovely, in fact, and will only become moreso when Totti is even hovering around 75%, because he was far from even that today. (No one will ever question his commitment to the cause.)

ii. David Pizarro having - count 'em - one, two, three safety nets. Allowing David to hover just above the three man midfield when Chelsea was on the attack, then drop back and play a deeper, truer playmaker role when in possession really eliminated his Achilles Heel and allowed him to do what we all know he can do: make shit happen. A brilliant game from the little man, and there's no doubt the tactical changes played a large part.

iii. Having an aged man making "overlapping" runs on the left. A staple of the system which has been sorely missed.

iv. Pinballs I & II. What else can you say? Superbly magnificent from both - and yet again from Matteo Brighi, who is going from solid role player to starting XI material in the matter of months. Certainly not a true winger, and the system will need to be adjusted according to opponent on occasion (particularly those sitting numbers back), he can undoubtedly sit anywhere in a four man midfield under the right circumstances.

Far from the finished product, and it'll only be a temporary fix which can create some versatility....

“For the moment this is the tactical path we will take. With (Marco) Cassetti, (Max) Tonetto and the off-form (Rodrigo) Taddei missing, I have to use the more central midfielders and they did a great job, so we can certainly use the rhombus midfield again.”

...but at this point in time, more than enough.

• I think we all remember the 4-6-0, correct? The "strikerless" formation which is/was merely the 4-2-3-1 under alias; or it was until everyone started referring to Totti as a "striker" and thus the "1". Spalletti just went with what was essentially a "wingless" formation - out of necessity again, albeit born from a different crisis - after years with such critical play coming from the wings. Of course, Simone has played out wide in the past (well documented for Azzurri fans) and the fullbacks allowed for width, but Vucinic/Mancini, Taddei and two galloping backs they were not. His mental game will always remain under question until they can show resolve, grit and fight when the going gets tough within a 90 minute window, but tactically, he has few equals. The man is, quite simply, a genius.

And I gladly sacrifice the Juventus trial session for a win against Chelsea under the European lights.

• The first goal - you know, the one from current top scorer and future TIME Man of the Year Christian Panucci - was as painfully textbook as it was painfully necessary. (Can't imagine what an opening goal for the Blues would've done to their collectively brittle psyches.) The goal itself was cut and pasted from a training ground walkthrough textbook. Not, of course, to forget the large contribution from John Terry, who will surely find an extra large fruitbasket on his doorstep for allowing GOMR to ghost in so freely. After all, the only thing to beat JT worse was a Russian pitch.

Goal, Roma. Momentum, Roma. Confidence, Roma. Twas like a 3 in 1 cocktail of various OTC footballing elixirs. Not that I wasn't frightened for my life. But timing can be, and often is, everything. The bipolarity of Roma right now is such that a 1-0 uphill battle could have only served to further their sorrows. Much love, JT.

• Second goal. Appreciate the Brighinho tap dance once again, could we?

• Putting the kibosh on the Deco free kick thing: Technically? That's a yellow card. Even if it's number deuce. As per FIFA. Or UEFA. Or [insert your own acronym here]. Real world application? Incredibly lame way to get smack-ed with a suspension. Then again, if Deco were a cat he was on life nine and a half by the point, so my profession ruling would have been.....pfffffffffffffffffffffft. Free kick. Accumulation of fouls. Whatever. Karma came 'round and all was right in the end. Happy? Happy.

But a commenter somewhere (not here) had a very insightful look at the call which, upon replay, stands true:

So fuck you, Deco. You Brazilian Portuguese Brazilian wanka.

• Towards the end of the game Simone Gloria was warming up (no clue why) over by the touch line and constantly harping in the ear of the linesman. Finally, a positive contribution to the cause.

• Mirko: big game player. Legend. The lot. The man shows up when it counts more often than not, and it's almost as though the Champions League has become his playground. Can't quite think of many more assets I'd rather have out of a striker. Or anyone, for that matter. MOTM.

A glorious evening underneath the nights, one which has been a long time coming and will surely resonate longer. Now back to the trembling night sweats until the weekend arrives. The fight has only just begun.