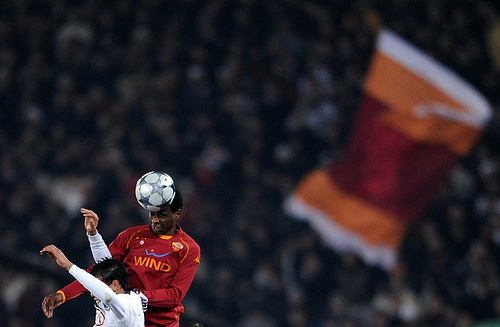 Was looking at the table this week and came across a mildly startling stat: as shitty as the lads were earlier in the season, they're still 4-1-1 at home in the league. The 1-1 coming against two very good teams, mind you. Of course, it's not as easy as a home/away thing - Reggina sucks just a touch more than ass and they received very favorable bounces against Atalanta as their two early home wins - but still, it's something.

Now they're on form, if not on fire, and Cagliari, a relegation candidate despite currently punching above its weight (though I venture to guess they'll inexplicably manage to avoid the drop yet again), is coming to the capital city for a short trip. Their away form? 1-1-5.

You see where this is going? Good.

Cagliari will struggle to score a goal - even with Matteo & Rodrigo out - and Roma, well, won't.

Alberto is being held out until the new year so as to avoid any new/recurring problems, making him fully fit upon his return. Probably the smartest thing the medical staff has done in years. At least their previous calls - you know, like sending him to a facility without medical qualifications - makes this one seem like a stroke of pure genius.

This one's going to be interesting with both Brighi and Taddei out, as we haven't seen anyone else alongside DDR & Simone in the 4-3-1-2 as of yet.

This is how RomaNews sees it and I had the inkling it'd be Cicinho in the middle earlier in the week as well. There have been a couple late game situations when attempting to close out a lead where Spal has played Cassetti at RB and Cicinho a bit further up the pitch. Enables him to join the attack from behind as he loves to do. And who better to help defend a RB than a RB (in a right wing's body)?

RN also seems to think Pizarro will start on the bench (seems reasonable) and Menez will continue to start over Mirko. Not going there.
Predictions

I'm feeling a Riise Rocket - at which point he'll earn the nickname Kawasaki. (Get it? Ah ha. Ah ha.)

And His Tottiness, of course. Dude's en fuego.