A Comeback of Most Magnificence

Share All sharing options for: A Comeback of Most Magnificence 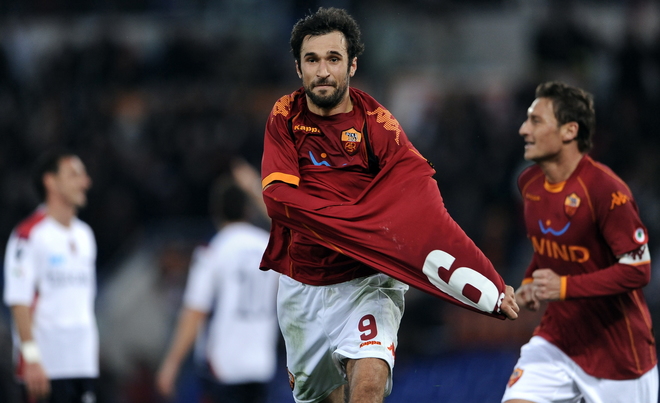 As comebacks go, this one is right up there with the two goal, three minute turnabout against the Rossoneri last year, though perhaps not as sweet because Cagliari ain't exactly Meelan, doggedly resilient as they may be. Problem is....Cagliari ain't exactly Meelan. There was absolutely nothing to be done about the sheer brilliance of young Conti's free kick - I know it's been 9 years, but could he not have saved that for next week? - but the lads easily could've avoided sleeping on the Jeda ball. And then Simone could've been the hero and we wouldn't have needed to see Mirko's underpantaloons. Everybody's happy.

(Speaking of Mirko's underpantaloons, I know Romans in their skivvies ain't exactly a rare thing at the Olimpico (you're on your own searching for the mountains of examples), but does anyone else get the feeling he's a slight bit off his rocker? In a good way, if there is such a thing. Or maybe he's just a big twelve year old. Either way, much as he is loved, I'm desperately hoping to avoid him later in life because he's definitely going to be that batshit old dude who answers the door without pants. Good luck with that.)

Actually, more than Milan in terms of sheer joy and adrenaline in the comeback, it reminded of the trip to the Fruili last spring. Clearly a greater sense of urgency due to time constraints on Sunday, but I couldn't help feeling the minute the Jeda goal went in they collectively thought, "well played, but we're better than you and now we're going to prove it". It was a show of pure strength and superior quality. And they never quit, something which we've unfortunately seen in the past (then again, it may be that "quit" was synonymous with "tired legs from chasing results in a more demanding formation"...). A fantastic combination of quality and fighting attitude right to the very end.

And just as much as it was a gracious three points and a few less weeks off the end of the life, 'twas a learning experience for me:

* - Andreolli has started 15 of 17 games (one red, so surely a suspension in there) for the 3rd stingiest defense in Serie B, before anyone asks. What that means I haven't the slightest, but chances are he can't/won't be called back.

Artur: Second goal was soft, but we've seen a lot worse from Doni. A lot worse. 6.5

Back line: I thought they all played rather similarly: not quite wonderfully, not quite poorly, maybe a bit above average. Nothing could be done about the Conti free kick but GOMR was caught napping for the second and just before that Jeda should've put in yet another. Needed to be a bit better as a whole - including the Juan shift in the first half. 6.5

Cicinho: No, not his position, but a stupid foul which led to the Conti free kick. No need to throw a shoulder there. But typical Cicinho going forward. 6.5

DDR: Along with Perrotta enormous as the two man midfield late in the game. They cleaned up acres upon acres of space together. 7.5

Perrotta: I'd started to worry maybe age was catching up to he and his rapidly increasing odometer earlier this year, but no longer. The last 20 he really put in a world class, jack of all trades performance when they needed it so dearly. MOTM and the biggest difference between zero and three points. 8

* - He may be a bit more reserved that Mexes, but he's no less Roman. Bleeds yellow too.

Baptista: Really just not shining in the 4-3-1-2. It's not that he's been bad, just rather average. It'll be interesting to see what happens when the team starts playing with a bit more width, stretching the defense and not requiring inch-perfect touch and passing (but maybe he should still petition Santa just in case). 6.5

Pippo Vucinic: What do you say? I would've yanked him for Menez. Pretty sure everyone not named Luciano Spalletti would've done the same. He was ineffective to put it kindly - though not so in the first half, when he was incredibly dangerous and inches away from a sensational goal - and coughed up the ball like it was SARS. Runs became a bit lazier too, and reverted back to Pippo Vucinic. But as is the case with any great striker, they can be utterly useless for 89:59 and all that matters is that one second. 7

Totti: Class goal, class play, typical Totti. Had he scored that insanely audacious chip from the right hand of the box I think I may have fainted. Only a few players in the world can even attempt that and not look foolish. 7.5

Menez: Lots of kudos to Mirko for the finish, and it was off a Cagliari touch, but Jeremy deserves a ton of credit for that drag back and burst before centering the ball into an incredibly dangerous and promising position in the box. Not every moment will be brilliantly effective, but when it is his moment it sure is brilliant. 7.5 (Just for creating that goal.)

Montella: The prime is long past, but a valiant attempt when he's got no match fitness to speak of. N/A

The clean sheet streak is long gone thanks to old boy Daniele (and Roman nap time), but that's seven wins on the trot, eight in nine. Another huge test next weekend up against Catania and their 6-1-1 home fortress. Until then, let's enjoy an icy dish of revenge midweek against Bologna.