How To End The Year On A Low Note, by AS Roma.

Share All sharing options for: How To End The Year On A Low Note, by AS Roma. 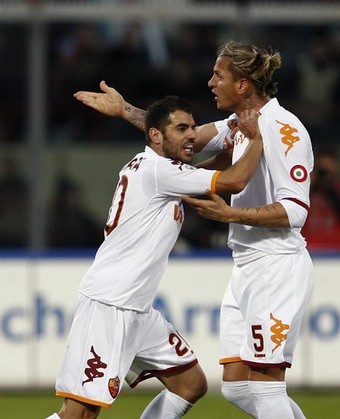 Utterly and undeniably inexcusable. At least that's what the naked eye wants to tell. Twas an awful lot like the first hour of the Bordeaux game, except for three things:

i. No one was running on birthday glee. Holiday glee = stress, so that's out the window too.
ii. Catania wasn't down to ten men.
iii. Catania ain't French.

Spalletti could've lined up eleven freshly stiff cadavers and they would've looked more lively and filled with more purpose than the lot today. Add this to the fact that a number of players had quite possibly their most abysmal games in giallorosso - Juan & Baptista, I'm lookin' at you - and you have a recipe for disaster, which this was. The defense which more often than not neither bent nor broke in recent weeks bent, broke and imploded in awesome fashion on a number of occasions. They're lucky Morimoto is still finding his finishing booties, or else his brace would look an awful lot more like brace x 2 or 3.

When things go this spectacularly poorly you can't pinpoint one or two things and say, "this is what's wrong, this is how we can fix it". This was merely one of those games where Spalletti needed to go into the postgame locker room and make Fergie hurling a boot look like splash time at the bikini carwash. Obviously not exactly in the Spalletti playbook, but I'd like to think the visitors dressing room at the Massimino is only hanging on by a thread at the moment.

I'm willing to say they did look awful tired - many of these guys have been playing game in, game out for the last 6 weeks - but there's a break coming up and they certainly had enough in the tank to leave it all on the field for 90 minutes. Just a poor, poor game.

Seriously, the only person who might, just might, deserve any thing other than a rating somewhere around fuck you is Menez (and Totti, of course). Then again, he may only have looked half-decent by comparison, so he gets lumped into the rest. (Alright, maybe a couple more, but you get the picture.)

Baptista was bad, yes, but in a much less critical position.

I was a huge advocate of Juan's buy. I thought he was a pure stroke of genius as Chiv-who's (ahempredeterminedahem) replacement: better tackler, less prone to epic, epic blunders and they made a €10m profit, or thereabouts. (Unfortunately he - and Aquilani...and Taddei...and Pizarro...and... - was passed Chivu's injury torch.) This was a Chivu game. This was Chivu at Old Trafford. This defense has issues with pace, but I've never seen someone shred this defense so easily as a freakin' 20 year old kid with all of four Serie A goals in his CV - most of which went through/around/past Juan. With his skills and a 26 year old's composure had at least four in the bag today. Ridiculous. Not that Juan is alone in blame, as his comrades weren't much better or were equally as bad, but Tubbs can be hung with two goals that were and two shoulda beens. Far from his finest hour.

However, all of this might be a good thing. Going into the break with a 10 game win streak may have allowed for a certain degree of complacency. Not now. Now they have to go into the break like the Champions League final is on Sunday morning. I expect to see an incredibly motivated and invigorated team against Beckhamania when they return, and perhaps that's just what they needed.