Rumor Mill & A Touch of News

Share All sharing options for: Rumor Mill & A Touch of News 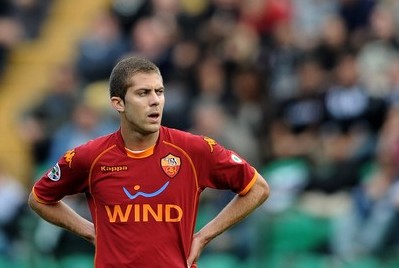 Of course it was. Have you ever seen a more miserable looking bastard in your life than Jeremy Menez? He makes most French look like goddamn Care Bears. I'm sure he just forgot to take his Prozac and he'll be fine.

But seriously, one can really see how his frustration would be mounting. Everyone wanted him and he came to Roma, where he started out the year as a solid part of the starting rotation. While he was part of said rotation and getting major minutes the team sucked. Now he's not getting minutes and the team's good, not to mention in a formation which won't feature his skills nearly as much as the 4-2-3-1 would. Jeremy probably doesn't foresee a ton of playing time for the rest of the year, and he just wants to play and develop. No harm there. You want players who want to play.

But Spalletti's giving him minutes here or there, and the more good performances he strings together, the more his minutes and impact will grow. And a goal would do absolute wonders.

Journo: "A player that you particularly dislike aside from Nedved?"
Philou: Nedved.

But more importantly, Philou has absolutely no plans of leaving Rome.

"I will not leave Roma. Even if we don't get into the Champions League, it is enough for me to be in Serie A with a Giallorossi shirt. If the club decide to sell me then we will have to see, but I have so much love for Roma."

Sebastian Dubarbier: I was way more impressed with this cat than Julio Culio, or whatever the feck his name is, the first time around against Cluj. Pacy, technical, dynamic and still very young (22). Spalletti also singled him out before the second round, and I suspect that may play some part in this rumor, as it doesn't seem a left winger is really high up on the list of needs right now.

Unless, of course, Menez does go out on loan...which he won't. I don't doubt Spalletti's admiration, but unless we see the 4-2-3-1 come back pre-Christmas, I'd have to say a more versatile winger-cum-forward is more likely in the event they do make a January purchase.

Juve & Atletico Madrid also sat up and took notice, which won't help attempting to sneak him into Trigoria unless they pull a Philou - which, with this damn financial crisis and all, isn't really out of the question. And I'm not saying I'm totally against it.

Down the line, though, this kid's probably worth a serious look.

Franco Zuculini: Reportedly another name brought up in the meeting between Prade and Salvatore Bagni yesterday, along with Emmanuel Salvio. Another Argie, he's billed as the 'new Mascherano', as Salvio is the 'new Lavezzi'. Everybody's somebody else.

Whether this team needs another prowling DM is highly questionable and with Liverpool, ManU and Juve after him, it just seems like he'd be money best spent elsewhere. Plus he's too young to make any sort of solid contributions. Maybe one day, now seems a stretch.

Diego Lugano: Strong, bullish Uruguayan centerback for Fenerbahce. I remember four years back reading that he was supposed to be one of the next great CB's coming out of Sao Paolo, but he hasn't quite ascended to those lofty heights. Still a high quality defender and would be an enormous upgrade over Loria. Contract is up in 2010 and Fenerbahce ain't exactly all that good right now, so he may want to try his hand at one of the bigger leagues. Problem is Fener asked Milan & Juve for €10m+ in the summer, which means even if his contract is running up in 18 mos or so, he still won't be cheap. That and his nickname is positively frightening:

He is better known as Tota, which means "howler" in Spanish.

That's an ominous pseudonym if I've ever heard one. That'd be like nicknaming Doni "Butterfingers" or Mirko "Simone Perrotta".

Who knows, but a CB in the January window doesn't sound all that impossible a dream.

Alberto Fontana: In a swap for Artur.

What the f*ck? This makes no sense.

Marcelo Zalayeta has also been placed on the radar, but I'm ignoring that one just like the lump in my breast.

Last but not least...

Bad news for the gamers in the crowd: you can nevah evah play Pro Evolution Soccer again. Evah.