The Ghost of Cassano Returns in Verona

Share All sharing options for: The Ghost of Cassano Returns in Verona 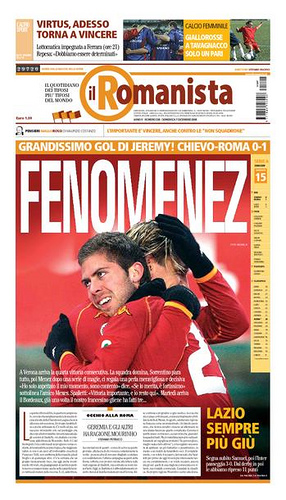 This game all too eerily mirrored the Sant'Elia encounter last year: Roma peppering a good but not great goalkeeper with shot after shot after shot yet unable to break through. Last year it was Marco Storari fresh out of the Barry Bonds/Lance Armstrong Camp for Undetectable Doping; this year Stefano Sorrentino fresh out of footballing purgatory, aka Greece. Fantastic game from him. A wonderful addition to any Serie A side next year when Chievo gets relegated.

(The great difference? Matteo Ferrari's finishing skills were prepping for the Derby della Lanterna, not lacing up in Kappa. But a big thanks for passing on his knowledge to Cicinho before he left.)

Speaking of, on the grand plane of Italian calcio, I think the last six weeks have detailed the extraordinary quality the promoted sides brought to the campaign last year. Serie B coughed up Juventus, Napoli and Genoa like a bad hairball (the taint of Calciopoli will do that) at the end of 06-07 and those three contributed immensely to the quality of the league. Rivalries aside, those three teams make Serie A a better place - though you certainly won't find a single tear shed here should Juve be relegated back to the dungeons for all of eternity, and rightfully so.

Bologna, Lecce & Chievo? Yeah, not so much. To be fair, I don't think Lecce can possibly perform as abysmally against anyone as they did against la magica. On the other side of the coin, I'm not sure Chievo can perform much better. They're headed right back down whence they came, Sorrentino or not. End of.

Story of the Roman day was Monsieur Menez, aka Fenomenez, aka Baby Cassano, aka The Best Thing Since Sliced Bananas, who learned a very dangerous lesson that whining in the press + injured star = playing time. The next time Mirko goes down for a short time - knee, cold, AIDS, etc. - we can expect lots of Menez to [insert random French club here] rumors with a response from Jeremy saying, "Sure, if they want to sell me because I'm not getting enough playing time in Rome [random club name] is a great club and I'd be thrilled to play for such a side." Criminal.

But seriously, there were an awful lot of moments where the new #24 looked like the old #18 in all the right ways. Can only imagine Totti felt the same as he was being spoonfed class backheels. Kid's an amazing talent who will rule the world over once he becomes a complete player. Hopefully the goal gave his confidence the massive kick in the ass it needed to get that whole rule the world part a little jump start. Will be interesting to see how highly Spal rates this performance and whether or not he thinks one of the forwards can sit - say against Cagliari - for a rest, not because of injury. Though we can be nearly sure he'll get his chance against Bologna in the Coppa on the 17th.

In the end the performance far outshone the scoreline, and this is one the boys can feel good about. Sometimes you simply need a moment of individual brilliance to break through and they certainly got that in Verona. But perhaps most importantly: 7 games, 3 goals conceded.

Welcome to the new Spalletti football.

Magically switched casts at halftime, anybody else notice? 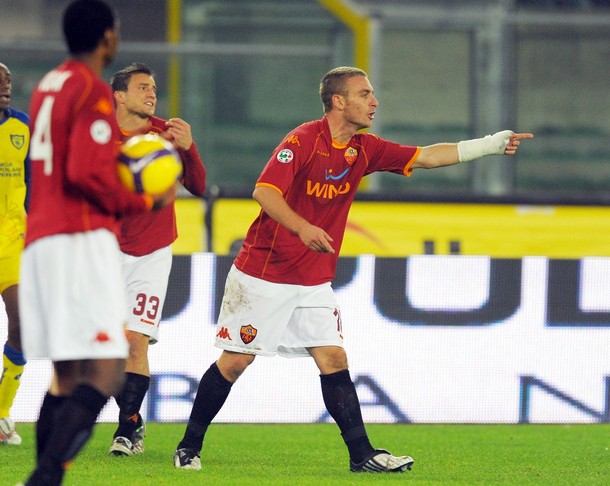 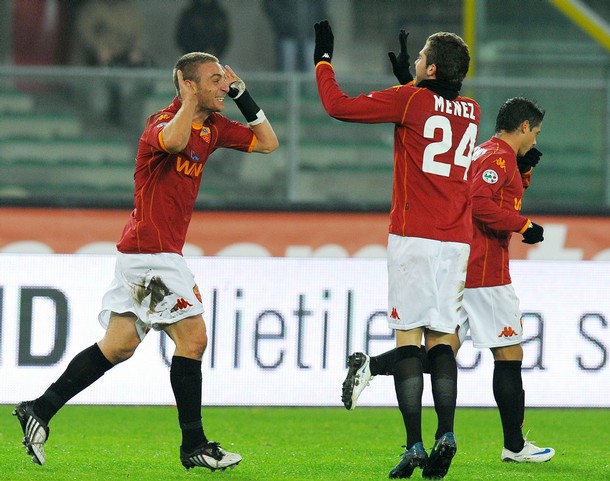 There was one play where he was absolutely bundled down near the Chievo box and forced to break his fall by placing his hands on the ground. But am nearly sure it was in the second half. Guess it was merely a fashion thing.

ESPN's brilliant new innovation Match Action - which, among other things, shows the average positioning of each player throughout the game - has been making the rounds and for good reason: it gives us yet another opportunity to question what the fuck goes through Cicinho's head. 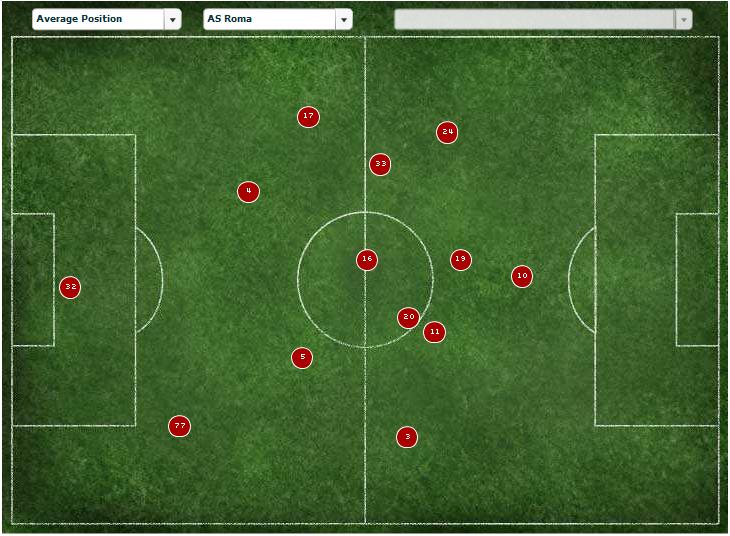 Alright, given that Chievo brought next to nothing going forward and he did push up a tad when Cassetti came on it's forgivable, but still bears watching considering Cicinho's positioning rivals that of quadriplegic kama sutra.

* - Should be mentioned, with Cicinho playing so high and Menez drifting so wide, this was at times the closest thing we've seen to the 4-2-3-1 yet. Of course, it's easy when you have no worries about anything coming in the other direction.

Cicinho: I was given a choice: either blood pressure medication or stop paying attention to The Flying Donkey. Pfffffffft.

Crockett & Tubbs: Bossed it like Miami in the mid-80's...and without lookin' for a heeeeeeeeeartbeeeeeeeeeat. 7

Riise: Shockingly, I'm not sure one can pay a higher compliment: at multiple points on Saturday I watched a Kappa kit fly into a world-class tackle, thinking "typical DDR/Mexes", only for a certain ginger-haired Norwegian to rise to his feet. That's two quality games in a row now from JAR. Just you watch. Just you watch. 7

Simone: Typical Simone game: immense but understated. His runs beyond the ball at treq after Baptista came off really took the team's capabilities to another level - especially with Menez making love to the left hand touch line all game long. 7

DDR: The older he gets, the more I'm convinced he spends every night watching this clip of His Tottiness and practicing. 7

Rodrigo: Night and day with Fiorentina. 7

Francesco: Were it not for Menez and Sorrentino, he would've been the talk of the town. Yet another vintage performance from Il Capitano. 7.5

Menez: Man of the Match and now man of the moment. Given his midweek frustrations and the fears that Roma could possibly lose such a frighteningly phenomenal talent, the spotlight was firmly on him and did he ever deliver. At times he did go missing - and he still rivals a broomstick for balance - but he's not yet, and may never be, a 90 minute minute-to-minute player. His impact will come when on the ball in moments when he can take on all comers, saying with his feet "I'm simply better than you". Still a long ways to go, but they've finally replaced Cassano. Future is oh-so-bright. 8