Share All sharing options for: Coppa Time: Bring On Inter The following statement, written in September, only seems to be gaining steam:

Wow, "Calcio Honesty" and "Inter" in the same paragraph. Who knew?

So what do you think this year has done for my feelings towards Inter? Butterflies and cupcakes and unicorns, right?

This game isn't so much about the Coppa Italia as it is about Inter, because I honestly feel like they have more to lose from this than Roma. If Inter wins...great. We'll still spend every two days in the summer hearing about the occasional crutch they were handed, along with quotes from intelligent footballing minds saying Roma was the better team. An Inter win here proves little.

But if Roma wins, it adds more ammo to the theory that Roma is the best team in calcio. Both teams have injuries which are essentially a wash (Cambiasso plus Zlatan almost equals the loss of Totti), so that's out the window. Both teams have Brazilian goalkeepers, and neither one is Dida, which is a wash. Both teams will have a banged up back line, so that's a wash. Basically the only thing which isn't a wash is the brainpower patrolling the sidelines and the payrolls.

The great trump card here is obviously Spalletti. For all the trillions of lira Moratti has spent, he still has a meathead on the sidelines, whereas Roma has a top drawer mind at the chalkboard; and he's had a week to get ready for a team which rarely throws a tactical surprise at you - at home no less. If it comes down to bringing 15m striker after 15m striker off the bench or having Spalletti? No contest. The Grand Imperial Poobah twelve days a week.

The one thing I hope Spalletti instills into the team is that this isn't be about revenge, it should be about Roma proving itself to be the better team. Emotion in front of the crowd will be fantastic, no doubt, but if they stick to tactics and keep a collective cool, Roma will have to say no words, the play will speak for itself. (I won't begrudge Mexes or DDR a fiery moment or two, however.) And really, that's all that Roma needs to show. Just play as Roma can play and it will be a great day.

And win or lose, I think we all need to enjoy this one. Three months without Roma is a mighty long time. 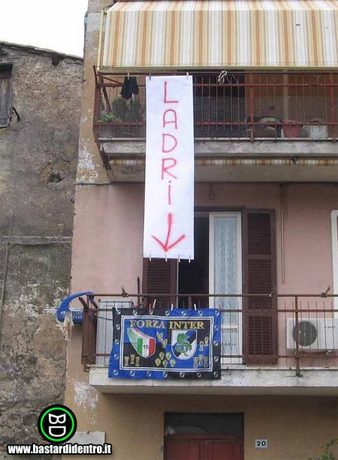 * - Much thanks to Ezio and Lorenzo for the pic. Great Romanisti think alike.

Inter: Cruz & Macellazzi* are suspended (absolute shocker there), while Cambiasso & Zlatan are out injured.

* - Thanks to Chico for bringing that one back.

Really doubt we see anything else aside from some rotation on the right flank.

Roberto Mancini v A Down Syndrome Baboon: Let's face it, the guy isn't even close to the same league as Giancarlo Camolese, much less Luciano Spalletti. So comparing the two would be both unfair and imprudent. A down syndrome baboon at least gives Mancio a chance - albeit a very slight one.

And may I just say....Grazie Moratti. Keeping Mancio on is the best thing you could've done for the other 19 teams in Serie A. There's a fetus somewhere drawing up better schemes in his mother's womb than Minchia could diagram on his best day.

Really, that leaves just one person to worry about without question, and that's Julio Ceasar. (And by without question, I mean someone consistently fantastic over a lengthy stretch for all you Balotelli nuthuggers in the crowd.)

Of course, maybe Mancio will hit his head and insert Toldo into the lineup. Mmmmm, Toldo back between the sticks in Rome. Good times. Good times.

But seriously, Inter is two vastly different teams with and without Zlatan. The fact that he isn't even on the bench is a very good thing for Roma.

Roma v Chivu: Speaking of leaky sieves, it's a big game and Cristian Chivu will be in the house. If he plays it's 12 v 10. And then pray the other inevitability, an injury, doesn't happen til the 90th minute or so.

Roma v The Ref: So is Morganti on the payroll or what? Do you think bookies have closed the odds on an Inter penalty after the 70th minute? Perhaps a Mexes red has already been lined up again.

Let's at least hope Lega Calcio ends the season with a sliver of credibility. After this season, they could use it.

Pride v Players In Their Last Game For The Shirt: With it being the very last game of the season - and thankfully with the Euros this will feel like a short summer - it's inevitable a few players will be swapping giallorosso for the last time. The only guy I think we can absolutely agree is gone is Mauro Esposito. No tears shed there, but I think he deserves a helluva round of applause for staying exceptionally professional this season. Let's face it, he could've gone to Napoli and been a hero for the hometown side, only to take a chance at Champions League footy with Roma. Spal said it a few weeks ago: day in, day out he comes and works his ass off without complaint for the betterment of the team and The Poobah can't help but feel for him, the squad is just simply "closed". Many guys with the potential for a national team call up would've been bitching and moaning to the press long ago; so really, he deserves a lot more for his contributions (or lack thereof) off the pitch than perhaps is given. Grazie Espo, and let's hope he bounces back next year, wherever he lands. It's never regretful to see classy, gifted guys shine.

As for the other guys, Matteo Ferrari seems likely, but he's not playing. Ludovic Giuly is potentially gone, and it remains to be seen how much time he'll see - more likely than not it'll depend on the scoreline in the second half. Pizarro, Vucinic & Aquilani? You'd need to have a world class argument to convince me any of that trio will be in anything but giallorosso next year. Brighi is a possibility, but that's also unlikely - Spal seems to really appreciate his contributions.

Then there's Mancini. I think everyone and their mother thinks he'll be elsewhere in the summer, but there's really no way to tell right yet. What we need from him is anything but an egg, really. Anything more than that and I'll be happy to give him a standing O at the end of the game. And perhaps if he plays like it's his last game in the shirt, it may turn out not to be.

Let's hope Mancini plays this one with his heart. We all know there are only a handful on the planet who can match him when he does and I'd love nothing more than to go into the summer knowing that he will either go out on his shield or have a little bit more to give to the cause than we thought. Forza Amantino.

It's in your city, in front of your team and this one is in your hands. Take this one for Totti. Unless Ludovicious turns into a wide receiver going over the middle again, I think we can throw out the loss in September. Inter is just too strong a team, especially when Zlatan is in form, to go down a man against and have a true result come out. It was always downhill from there.

The SuperCoppa was so long ago it's hard to recall what actually went down. De Rossi and Aquilani absolutely bossed the midfield and Totti was able to work his magic along with finding himself on the right end of a typical Burdisso tackle. It was still a preseason affair with many players out via injury, so a game at the end of August is not one to provide a blueprint for a game at the end of May with vastly different lineups.

As for the game at the San Siro in February, well, let's just say if Rosetti (twas him, correct?) could discern a dive from a foul we'd be talking about a deserved three points. Pretty bullshit ending to the game, really; but that's par for the course when going up against the Nerazzurri, so clearly Roma was at fault. They should've had a 3-4 goal cushion going into the late stages to rightfully squeak out with the three points. You've got to know these things going in.

(Sadly, only half of that is laced with sarcasm. It's almost true.)

What does all this mean for the upcoming game? Only that an even strength Roma has proven to be a better team than Inter. (2-1 on aggregate, if you'd like to get technical.) I hope we'll see much of the same.

Roma shows everyone who the best team in Italia really is.